Like And Trust Your Doctor? It May Lead To More PSA Tests Even If The Government Wants Otherwise
By News Staff | March 22nd 2021 11:54 AM | Print | E-mail

Male patients who have a single general physician were more likely to receive a prostate cancer screening test during a period when the test was not recommended by the US Preventive Services Task Force. Greedy doctors? No, the tests don't pay enough money to be meaningful, it is that doctors invariably prefer to side with patients over insurance companies or government protocols.

While there is no obvious downside to such practices, unnecessary tests, including due to defensive medicine strategies designed to prevent lawsuits, has caused the price of health care to increase dramatically. Defensive medicine costs, plus private health insurance premiums 700 percent higher since passage of the Affordable Care Act, puts an increased strain on those with the least ability to pay.

In 2012, the US Preventive Services Task Force recommended against prescribing the prostate specific antigen, or PSA, test, rating it a grade D test and concluding there is moderate or high certainty the test has no net benefit or that the harms -- including false-positive results, overtreatment and treatment complications -- outweigh the benefits. This recommendation stayed in place until May 2018, when the task force upgraded the PSA test to a grade C, one that is selectively offered based on a physician's professional judgment and patient preferences. While use of the PSA test declined between 2012 and 2018, a significant portion of men continued to receive the test during that period. 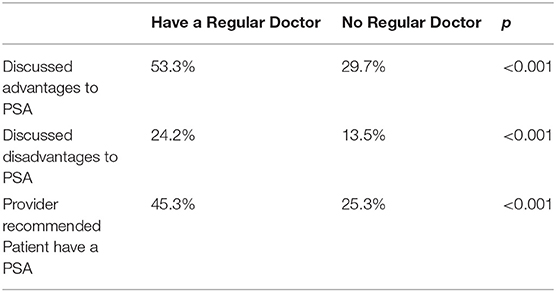 For the study, the team analyzed data from the Behavioral Risk Factor Surveillance System, a nationwide system of health-related telephone surveys that collects data about Americans' health-related risk behaviors, chronic health conditions and use of preventive services. The team looked at data from 2016, four years after the task force's recommendation against PSA tests. They evaluated responses from men ages 40 and older with no symptoms or family history of prostate cancer. Survey questions asked if participants had a single personal doctor, if they had ever received a PSA test and what recommendations or advice they received about PSA tests from health care professionals.

Among 232,548 men who responded to the questions, nearly 40% reported receiving a PSA test during the timeframe when it was not recommended. Having a single personal doctor was associated with discussion of both advantages and disadvantages of PSA tests, but also a recommendation to receive a PSA test.