Low Power Microbes Discovery Could Shake Up The Search For Life On Other Planets
By News Staff | August 6th 2020 07:56 AM | Print | E-mail

News Staff
We eat various foods and our metabolism converts it to energy our bodies can use. This is a hallmark of life, across plants, animals, algae and bacteria. Energy is a defining characteristic of living.

But how little can an organism really live on? In the extreme environment of the seabed, answers may be found. New research finds that an entire biosphere of microorganisms - as many cells as are found in all the Earth's soils or oceans - has barely enough energy to survive. A few zeptowatts (~1×10−21.)  But they do survive, for millennia. Many of them exist in a mostly inactive state. They do not grow, do not divide and do not develop further. They're not dead, but these microbes use so little energy it's difficult to understand how they can be alive, much less have lifespans of thousands of years. 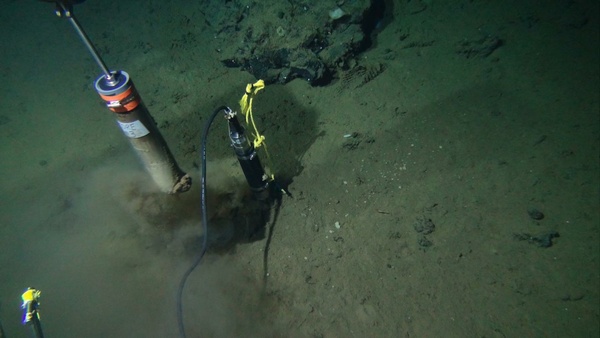 The researchers used data from drill cores worldwide for their work, exploring the last 2.6 million years of Earth history, known as the "Quaternary" period. The data were incorporated into a model that depicts the global availability of energy in the seabed. The researchers then created a global picture of the biosphere beneath the seafloor, including the most important life forms and biogeochemical processes.

By extending the habitable limits of life to environments with lower energy availability, the results raise fundamental questions about our definitions of what constitutes life and the limits of life on Earth and elsewhere. With so little available energy, it is unlikely that organisms could reproduce or divide, but instead use this tiny amount of energy for "maintenance" - replacing or repairing their damaged parts. It is therefore likely that many of the microbes found at great depths beneath the seabed are the remains of populations that lived in shallow coastal areas thousands to millions of years ago.

Unlike organisms on the Earth's surface that operate on short (daily and seasonal) time scales corresponding to the Sun, it is likely that these deeply buried microbes exist on much longer time scales, such as the movement of tectonic plates and changes in oxygen levels and circulation in the oceans.

That also means that life elsewhere could be in a low power state, existing for thousands of years or more. If microbes require only a few zeptowatts of power to survive, there could be remnants of surviving life beneath the icy surfaces of other planets. These organisms might have been dormant for a long time, but would still be technically 'alive'.