News Staff
Even if you are obsessed with "natural" things, the awesome power of physics can still help you make fun colors. It's all thanks to “structural color,” the ability of an object to generate color simply by the way light interacts with its geometric structure.

“The typical way you get color is with dyes or pigments, which have molecules that selectively absorb and scatter specific wavelengths of light,” said Lauren Zarzar, assistant professor of chemistry at Penn State and a leader of the research team behind a new paper on the subject. “Structural color is different. It’s a product of light interacting with a material in a way that causes light interference. Structural color is often iridescent and the color we see depends on the angle we are looking from and the angle of the light. We see it in things like opals, butterfly wings, beetles and bird feathers.”

The team first noticed the phenomenon while studying transparent droplet emulsions made from a mixture of oils of different density and water-based surfactants — compounds that reduce surface tension in liquids and are used in soaps and detergents. They were observing the droplets’ interactions in a clear Petri dish, when they noticed the drops appeared surprisingly colorful, and the colors changed with viewing direction. Subsequently, the team was able to produce the same color effect by simply allowing water droplets to condense on the lid of a Petri dish filled with warm water. 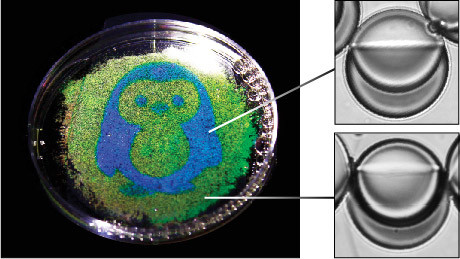 An image of a penguin reflected from oil in water droplets; images of each type of droplet reflecting the blue and green light are shown. The penguin is made by using a light responsive surfactant and photopatterning the droplet shape. IMAGE: Zarzar laboratory, Penn State

Where does the color come from? Initially, the researchers thought the color might be caused by the same phenomenon that produces rainbows. Rainbows form when sunlight enters a spherical raindrop and is bent, or refracted, off the back of the raindrop, before reflecting back out at a different angle.

The droplets that produced color are not perfect spheres like those that form rainbows. Instead, both droplets of water that condense on a surface and the internal structure of the specialized oil and surfactant droplets have a hemispheric — or dome-like — shape. Light behaves differently in hemispheres than it does in spheres. Specifically, the curve of the hemisphere and the sharp change in refractive index — a measure of how fast light passes through an object — between the inside of the hemisphere and outside of it allows an optical effect that is not possible in perfect spheres: “total internal reflection.”

Total internal reflection occurs when light hits a boundary between substances with different refractive indexes at a specific angle such that one hundred percent of the light is reflected, rather than losing some of the light to refraction. By contrast, rain droplets that form rainbows only reflect about five percent of the light that enters them. The rest of the light is transmitted.
Once light makes its way into one of the hemispherical droplets, the researchers found that it can take different paths, bouncing two, three, or more times before exiting at another angle. The way light rays that have taken different paths through the droplet add up and interfere with each other as they exit determines whether a droplet will produce color or not.

“It’s like kids making waves in a pool,” said Mathias Kolle, assistant professor of mechanical engineering at MIT and an author of the paper. “If they do whatever they want, there’s no constructive adding up of effort, and just a lot of mess in the pool, or low random wave patterns. But if they all push and pull together, you get a big wave. It’s the same here: If you get waves in phase coming out for a particular color, that color is more intense.”

The researchers developed a model that predicts the color a droplet will produce, given specific structural and optical conditions, such as the size and curvature of the droplets, along with the droplet’s total internal reflection. They incorporated all these parameters into a mathematical model to predict the colors that droplets would produce. The model’s predictions were tested in the lab.

You can do it yourself, though making a penguin will take some work

Anyone can produce this affect with a few simple kitchen supplies, you probably have already seen it when stretching plastic wrap over a container of warm food, or on the lid of a clear plastic container. It’s an everyday experience, not a phenomenon that requires complex lab equipment to create.