News Staff
Math and science students do better who take music courses score significantly better on exams than their non-musical peers, and so do all students, according to a recent paper.

This is a hot topic in education. Some argue that vocational schools should make a comeback, and that students interested in math and science should focus on that rather than music, the way musicians practice rather than taking more science classes, but a look at 112,000 Canadian students shows it's not a two-way street. Some will do more art or music and not benefit from more STEM courses, perhaps because they already do fine. But STEM students benefit from arts.

The researchers examined school records for all students in British Columbia who started the first grade between 2000 and 2003; completed the last three years of high school; had completed at least one standardized exam for math, science or English (10th or 12th grade); and for whom they had appropriate demographic information (e.g., gender, ethnicity, neighborhood socioeconomic status).

Also read: Do Musicians Have Higher IQs Than Non-Musicians? Yes

Of the more than 112,000 student records studied, approximately 13% of the students had participated in at least one music course in grade 10, 11 or 12. Qualifying music courses included concert band, conservatory piano, orchestra, jazz band, concert choir and vocal jazz. General music or guitar courses did not qualify as they required no previous music experience and, in the case of general music, did not require music-making or practice. 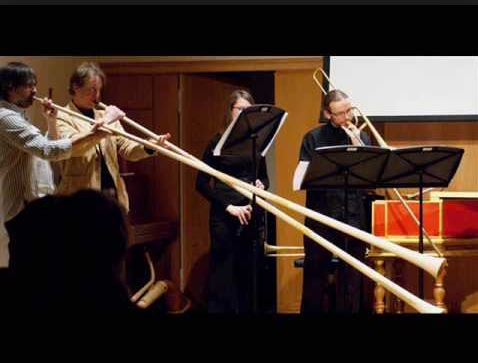 Add in some history with a lituus, Bach’s forgotten horn which has been recreated.

On average, children who learned to play a musical instrument for many years, and were now playing in high school band and orchestra, were the equivalent of about one academic year ahead of their peers with regard to their English, mathematics and science skills, as measured by their exam grades.

The associations were more pronounced for those who took instrumental music rather than vocal music.

Also read: To Jazz Musician Brains, Music And Language Are A Lot Alike - But When They Play, Something Different Happens...

These associations continued to be significant even when the researchers controlled for demographic factors such as gender, ethnicity, socioeconomic background and prior achievement on similar exams in seventh grade.

Science and math can be solitary, and plenty of great scientists have done just fine, without ensemble music experience, but learning to play a musical instrument and playing in an ensemble requires reading music notation, eye-hand-mind coordination, keen listening skills, team skills for playing in an ensemble, and discipline to practice.

Those can all enhance children's cognitive capacities.

Music programs and programs for gifted students are often the first to be sacrificed at budget time because 'those kids will be fine' but instrumental learning and playing in a band or orchestra may be the very thing that improves all-around academic achievement and an ideal way to have students do better in school.
News Articles
More Articles All Articles
About