Mitochondria Send Out Cellular Distress Signals When DNA Are Damaged, Like In Chemotherapy
By News Staff | December 16th 2019 11:44 AM | Print | E-mail

News Staff
Mitochondria, the energy factories in most of our cells that convert the fat, carbohydrates, and protein we eat into a common energy currency used by our bodies, also set off molecular alarms when cells are exposed to stress or chemicals that can damage DNA, such as chemotherapy, according to a new study in Nature Metabolism.

This basic research could one day lead to applied science, like cancer treatments that prevent tumors from becoming resistant to chemotherapy.

Most of the DNA that a cell needs to function is found inside the cell’s nucleus, packaged in chromosomes and inherited from both parents. But mitochondria are special; not only do they have their own genome, small circles of DNA (called mitochondrial DNA or mtDNA), are passed only from a mother to her offspring. Many of our cells contain hundreds—or even thousands—of mitochondria so improperly packaged mtDNA are dealth with biologically, by being recycled when that is possible.

That could also shape how they react to an invading virus—by releasing it from mitochondria and launching an immune response that beefs up the cell’s defenses. 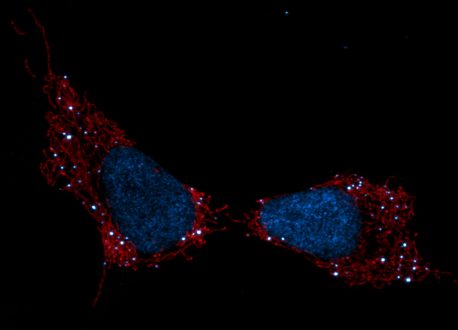 In the new study, scientists focused on a subset of genes known as interferon-stimulated genes, or ISGs, that are typically activated by the presence of viruses. But in this case, the team realized, the genes were a particular subset of ISGs turned on by viruses. And this same subset of ISGs is often found to be activated in cancer cells that have developed resistance to chemotherapy with DNA-damaging agents like doxyrubicin.

To destroy cancer, doxyrubicin targets the nuclear DNA. But the new study found that the drug also causes the damage and release of mtDNA, which in turn activates ISGs. This subset of ISGs, the group discovered, helps protect nuclear DNA from damage—and, thus, causes increased resistance to the chemotherapy drug. When Shadel and his colleagues induced mitochondrial stress in melanoma cancer cells, the cells became more resistant to doxyrubicin when grown in culture dishes and even in mice, as higher levels of the ISGs were protecting the cell’s DNA.

Most of the time it's a good thing that the mtDNA is more prone to damage because it is a warning to protect healthy cells. But in cancer cells, it means that doxyrubicin—by damaging mtDNA first and setting off molecular alarm bells—can be less effective at damaging the nuclear DNA of cancer cells.
News Articles
More Articles All Articles
About