Mounting levels of atmospheric carbon dioxide reduce the medicinal properties of milkweed plants that protect monarch butterflies from disease, according to a recent experiment.

Milkweed leaves contain bitter toxins that help monarchs ward off predators and parasites. The study looked at how elevated carbon dioxide levels alter plant chemistry and how those changes, in turn, affect interactions between monarchs and their parasites. Milkweed is the sole food of monarch caterpillars. In a multi-year experiment, researchers grew four milkweed species with varying levels of those protective compounds, which are called cardenolides. Half the plants were grown under normal carbon dioxide levels, and half of them were bathed, from dawn to dusk, in nearly twice that amount. Then the plants were fed to hundreds of monarch caterpillars.

The study showed that the most protective of the four milkweed species lost its medicinal properties when grown under elevated CO2, resulting in a steep decline in the monarch's ability to tolerate a common parasite, as well as a lifespan reduction of one week.
The four milkweed species differed in their levels of protective cardenolide compounds. The most protective species was Asclepias curassavica, commonly known as tropical milkweed. The chamber-raised plants were fed to monarch caterpillars, and each caterpillar got a steady diet of a single milkweed species with known carbon dioxide exposure. 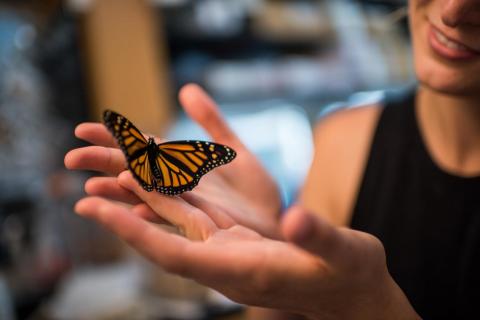 Three-day-old caterpillars were also infected with carefully controlled doses of a common monarch parasite that is distantly related to the malaria pathogen. Ophryocystis elektroscirrha is a protozoan that shortens adult monarch lifespan, impedes its ability to fly and reduces the number of offspring it produces.

Over about two weeks' time, the infected caterpillars grew to a length of about 2 inches, with striking yellow, white and black bands. Then they pupated inside a hard-shelled chrysalis for about 10 days before emerging as orange-and-black butterflies.

This leads to some interesting speculation. Humans use chemicals in the environment to help control parasites and diseases. Aspirin, digitalis, Taxol and many other drugs originally came from plants.  "If elevated carbon dioxide reduces the concentration of medicines in plants that monarchs use, it could be changing the concentration of drugs for all animals that self-medicate, including humans," said co-author Dr. Mark Hunter in a statement.