News Staff
This winter solstice, Dec. 21st, you'll be able to see something no one has seen since the Middle Ages; Jupiter and Saturn will appear so close together in Earth’s night sky they will look like a double planet.

While we orbit the sun each year, Jupiter needs 12 and Saturn 30, which means every 20 years or so Jupiter laps Saturn, and on December 21st, 2020, the two planets will be just a tenth of a degree apart, less than the diameter of the moon. The two largest planets in our solar system will look to some like a double planet from science fiction. 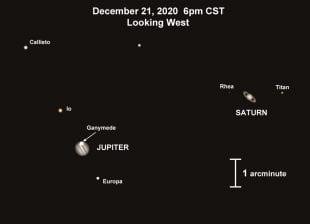 A view showing how the Jupiter-Saturn conjunction will appear in a telescope pointed toward the western horizon at 6 p.m. CST, Dec. 21, 2020. The image is adapted from graphics by open-source planetarium software Stellarium. This work, “jupsat1,” is adapted from Stellarium by Patrick Hartigan, used under GPL-2.0, and provided under CC BY 4.0 courtesy of Patrick Hartigan

People near the equator will have the longest view, and have had such for much of this month as they neared each other. In the north, it is best to look west shortly after sunset because as the evening progresses they dip below our horizon. If you have a telescope, you will also see each planet and several of their largest moons in the same field of view. But the planets themselves are bright enough you can see them with vision alone.