Paper Posits That Daily Solar Radiation Is A Key Factor In Epidemics
By News Staff | November 3rd 2020 08:21 AM | Print | E-mail

News Staff
Viral respiratory epidemics like the flu spike cyclically during autumn and winter - but only in the temperate regions of the globe's northern and southern hemispheres.

In the equatorial belt, they happen all year round, at lower levels.

A new numerical model hopes to provide insight. The authors find that both the prevalence and evolution of epidemics are strongly correlated with the amount of daily solar irradiation that hits a given location on the Earth at a given time of the year.

Ultraviolet (UV) light is able to deactivate viruses and bacteria of many different kinds. Therefore they believe the solar UV light that reaches the Earth is strong enough to have that disinfecting power on the exposed parts of the Planet. The efficiency of the UV deactivation of a particular virus or bacterium depends on the virus or bacterium itself, but, for a given location on Earth, they believe it is greater when the solar irradiation is stronger (summer) and lower when the solar irradiation is weaker. 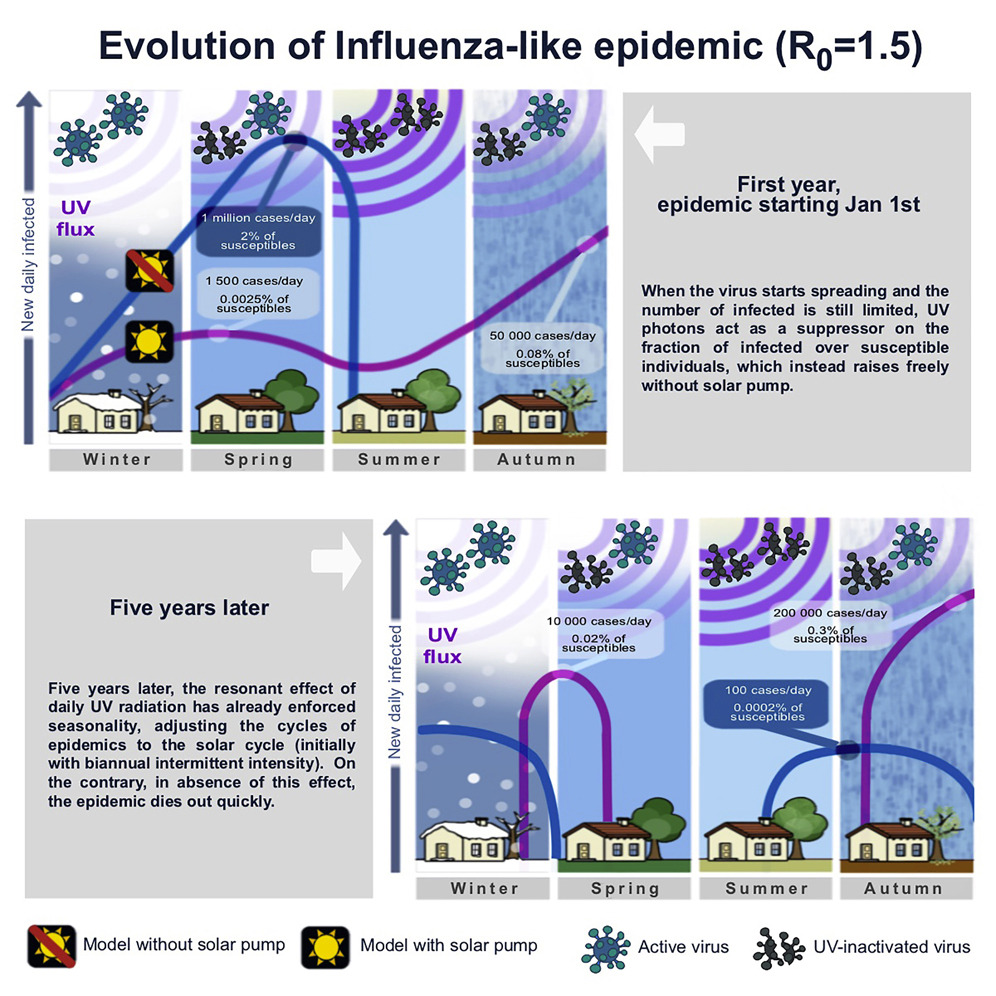 They argue that such cyclicality of the solar disinfecting action, with annual frequency, is able to constructively resonate with another frequency typical of epidemics: the loss of immunity of the virus's host due to its antigenic shift/drift. The combination of these two mechanisms triggers the seasonality of epidemics, on timescales that range from a few years to tens of years, depending on the antigenic frequency.

The model proposed by the researchers reproduces the seasonality observed in different locations of the Earth accurately for epidemics with an intrinsic reproductive number (R0) lower than about 2 - an influenza typically has R0~1 - and is also able to model epidemics with a much larger intrinsic reproductive number, such as the current SARS-CoV-2 pandemic with R0 ~3-4. These models predict high-intensity intermittent initial cycles, which eventually stabilize (on timescales that depend on the antigenic-shift frequency) onto seasonally-synchronized, moderate-intensity annual cycles.

"From an epidemiologic point of view, these models clarify an important and long-standing mystery: why do influenza epidemics disappear every year when the number of susceptible individuals is still very far from that needed to trigger the herd immunity mechanism?" asks Mario Clerici, Immunologist at the University of Milan and the Don Gnocchi Foundation.

The caveat: Their model works with Italian data of the SARS-CoV-2 pandemic but its predictive power depends on the UV-B/A lethal doses for the Covid-19 virus, which they did not measure.
News Articles
More Articles All Articles
About