People Who Abuse Fentanyl And Other Drugs Show An Alarming Number Of Heart Infections
By News Staff | September 18th 2019 07:40 AM | Print | E-mail

News Staff
An alarming number of young, white, poor men who abuse recreational opioids are developing infections of either the heart's inner lining or valves, known as infective endocarditis This new trend predominantly affects men who also have higher rates of HIV, hepatitis C and alcohol abuse, according to new research published in the Journal of the American Heart Association.

Infective endocarditis occurs when bacteria or fungi in the blood stream enter the heart's inner lining or valves. Nearly 34,000 people receive treatment for this condition each year, of which approximately 20% die. One of the major risk factors for infective endocarditis is drug abuse. 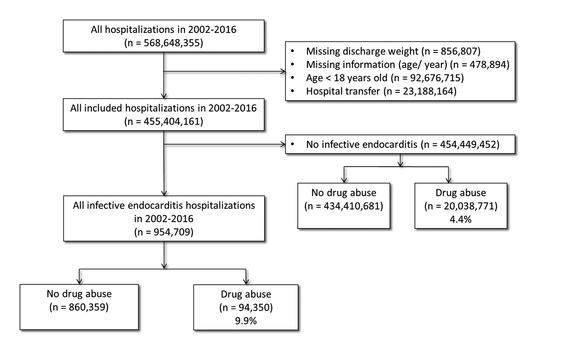 During the 14 years studied, researchers found that the prevalence ratio for drug-abuse-related heart infections nearly doubled in the United States, from 8% to 16%. All geographic regions saw increases, and the highest jump occurred in the Midwest at nearly 5% per year.

They also found those with infective endocarditis related to drug abuse:

Were poorer, with nearly 42% having a median household income in the lowest national quartile, and about 45% are covered by Medicaid;

Had higher rates of HIV, hepatitis C and alcohol abuse compared to patients with infective endocarditis who are not drug abusers;

Had longer hospital stays and higher health care costs; and

Were more likely to undergo heart surgery, yet less likely to die while hospitalized. Lower death rates are likely due to their significantly younger age.

Diseases that occurred more frequently among patients with heart infections from causes other than drug abuse included high blood pressure, diabetes, heart failure, kidney disease and lung disease. A study limitation is that the registry relies solely on diagnostic codes (ICD codes) and does not include hospital transfers. Another limitation is that the registry provided only general information by region, without details specific to states, cities and rural towns.
News Articles
More Articles All Articles
About