News Staff
Ice seems solid to the eye, but it is really a material that flows like a viscous liquid. In the polar ice sheets, it flows towards the oceans under its own weight. Knowing how fast the ice flows is of crucial importance to predict future sea level rises, especially if climate change occurs and impacts that.

For a new study, researchers used flow velocities at the surface of the northern Greenland Ice Sheet to create estimates and data from satellite images suggest that the polar ice is softer than scientists believed.

The flow has two components: the internal shearing flow that depends on the viscosity of the ice, and basal motion, which is the ice sheet sliding along the bedrock, especially when the ice melts at that base. From the surface velocities of the ice the researchers calculated the stresses that drive the flow.

Previous studies indicated that up to 50 percent of the Greenland Ice Sheet is melting at its base but the authors believe that is probably overestimated if previous studies assumed ice was harder than it actually is. The new estimate significantly reduces the area where basal motion,  and therefore basal melting, can be expected in the Greenland study area. 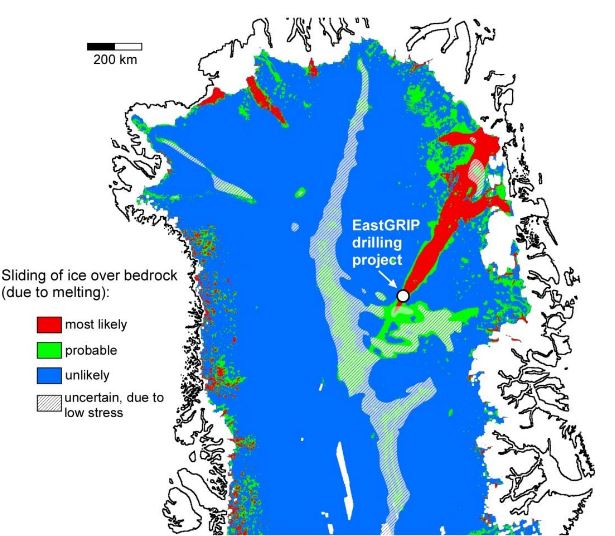 Map of the area investigated in northern Greenland. Until now it was assumed that melting at the bottom of the ice sheet and the resulting glide affected some 50 percent of the area. The new measurements indicate that a much smaller area of ice has been affected so far. Image: Paul D. Bons, Ilka Weikusat

Even if they are correct, that does not mean ice will now enter the oceans more slowly and delay sea-level rise. it may simplyy be that that the internal deformation of ice is more important than was thought before and future models will need to adopt if they hope to more accurately predict sea level changes.

The share of ice transport towards the oceans between melting at the base or internal shearing of the whole ice body has to be reconsidered, but cannot be determined from surface data alone. Instead, deep drill cores into fast flowing ice are more telling.