News Staff
At the very large and very small scale, Newtonian gravity does not work the way it should. The universe should not be expanding and forget trying to explain quantum mechanics.

Trying to detail why electrons can behave as both particles and waves, depending on the experimental context in which they are observed, is challenging. Louis de Broglie, Niels Bohr, Erwin Schrödinger, and David Bohm all tried but used self-consistent yet contradictory interpretations.

Einstein and Bohr's debates did not lead to conclusive results and the next generation of physicists opted for equations that derived from conflicting theoretical frameworks without worrying much about the underlying philosophical concepts. The equations “worked”, and that was apparently sufficient. Various technological artifacts that are now trivial were based on practical applications of quantum theory.

Sometimes you work with what is regardless of why it is.

But why is always going to be paramount to some and Polish physicist Wojciech Zurek used the term “Quantum Darwinism” for his belief that interaction between a physical system and its environment selects for certain kinds of behavior and rules out others, and that the kinds of behavior conserved by this “natural selection” are precisely those that correspond to the classical description.

Thus, for example, when someone reads this text, their eyes receive photons that interact with their computer or smartphone screen. Another person, from a different viewpoint, will receive different photons, but although the particles in the screen behave in their own strange ways, potentially producing images completely different from each other, interaction with the environment selects for only one kind of behavior and excludes the rest, so that the two readings end up accessing the same text. 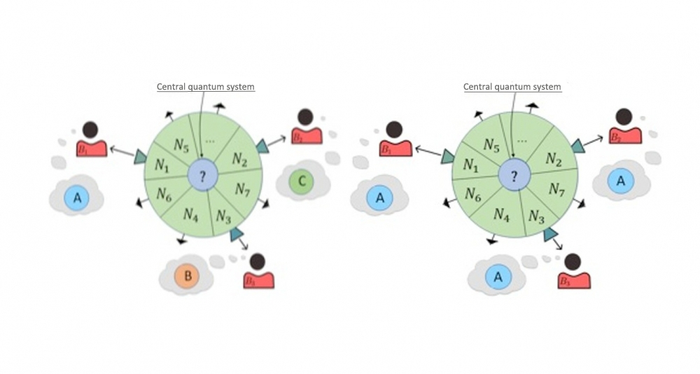 “This formalism enables us to produce mathematical descriptions of different physical theories, and hence to compare them. It also enables us to understand which theories obey certain physical principles. Quantum theory and classical theory are two examples of GPTs, but many others can also be described,” says co-author and Brazilian physicist Roberto Baldijão.

According to Baldijão, working with GPTs is convenient because it enables valid results to be obtained even if quantum theory has to be abandoned at some point. Furthermore, the framework provides for better apprehension of quantum formalism by comparing it with what it is not. For example, it can be used to derive quantum theory from simpler physical principles without assuming the theory from scratch. “Based on the formalism of GPTs, we can find out which principles permit the existence of ‘Darwinism’ without needing to resort to quantum theory,” he said.

The paradoxical result at which Baldijão arrived in his theoretical investigation was that classical theory only emerges via “natural selection” from theories with certain non-classical features if they involve “entanglement”.

“Surprisingly, the manifestation of classical behaviors via Darwinism depends on such a notably non-classical property as entanglement,” he said.

Entanglement, which is a key concept in quantum theory, occurs when particles are created or interact in such a way that the quantum state of each particle cannot be described independently of the others but depends on the entire set.

The most famous example of entanglement is the thought experiment known as EPR (Einstein-Podolsky-Rosen). A number of paragraphs are required to explain it. In a simplified version of the experiment, Bohm imagined a situation in which two electrons interact and are then separated by an arbitrarily large distance, such as the distance between Earth and the Moon. If the spin of one electron is measured, it can be spin up or spin down, with both having the same probability. Electron spins will always end up pointing either up or down after a measurement – never at some angle in between. However, because of the way they interact, the electrons must be paired, meaning that they spin and orbit in opposite directions, whatever the direction of measurement. Which of the two will be spin up or spin down is unknown, but the results will always be opposite owing to their entanglement.

The experiment was supposed to show that the formalism of quantum theory was incomplete because entanglement presupposed that information traveled between the two particles at infinite speed, which was impossible according to relativity theory. How could the distant particles “know” which way to spin in order to produce opposite results? The idea was that hidden variables were acting locally behind the quantum scene and that the classical worldview would be vindicated if these variables were considered by a more comprehensive theory.