All of those combined have caused a real dearth in development of new antibiotics - but as mandated lower costs for drugs internationally show, if the United States does not develop them, no one will because the costs are not worthwhile without America. It is no secret antiobiotic resistance is the norm, evolution continues to occur and bacteria outlasted the dinosaurs and will probably outlast us also.

Now the governments that caused a shortage of new development are in a panic about it. Just throwing more money at a crisis is not a solution, though money and regulations are the only tools governments provide. Nor is risking lives by limiting antibiotics. 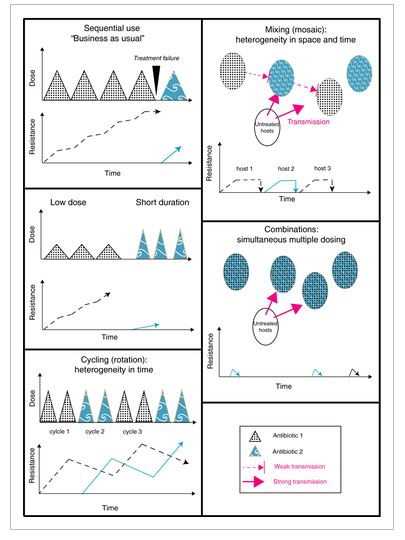 In a new paper, Dr. Ben Raymond of the University of Exeter of the Centre for Ecology and Conversation outlines five rules for "sustainable use" of antibiotics. These include acting to protect new drugs before resistance becomes a problem, using more diverse antimicrobials to reduce long-term use of single drugs, and using data to design management plans for particular superbugs.

1. Prevention of resistance.  Preventiong is not slathering children in antibacterial soaps, it is use of antibiotic “cycling” and “mixing” to slow natural selection in bacteria, which provides longer periods of time for new development to occur.

2. Don't rely on "fitness costs". Some plans depend on stopping use of a drug, in the hope that resistant bacteria suffer a "fitness cost" - dying out because they carry resistance genes that are no longer useful. This can work, but Dr Raymond warns that resistance to a drug does not necessarily go away just because use of that drug stops.

"Some humility in the face of natural selection can ensure that human creativity keeps pace with evolutionary innovation."
News Articles
More Articles All Articles
About