News Staff
A new paper has identified the risk factors for death from COVID-19, also called coronavirus and Wuhan flu, and they are much like any other flu; being older and having pre-existing conditions are the biggest concerns.

The results are observational from 191 patients and only from two hospitals in Wuhan, China, so caution is warranted when interpreting them even more than with other epidemiological correlation, but along with age showing signs of sepsis, chronic respiratory illness, and having blood clotting issues when admitted to hospital are unsurprisingly the key risk factors associated with the higher risk of death.

Also found was that old age, having a high Sequential Organ Failure Assessment (SOFA) score, and having d-dimer greater than 1 μg/L are the factors that could help clinicians to identify patients with poor prognosis at an early stage.

On average, patients were middle-aged (median age 56 years), most were men (62%, 119 patients), and around half had underlying chronic conditions (48%, 91 patients)—the most common being high blood pressure (30%,) and diabetes (19%). From illness onset, the median time to discharge was 22 days, and the average time to death was 18.5 days.

Compared with survivors, patients who died were more likely to be older (average age 69 years vs 52 years), and have a higher score on the Sequential Organ Failure Assessment (SOFA) indicating sepsis, and elevated blood levels of the d-dimer protein (a marker for coagulation) on admission to hospital.

Additionally, lower lymphocyte (a type of white blood cell) count, elevated levels of Interleukin 6 (IL-6, a biomarker for inflammation and chronic disease), and increased high-sensitivity troponin I concentrations (a marker of heart attack), were more common in severe COVID-19 illness.

Some in media have been misunderstanding the mortality of coronavirus because they use population level statistics without accounting for the fact that the people most likely to die from this are likely to die from anything, especially any flu. Sepsis is a killer. So in the study of 191 patients, 54 died in the hospital but that should not impact media claims about the severity of this across all levels. Use caution, as with any virus. 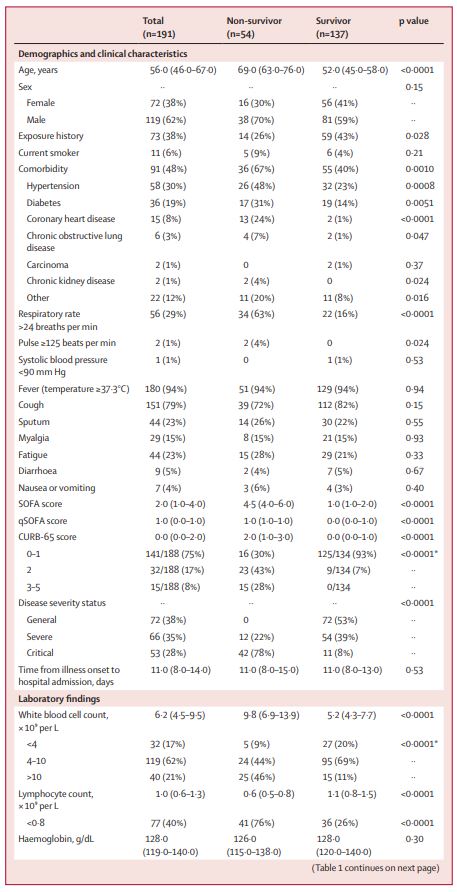 What is important is the data on viral shedding, which indicate that the median duration of viral shedding was 20 days in survivors (ranging from 8 to 37 days), and the virus was detectable until death in the 54 non-survivors.

While prolonged viral shedding suggests that patients may still be capable of spreading COVID-19, duration of viral shedding is influenced by disease severity, and all patients in the study were hospitalized, two-thirds of whom had severe or critical illness. Viral shedding was limited by the low frequency of respiratory specimen collection and the lack of measurable genetic material detection in samples.

"Poorer outcomes in older people may be due, in part, to the age-related weakening of the immune system and increased inflammation that could promote viral replication and more prolonged responses to inflammation, causing lasting damage to the heart, brain, and other organs," says co-author Dr Zhibo Liu from Jinyintan Hospital, China.
News Articles
More Articles All Articles
About