News Staff
We are at the top of the food chain, but some of our senses got short shrift when it came to other animals. Dogs can hear at frequencies we can't, mantis shrimp got 16 visual pigments and we are stuck with just 3.5, and don't even get other animals started on our pathetic sense of smell.

But a weak nose in humans is really just a 19th century myth that won't go away, like homeopathy and organic food, according to a new analysis. Instead of being limited to a paltry 10,000 odors, humans can discriminate maybe one trillion different ones, the same as dogs and rodents.
The faulty persistent claim is thanks to Paul Broca, a 19th century brain surgeon and anthropologist as the culprit for the falsehood that humans have an impoverished olfactory system. 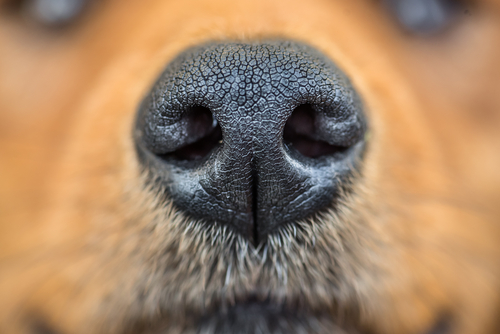 He was making the case for human dominance. In Broco's 1879 writings, he claimed that the smaller volume of the olfactory area, which sends signals to other areas of a very powerful human brain to help identify scents, compared to the rest of the brain meant that humans had free will and didn't have to rely on smell to survive and stay alive like dogs and other mammals.  The olfactory receptor neurons in the nose work by making physical contact with the molecules composing the odor, and they send this information back to that region of the brain. There is actually no evidence that a larger olfactory bulb increases sense of smell and the human olfactory bulb is quite large and similar in the number of neurons to other mammals.

So why did the myth persist? It got some help. The idea that humans don't have the same sense of smell abilities as animals flourished based on some genetic studies which discovered that rats and mice have genes for about 1000 different kinds of receptors that are activated by odors, compared to humans, who only have about 400. Confirmation bias says that more receptors must be better, the same way that your phone camera claiming to take 8 megapixel pictures might sound better than two - when in a camera it is the lens that makes the difference.

So who is really better at scents then?