Strontium Born From Neutron Star Collision Detected In Space - And What It Means
By News Staff | October 23rd 2019 10:00 AM | Print | E-mail

News Staff
ESO’s X-shooter spectrograph on the Very Large Telescope in Chile has detected a freshly made heavy element, strontium, in space, in the aftermath two merging neutron stars.

That sounds obscure but it means that the heavier elements in the Universe can form in neutron star mergers, a clue in the puzzle of chemical element formation.

Astronomers suspected that, if heavier elements did form in neutron star collisions, signatures of those elements could be detected in kilonovae, the explosive aftermaths of neutron star mergers, so they turned the VLT's X-shooter on the neutron star merger named GW170817. Located in the galaxy NGC 4993, the merger was the first, and so far the only, gravitational wave source to have its visible counterpart detected by telescopes on Earth.  They began monitoring the emerging kilonova explosion over a wide range of wavelengths and X-shooter took a series of spectra from the ultraviolet to the near infrared. Initial analysis of these spectra suggested the presence of heavy elements in the kilonova, but now astronomers have been able to pinpoint individual elements. 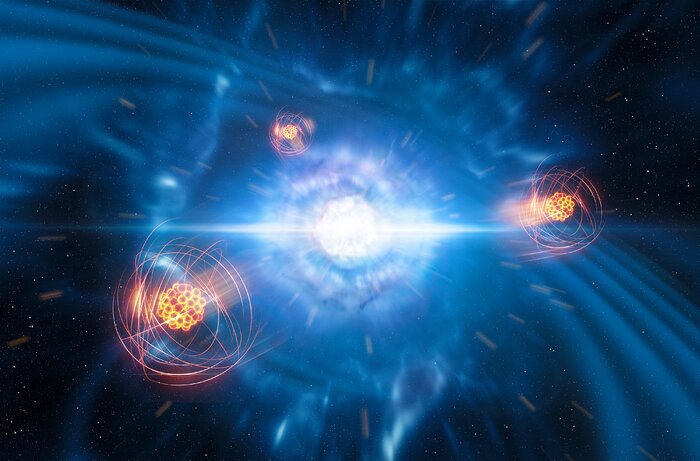 They have now identified the signature of one heavy element in this fireball, strontium, proving that the collision of neutron stars creates this element in the Universe. On Earth, strontium is found naturally in the soil and is concentrated in certain minerals. Its salts are used to give fireworks a brilliant red color.  Astronomers have known the physical processes that create the elements since the 1950s. Over the following decades they have uncovered the cosmic sites of each of these major nuclear forges, except one; rapid neutron capture, which created the heavier elements in the periodic table. 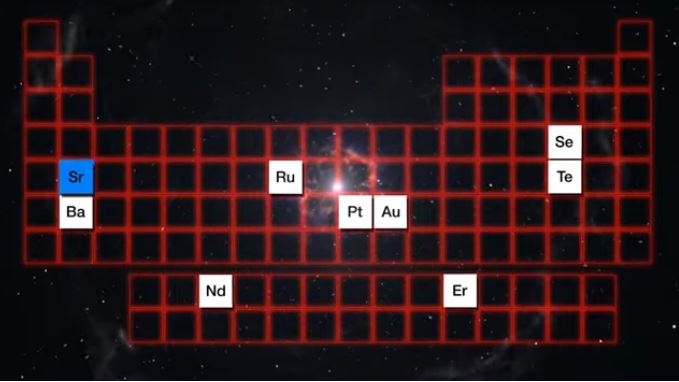 Rapid neutron capture is a process in which an atomic nucleus captures neutrons quickly enough to allow very heavy elements to be created. Although many elements are produced in the cores of stars, creating elements heavier than iron, such as strontium, requires even hotter environments with lots of free neutrons. Rapid neutron capture only occurs naturally in extreme environments where atoms are bombarded by vast numbers of neutrons.


A series of spectra of the kilonova in NGC 4993 observed by the X-shooter instrument on ESO's Very Large Telescope in Chile. They cover a period of 12 days after the initial explosion on 17 August 2017. The kilonova is very blue initially but then brightens in the red and fades.

Given activist objections to astronomy in Hawaii, even the University of Hawaii has stated it will no longer pursue projects in its own state due to manufactured outrage and vandalism, Chile will soon be the world leader in space science so look for more discoveries to come from South America.