The Genetic Link Between Neanderthals And Modern Africans And Europeans Is Stronger Than Ever
By News Staff | January 30th 2020 01:56 PM | Print | E-mail

News Staff
Neanderthal DNA sequences are more common in modern Africans than previously known, and different non-African populations have levels of Neanderthal ancestry surprisingly similar to each other, according to a new study in Cell. 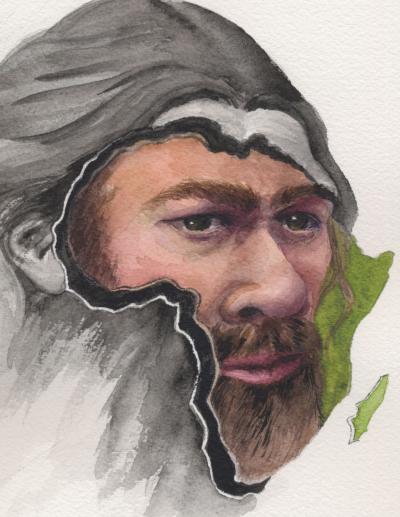 To address this problem, IBDmix was created as a new category of methods for detecting archaic ancestry. Instead of using a modern reference panel, the approach calculates the probability that an individual's genotype is shared identical by descent (IBD) with an archaic reference genome. Compared with S*, IBDmix is a less biased approach because it has higher statistical power for detecting shared archaic sequences and yields fewer false positives.

To explore potential explanations for the unexpectedly high Neanderthal ancestry in Africans, the researchers then compared the actual data to simulated genotype data derived from different demographic models. This analysis took into account various sequence characteristics, such as the length of the shared archaic segments, the frequency of these segments in Africans, and the amount of sequence shared exclusively between African and non-African populations.

They found that Africans exclusively share 7.2% of Neanderthal sequence with Europeans, compared with only 2% with East Asians. Simulations showed that low levels of back-migration persisting over the past 20,000 years can replicate features of the data and could therefore be a possible explanation for the observed levels of ancestry among different modern populations. The results suggest that previously developed methods using an African reference population are biased toward underestimating Neanderthal ancestry to a greater extent in Europeans compared to East Asians.

But gene flow went in both directions. The data also suggest that there was a dispersal of modern humans out of Africa approximately 200,000 years ago, and this group hybridized with Neanderthals, introducing modern human DNA into the genomes of Neanderthals. According to the authors, both out-of-Africa and into-Africa dispersals must be accounted for when interpreting global patterns of genomic variation.

Using IBDmix, the researchers also identified 51 high-frequency Neanderthal haplotypes--sets of DNA variations that tend to be inherited together--in modern humans, including several that were undetected with previously developed methods. For the first time, they detected high-frequency Neanderthal haplotypes in Africans, and regions containing these haplotypes are enriched for genes involved in immune function and ultraviolet-radiation sensitivity. These haplotypes may reflect instances of beneficial Neanderthal sequences being rapidly driven to high frequency in modern humans through a process known as adaptive introgression.

The authors note several limitations of their approach. Because IBDmix requires an archaic reference genome, it is not suitable for discovering sequences shared between modern humans and unknown or unsequenced hominin lineages. In addition, the approach requires sequenced genomes from at least ten individuals for robust inferences.
News Articles
More Articles All Articles
About