News Staff
In a 1972 book, "The Mountain People", Colin Turnbull deemed the the Ik ethnic group of hunter-gatherers in the Uganda mountains

There was a huge confounder in his work that scientists would've noted immediately and now fellow anthropologists have caught; since the observations were done during a severe famine in the mid-1960s, they did not uncover typical behavior of the Ik. Instead, sharing and cooperating re-emerged once resources were plentiful enough.

Turnbull did his fieldwork between 1964 and 1967 and due to his conclusions he advocated that the group be rounded up forcibly regardless of age and gender and taken to remote parts of Uganda to stamp out culture traits. Other anthropologists, such as Margaret Mead, lauded his work. His depiction of the Ik attracted attention from such publications as TIME Magazine and The New York Times. It even inspired a play by Royal Shakespeare Company. 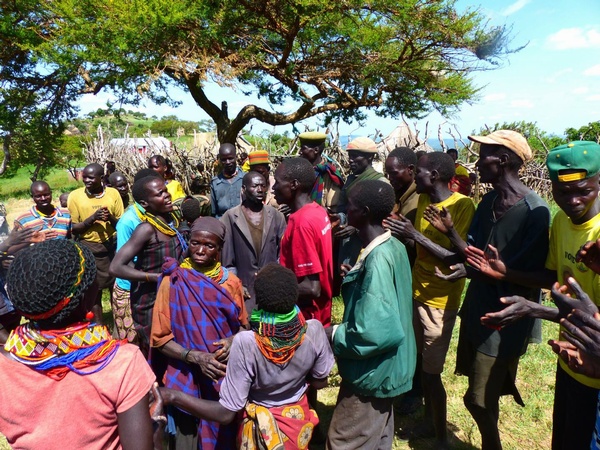 The Ik society of Uganda, labeled half a century ago as selfish, actually has a culture that encourages sharing with the needy, new study finds. Photo: Cathryn Townsend

Baylor anthropologist Dr. Cathryn Townsend, who co-authored a new criticism in Evolutionary Human Sciences, said, "The Ik have been misrepresented by outsiders who gave far too much credence to Turnbull's flawed research. The Ik people have not yet themselves had much of a chance to talk back to correct this misrepresentation of their culture, but our research shows that associating the Ik with selfishness is a myth and that it is simply wrong.

"Ik culture includes traits that encourage sharing with those in need and a belief in supernatural punishment of selfishness. The findings confirm the consensus among scholars that humans are remarkably cooperative."

The Ik, who live in villages ranging from 50 to 250 people, believe that the landscape is inhabited by spirits with shadowy human forms. Their religion also incorporates Christianity and the idea of a creator or supreme god. They believe nature spirits bring misfortune to those who fail to share and reward those who are generous.

In the study, Townsend used an instrument commonly used in the human sciences to assess generosity. It includes a theoretical framework in which a person receives money and the opportunity to share some, none or all with an anonymous person in their community.

About 120 Ik individuals were divided into four groups and asked whether they would be willing to share a typical day's wages of 2,000 Ugandan shillings (equal to about 50 cents in the United States).

The scenarios, with varying details about needs and religious beliefs, included:

What do you know of Earth spirits? Do they cause trouble for people who do not share? Do they bring good fortune to those who do? You will be given 2,000 shillings to decide how to share between yourself and a community member in need. For example, that person may be old and hungry. You will not find out who this person is, and they will not find out who you are
.

Results showed participants were most likely to be more generous in the scenario that included both a needy recipient and supernatural punishment, as compared with the first scenario. The responses in Scenarios 2 and 3 also were more generous.

"People behaved, on average, very slightly more generously in Scenario 3 -- which referred to supernatural punishment -- than they did in Scenario 2, but the difference is negligible," Townsend said.

In the study, Townsend also observed the people's day-to-day sharing and asked what sharing meant to them. Sharing is based on need and ties of friendship, kinship or clan, but interviewees also talked about the importance of cultivating sharing. Said one man: "If you keep everything in your granary to yourself, you will still run out of food during the hunger season, and then you will suffer because no one will share with you."

In one case, the Ik even accepted a widow and infant who were refugees from a nearby and often hostile group. In Townsend's interviews with 60 respondents, more than three fourths said Earth spirits caused trouble for people who do not share; nearly half said the spirits bring good fortune to those who do. In a second analysis, researchers compared the Ik's sharing with generosity assessments of more than 20,000 participants, mostly in Western countries. They found the people's behavior similar to that of other societies.

"While the selfish behavior observed by Turnbull may have been at least partly real, we can conclude that this was due to a severe famine at the time in which people were starving to death, not culture," Townsend said. "The Ik people have experienced many extreme hardships since the famine that Turnbull witnessed in the 1960s, but the resilience of Ik culture traits of generosity should give us all hope that human cooperation ultimately overcomes adversity."
News Articles
More Articles All Articles
About