The Pancreas Has Little Exposure To Sex Hormones So Why Do Women Get One Form Of Its Cancer?
By News Staff | August 6th 2019 08:02 AM | Print | E-mail

Though the pancreas is an organ with little exposure to sex hormones, one form of pancreatic cancer affects specifically women, often young.

How is this possible, even though the pancreas ? This pancreatic cancer, known as "mucinous cyst", has strange similarities with another mucinous cancer, affecting the ovaries.

A new paper has a plausible answer. Both tumors originate from embryonic germ cells. While still undifferentiated, these cells migrate to the reproductive organs. On their way, some can mistakenly stop in other organs, bringing a risk of tumor that may occur 30 years later.

Mucinous tumors of the ovary and pancreas affect young women - between 30 and 40 years of age. They take the form of a large cyst, a kind of ball filled with liquid. Rare - they account for about 3 percent of ovarian and pancreatic cancers - they are usually treated by surgery. Taken in time, the cancerous cyst is completely removed. However, in 15 percent of cases, the cyst breaks before surgery; the cancer cells spread into the peritoneum, giving rise to metastases that are highly resistant to chemotherapy. In such cases, the survival prognosis of patients does not exceed one year. 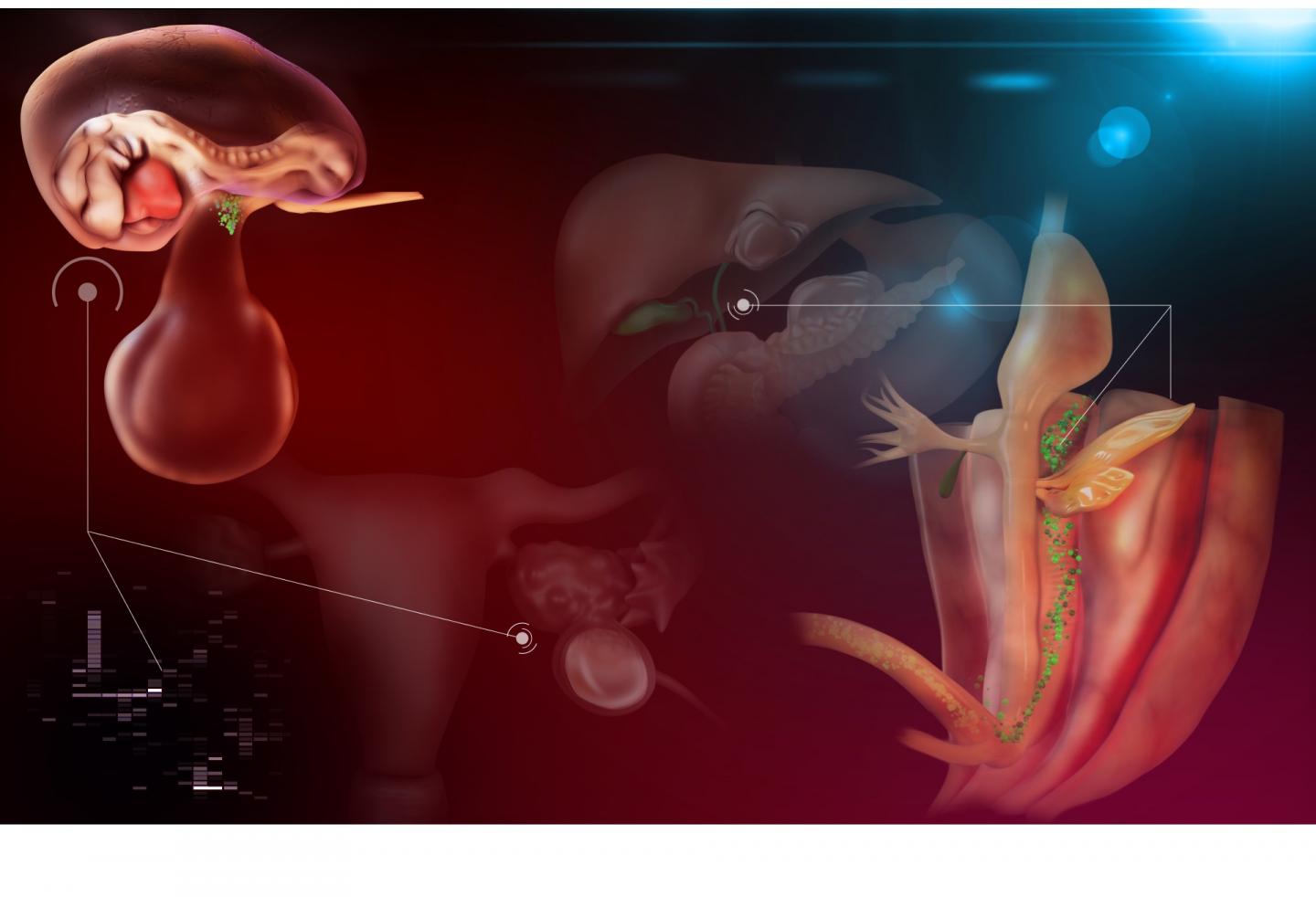 Why is a non-gynaecological cancer almost exclusively female? What is the link between the ovary and the pancreas? "It is only during embryogenesis that these organs are really close. At the very beginning of pregnancy, the embryo possesses primordial germ cells - in a way, precursors of gametes, oocytes or spermatozoa - which, between 4 and 6 weeks of pregnancy, makes a long migration in the human body. They pass behind the future pancreas and arrive in the outline of the gonads, around the 7th week of pregnancy. Most likely, some of these germ cells stop on the way," says study leader Dr. Intidhar Labidi-Galy, a researcher at Université de Genève.

Using public databases, the authors developed a transcriptomic profile - which identifies gene expression levels in a tissue - of primordial germ cells at 6, 7, 11, 16 and 17 weeks of pregnancy, as well as of tumoral and healthy ovarian and pancreatic cells.

The researchers then compared these data, on one hand with the pancreas and on the other hand with the ovary, by studying for each of these two organs the profile of healthy tissues, mucinous tumors and other types of tumors. Their results are clear: in both cases, the transcriptomic profile of the mucinous tumor is far away from the supposed tissue of origin (ovary or pancreas), but very close to the primordial germ cells. This proves that these tumors are closer to the primordial germ cells than to the organ in which they developed.

These results indicate that a stop in cell migration that occurred accidentally during the embryonic life of these women may, decades later, be expressed as cancer, depending on their other risk factors (e.g. smoking) and where in the body these primordial germ cells have settled. Indeed, while the scientists have examined the pancreas and ovary, similar cases have been reported everywhere on the migration line of germ cells, particularly in the liver or peritoneum.

"Our results will not change the surgical management of these patients, but may lead us to reflect on chemotherapy protocols. These rare tumours are a bit like the orphan diseases of cancers, for which there are no standard treatments. By linking them to other cancers, we hope to identify treatments that would be effective. For each mutation, what is the best treatment? We are here at the heart of personalized oncology: knowing your enemy in every detail makes it easier to fight him," concludes Dr. Labidi-Galy.