News Staff
For the last 10,000 years the earth has been in a warming cycle. The latest ice age ended around that time, a recurring phenomenon in nature where 90,000 of every 100,000 years were ice ages.

How warm has it gotten compared to other warming bursts since the last ice age ended? A lot. Maps of global temperature changes for every 200-year interval going back 24,000 years finds that the magnitude and rate warming over the last 150 years far surpasses the magnitude and rate of changes over the rest of the period - including when we were leaving an ice age. 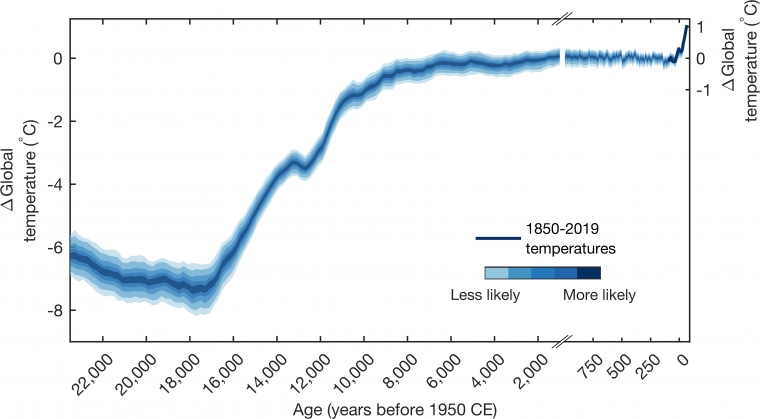 Global average surface temperature since the last ice age 24,000 years ago. Time is stretched for the past 1000 years to visualize recent changes. Credit: Matthew Osman

Using modern approaches, there is no need to 'hide the decline' or try and explain cobbled together curves from data sets that may be unreliable, it shows a general warming trend over the last 10,000 years, settling a decade-long debate about whether this period trended warmer or cooler.

The team combined two independent datasets – temperature data from marine sediments and computer simulations of climate – to create a more complete picture of the past. The researchers looked at the chemical signatures of marine sediments to get information about past temperatures. Because temperature changes over time can affect the chemistry of a long-dead animal's shell, paleoclimatologists can use those measurements to estimate temperature in an area. It's not a perfect thermometer, but it's a starting point. Computer-simulated climate models, on the other hand, provide temperature information based on estimates about the physics of the climate system, and models are usually only believed by the modeler. So the team decided to combine the methods to harness the strengths of each.

This data assimilation is commonly used in weather forecasting but it's obviously easier to calibrate predictions against the past than hope they predict the future. "To forecast the weather, meteorologists start with a model that reflects current weather, then add in observations such as temperature, pressure, humidity, wind direction and so on to create an updated forecast," said co-author and University of Arizona Professor Jessica Tierney.

"With this method, we are able to leverage the relative merits of each of these unique datasets to generate observationally constrained, dynamically consistent and spatially complete reconstructions of past climate change," said lead Dr. Matthew Osman, also of the University of Arizona.
News Articles
More Articles All Articles
About