News Staff
To clear blood clots in the brain, doctors often perform an endovascular procedure, where a surgeon inserts a thin wire through a patient’s main artery, usually in the leg or groin. Guided by a fluoroscope that simultaneously images the blood vessels using X-rays, the surgeon then manually rotates the wire up into the damaged brain vessel.

A catheter can then be threaded up along the wire to deliver drugs or clot-retrieval devices to the affected region.

Soon, a snake may be able to do it without the exhausting manual effort by a surgeon.

Stroke is a top five cause of death and disability in the U.S. so MIT engineers have developed a magnetically steerable, thread-like robot that can actively glide through narrow, winding pathways, such as the labrynthine vasculature of the brain - and hopefully speed up treatment time. If acute stroke can be treated within the first 90 minutes or so, patients’ survival rates increase significantly. 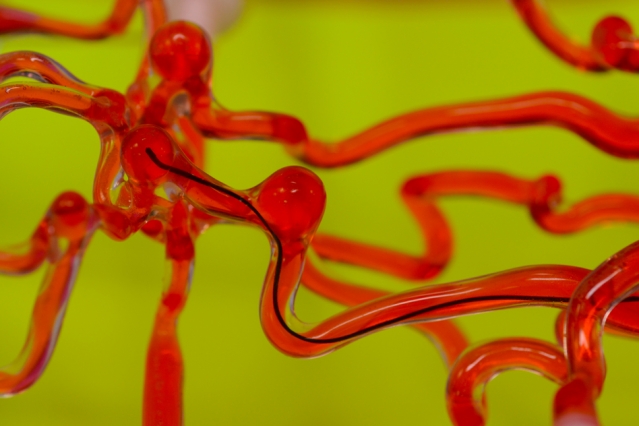 Image courtesy of the researchers

In their paper, the researchers combined their work in hydrogels and in magnetic actuation, to produce a magnetically steerable, hydrogel-coated robotic thread, or guidewire, which they were able to make thin enough to magnetically guide through a life-size silicone replica of the brain’s blood vessels. If that sounds like a snake, it is. But a robotic one.

The core of the robotic thread is made from nickel-titanium alloy, or “nitinol,” a material that is both bendy and springy. Unlike a clothes hanger, which would retain its shape when bent, a nitinol wire would return to its original shape, giving it more flexibility in winding through tight, tortuous vessels. The team coated the wire’s core in a rubbery paste, or ink, which they embedded throughout with magnetic particles.

Finally, they used a chemical process they developed previously, to coat and bond the magnetic covering with hydrogel — a material that does not affect the responsiveness of the underlying magnetic particles and yet provides the wire with a smooth, friction-free, biocompatible surface.

They demonstrated the robotic thread’s precision and activation by using a large magnet, much like the strings of a marionette, to steer the thread through an obstacle course of small rings, reminiscent of a thread working its way through the eye of a needle.

The researchers also tested the thread in a life-size silicone replica of the brain’s major blood vessels, including clots and aneurysms, modeled after the CT scans of an actual patient’s brain. The team filled the silicone vessels with a liquid simulating the viscosity of blood, then manually manipulated a large magnet around the model to steer the robot through the vessels’ winding, narrow paths.