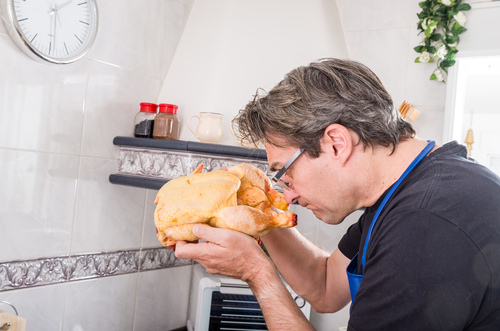 But they are woefully lacking information about a vital thing - food safety. An analysis of 1,497 recipes from 29 cookbooks that appeared on the New York Times best sellers list for food and diet books, all of which included handling raw animal ingredients, such as meat, poultry, seafood or eggs, didn't note food safety much at all.

* Did the recipe tell readers to cook the dish to a specific internal temperature?

* If it did include a temperature, is that temperature one that has been shown to be “safe”? For example, cooking chicken to 165°F.

* Does the recipe perpetuate food-safety myths – such as saying to cook poultry until the juices “run clear” – that have been proven unreliable as ways of determining if the dish has reached a safe temperature?

The researchers found that only 123 recipes – 8 percent of those reviewed – mentioned cooking the dish to a specific temperature. And not all of the temperatures listed were high enough to reduce the risk of foodborne illness.

In addition, 99.7 percent of recipes gave readers “subjective indicators” to determine when a dish was done cooking. And none of those indicators were reliable ways to tell if a dish was cooked to a safe temperature.

"The most common indicator was cooking time, which appeared in 44 percent of the recipes,” says Katrina Levine, lead author of the paper and an extension associate in NC State’s Department of Agricultural and Human Sciences. “And cooking time is particularly unreliable, because so many factors can affect how long it takes to cook something: the size of the dish being cooked, how cold it was before going into the oven, differences in cooking equipment, and so on.”

Other common indicators used in the cookbooks included references to the color or texture of the meat, as well as vague language such as “cook until done.”

“This is important because cooking meat, poultry, seafood and eggs to a safe internal temperature kills off pathogens that cause foodborne illness,” Levine says. “These temperatures were established based on extensive research, targeting the most likely pathogens found in each food.”

A list of safe cooking temperatures can be found at https://www.foodsafety.gov/keep/charts/mintemp.html.

“Ideally, cookbooks can help us make food tasty and reduce our risk of getting sick, so we’d like to see recipes include good endpoint cooking temperatures,” Chapman says. “A similar study was done 25 years ago and found similar results – so nothing has changed in the past quarter century. But by talking about these new results, we’re hoping to encourage that change.”