The reason is simple; small-seeded vegetable crops struggle to emerge through thick cover crop residues. A recent program sought to see how it might work better with string beans, a common staple of many dinners, and possessing larger seeds. In both Illinois and Washington, USDA-ARS agronomist Rick Boydston and University of Illinois ecologist Marty Williams grew vetch, rye, and a combination of the two cover crops before killing them with a roller-crimper—a machine that evenly flattens and crimps standing plant biomass—or with a combination of the roller-crimper and a burndown herbicide.

The researchers tracked cover crop mortality, weed biomass, and snap bean yields during the experiment. Unfortunately, the roller-crimper did not effectively kill the vetch, even with an application of herbicide. Instead, vetch became weedy and caused yield losses in snap bean. Rye was easier to kill, but heavy plant residues complicated planting. 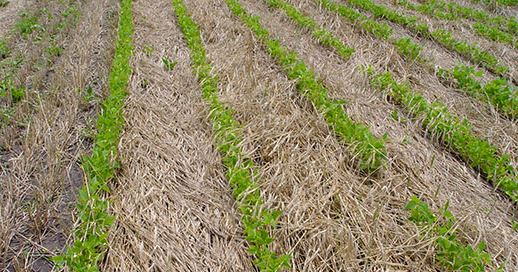 “There’s interest in both cover crops and no-till vegetable production, but adoption has been slow,” says Williams. They found that timing of roller-crimping is important. In general, he said, grass cover crops like rye need to be fully flowering when roller-crimped, or else the cover crop may not die. Vetch needs to be rolled a bit later, after pod development. A problem encountered with the cover crop mixture in this study was that rye reached the correct growth stage for roller-crimping before vetch.

“Another issue was adequate seed-to-soil contact, which can become a challenge with excessive plant residues on the soil surface. Closing the seed furrow becomes difficult with increasing soil moisture, which isn’t uncommon in central Illinois soils, especially during typical spring rainfall events, or with moderate to high levels of surface residues,” Williams says.

None of the cover crops or control methods offered any consistent yield advantages for snap bean. Instead, the greatest yields occurred in bare-soil treatments.