A new study takes Norwegians to task for continuing to use wood stoves as part of their bucolic northern heritage. Drive outside cities and it is common to see stacks of wood lining the walls of houses and smoke rising from the chimneys, especially on cold days. Due to that heritage, there was even a national "wood night program" on NRK, the Norwegian Broadcasting Corporation, which ran for 12 hours and attracted international attention.

But they are ruining the planet, argues a paper in Scientific Reports. They cite figures from Statistics Norway (SSB) which say 1.2 million Norwegian households heat with wood. They burned 1.1 million tons of firewood in 2016, which provided 5.34 TWh of direct heat.

First, to urban people that sounds like a lot. But 1.1 million tons of firewood for 1.2 million people means less than one ton per person. And we are talking about firewood, which became used because it is energy dense. It is heavy. A cord of wood weights 2 tons, and a cord of wood is "a loosely stacked pile of split firewood measuring 4 ft. wide x 4 ft. high x 8 ft. long." 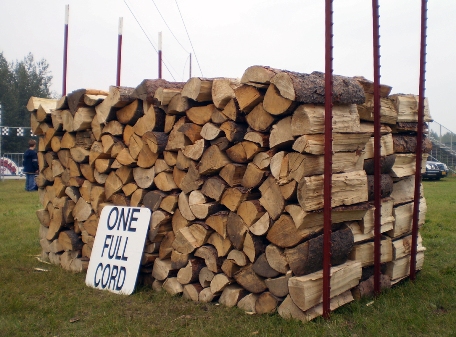 Do you really think Norwegians are heating their homes for the year with half of one of these? Or that it is causing pollution? Link: SHFTblog.

In a Norwegian winter, if wood were the sole heating source, they'd be using 30 cords, instead they are using a half of a cord. Norwegians are not burning up the planet.

Here is the evidence: the US Environmental Protection Agency has moved from actual pollution that harms people (PM10) to worrying about small micron particulate matter (PM2.5) which has never killed anyone. So even the tiniest controversial pollution has Norway looking like this:

Anders Arvesen, a researcher in the Industrial Ecology Programme at the Norwegian University of Science and Technology (NTNU), and Francesco Cherubin, are making "the perfect the enemy of the good" and engaging in baffling logic.

"Our findings show a complex picture. This form of heating has a significant warming effect on the climate, which is cause for concern. But at the same time, burning wood also causes significant cooling, which is encouraging," said  Arvesen in their statement.

They're not wrong. The 35 members of the OECD decided in 1991 that CO2 emissions from biomass combustion would not count in CO2 emission accounting. The theory was that nature would reabsorb the carbon dioxide released by burning, yielding a net balance of zero. Forests are renewable. Even logging helps. Though there are emissions from heavy logging machinery, the logged areas themselves have a cooling effect, because open areas reflect more of the incoming sunlight back into the atmosphere than wooded areas.

Still, the authors focus on "soot" even though that is only a minor problem in Norway, especially if each wood burning home uses less than a cord per year. Norwegians have modern, efficient wood stoves. The real issue is in the developing world. As Hank Campbell of the American Council on Science and Health writes in Priorities magazine, and we refuse to solve it because rich countries are insisting they use solar: "Decentralized energy for heating and cooking in homes account for most ambient air pollution in the developing world. Affordable centralized power, which coal is, makes it possible to improve their air quality, and it allows for modern water supply and sewage systems, which improve public health."

In poor countries, wood stoves are the norm and as you can see by the map, that does have a lot of pollution. But the American government has refused to participate in World Bank programs funding centralized energy - if it is coal. But even centralized coal, especially more modern clean coal facilities, bring far less pollution than decentralized wood.

However, the political war on coal has caused prices to fluctuate so much companies are unwilling to invest in new technologies to make coal even cleaner or more affordable for poor countries. Yet solar simply does not work, even after $100 billion in taxpayer subsidies it is 1% of energy. As the western world focuses on sustainability, we have lost sight of the real goal - making lives better. All we see is a half cord of wood burned per year in Norway and we think ending that would improve the air.