News Staff
If you survey educators and students, current or former, many will claim they have a learning style -  such as visual, auditory or tactile - that they were born with, and some say it predicts both academic and career success.

There is no scientific evidence to support this common myth, according to new researc, but   surveys in the United States and other industrialized countries across the world have shown that 80% to 95% of people believe in learning styles. It's difficult to say how that myth became so widespread. 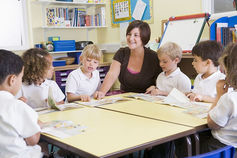 Psychological essentialism is the belief that certain categories of people have a true nature that is biologically based and highly predictive of many factors in their lives. People with essentialist opinions about learning styles may be more resistant to changing their strongly held views even when they learn that numerous studies have debunked the concept of learning styles.

In their responses to survey questions, the essentialist group members were more likely to state that learning styles are heritable, instantiated in the brain, don't change with age, mark distinct kinds of people, and predict both academic and career success. The non-essentialist group held looser beliefs about learning styles, viewing them as malleable, overlapping and more determined by environmental factors.

The first experiment included participants from the general U.S. workforce, including educators. The second experiment was weighted so that at least half of the participants were educators to provide a better understanding of their views. The small percentage of participants who didn't believe in learning styles weren't included in the analysis because the study was examining differing beliefs about learning styles. Demographic factors such as race, gender, parental status and income level didn't affect people's views on learning styles in the study, but educators of young children were more likely to have essentialist beliefs.

Previous research has shown that the learning styles model can undermine education in many ways. Educators spend time and money tailoring lessons to certain learning styles for different students even though all students would benefit from learning through various methods. Students study in ways that match their perceived learning style even though it won't help them succeed. Some teacher certification programs incorporate learning styles into their courses, which perpetuates the myth for the next generation of teachers. Academic support centers and a plethora of products also are focused on learning styles, despite the lack of scientific evidence supporting them.