News Staff
It is believed by some that zebras have black and white stripes as a defense mechanism against flies. To others, that seems too complex. In an Occam's Razor evolutionary universe it only leads to more speculation - why would they evolve such a sophisticated defense mechanism when it doesn't help, and flies are no less attracted to zebras than they are horses? Are zebras more prone to infectious diseases carried by African biting flies?  Or is the whole premise more like evolutionary psychology than science, where there is speculation neckties evolved so men would look like superior mates?

There are no answers for that any time soon but a new a study finds that regardless of why zebra stripes evolved, they seem to disrupt a biting fly’s ability to land on. The researchers conducted a series of experiments on a horse farm in England to better understand if stripes manipulate the behavior of biting flies as they attempt to come in to land on zebras.

It has been well documented that flies are just as attracted to zebras as they are horses, indicating that stripes do not deter flies at a distance, but the experiments concluded that once the flies got closer they were more inclined to bump into them or fly past. The authors believe this means stripes may disrupt a fly's ability for a controlled landing. 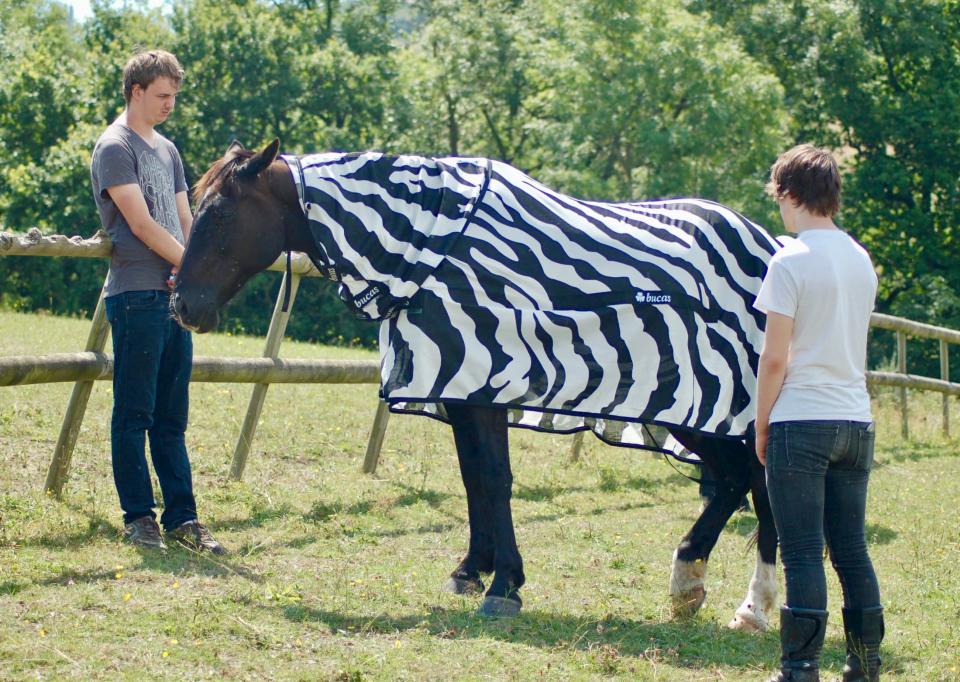 Joren Bruggink of Aeres University of Applied Sciences, at left, and Jai Lake of the University of Bristol investigate how horseflies behave around horses wearing different colored coats. This was part of an experiment led by UC Davis, focused on why zebra stripes are so good at warding off biting flies. Photo: Tim Caro/UC Davis

You may be skeptical. To a fly, a zebra landing strip is the relative size of a 10,000 foot long Air Force runway. The authors speculate something about stripes may confuse the lower resolution eyes of flies and that persists long after approach.

Horses did not evolve stripes, they simply swish their tails almost continuously during the day to keep flies off. They don't run if the flies are persistent, the way zebras do. So flies that contacted zebras were soon dislodged compared to horses. The running may be a more scientific evolutionary response than elaborate formation of stripes.
News Articles
More Articles All Articles
About