Josh Bloom
In case you are fooled by the title, and are expecting to learn about a retro-metal group with a really terrible name, I apologize in advance. That's not what this is about.

At some point during the rancorous comment section that followed my last piece about Dr. Oz,  I promised I wouldn't be writing about him anymore. I lied. Unfortunately, these days there is little downside to doing this. At worst, it will make me slightly more likely to hold an elected office in New Jersey.

"Lied" may not be accurate anyhow—more like I lacked the essential internal control mechanisms to enable me to keep my word. What few mechanisms I had collapsed like a bundt cake in a laundromat dryer when I read an article in the December 17th British Medical Journal. where a group of unfortunate individuals found themselves in the unenviable position of having to actually watch 40 episodes of the Dr. Oz Show, and determine how much of his advice is medically sound.

At this point I morphed into something resembling Roseanne Barr sitting across a table from a pastrami sandwich—unable to control myself.

And who could blame me? What Dr. Christina Korownyk, associate professor of family medicine at the University of Alberta, and colleagues found was so horrifying that I would feel like I would be committing heresy if I didn't jump into the scrum that is already giving the good doctor some very unwanted feedback.

The nationally syndicated show, which is viewed by about 3 million people in the US alone, has never been confused with grand rounds at Harvard Medical School, but how bad could it really be?
The answer is: Worse than you thought.

Dr. Korownyk's group found that of the roughly 80 recommendations made by Oz over the course of the 40 shows in question, medical evidence supported only 46 percent of them. Which somehow triggered the following image in my mind:

If this doesn't seem all that great, hang on—it gets worse. Fifteen percent of the time, Oz's recommendations actually contradicted medical evidence, and 39 percent of the time there was no evidence found to either refute or support his claims. And I thought the Yankees were bad.


Yet, millions of people are getting their medical advice from this show, and no doubt, millions more are getting it indirectly from friends, the Internet, and maybe their toasters.


The paper is full of details about how the shows and issues were chosen, including factors such as the time allotted to research per recommendation (one hour) and which expert opinions to consider. They sure did their homework, as evidenced by the protocol flow chart below: 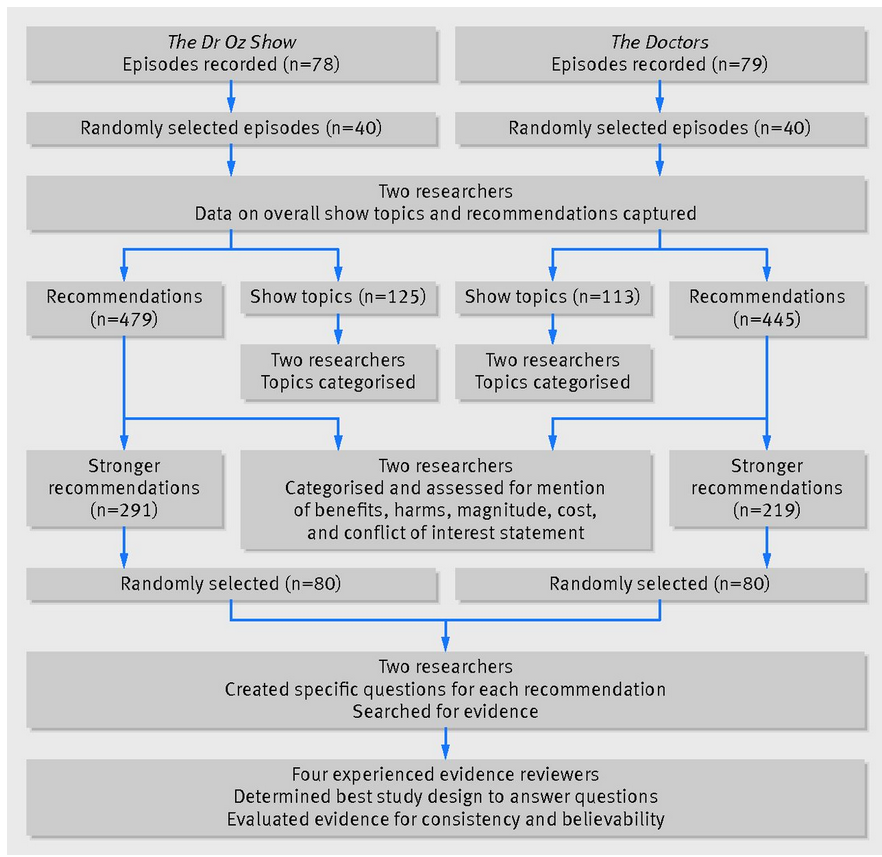 If you find yourself actually reading and trying to understand this, I suggest you seek help. Immediately.

Anyhow, I prefer my own simplified flow chart: 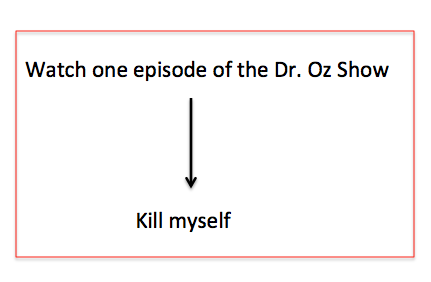 For the rest of this, let's let the authors do the talking:
-"Roughly a third of the recommendations on The Dr Oz Show... [was] based on believable or somewhat believable evidence."

-" We found believable or somewhat believable evidence against 11%... of the recommendations on the The Dr Oz Show."

-"Dietary recommendations on The Dr Oz Show were close to eight times more common (39% v 5%) than exercise recommendations." (Note- Do you think there is any chance that this might have a teensy bit to do with the fact that the show could rather easily pose for a weight loss supplement infomercial shown at 2:30 AM in Boogertown, NC?)

-"Decisions around healthcare issues are often challenging and require much more than non-specific recommendations based on little or no evidence from media health professionals."
OK. So despite some well known problems, we have what is arguably the best medical care in the world. Yet people watch (and believe) this crap, which is really quite pathetic when you think about it. Why, you would never see people taking medical advice from, say, Jenny McCarthy or Suzanne Somers, right? No one is that stupid.

Writing this article caused me enough stress that I was forced to eat an entire package of Entenmann's chocolate frosted donuts. Good thing that I can swallow a magical fat burner, so that when my lazy ass is in bed until noon I'll just get rid of those calories, while a bunch of ignoramuses struggle futilely in the gym.


Pfired but still kicking
More Articles All Articles
About