The Harlem Globetrotters had very little to worry about. After all, they had won 2,499 straight exhibition games against their foils, the Washington Generals. What could possibly go wrong?

Well, on January 5, 1971, the team's owner and player, 50-year old Red Klotz must have been in a pissy mood. Klotz scored with 10 seconds left to give the Generals a 100-99 lead. Then, Globetrotters star Meadowlark Lemon took his patented (and uncontested) half-court hook shot (watch it on YouTube!)—something he could do in his sleep—and missed, giving the Generals their first win against the Globetrotters since 1957.

It would not be grossly unfair to state that the Environmental Working Group (EWG)—henceforth known as the Environmental Washington Generals (EWG, clever, huh?)— is also in the middle of a 14-year losing streak when it comes to getting anything scientifically correct. With no end in sight. 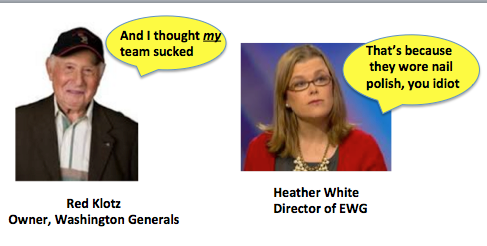 Instead, EWG has to rely on Executive Director Heather White to get its message out. So, in a sense, Ms. White, who seems to be wrong about virtually everything she says, can be seen as the general manager of the Washington Generals of science.

The group's science losing streak continued last week, when they fired up another, idiotic scare about a "new" chemical —their words, not mine—called triphenyl phosphate (TPHP), an almost supernaturally-safe component of nail polish.

And, who can blame them? After generating phony chemical scares about chemicals such as BPA and phthalates for an eternity, it was past time to toss out something new to scare the crap out of people, who will then donate generously to EGW to protect them from this hideous toxin.  The chemical in question may be new, but the game is the same, as is the group's strategy:

How deadly is TPHP? The CDC has plenty of data on it. Let's take a look:


Summary: It is impossible to eat or breathe enough of triphenyl phosphate to harm yourself, but the Environmental Washington Generals still want you to be scared because a tiny amount in it is found in nail polish. Really, they do.

In a typical phony scare piece for Ms. Magazine called “Your Nail Polish Could Be Disrupting Your Hormone System,” Ms. White claimed that the chemical would screw with your kids' sexual development.

Endocrine disruptors? Again??? Can’t they come up with something different?

Ms.White (predictably) fills the page with plenty of personal anecdotes to deflect the lack of data:

“I cringed but simultaneously rejoiced."

I think they prescribe lithium for that.

"I had officially become “that mom”—the one whose kid passed on nail polish because it might be toxic."

Wait til the kid sees a mouse.

"... [TPHP] got into the bodies of all 26 women who volunteered to paint their nails for the study. The evidence showed up in their urine within half a day.”

What is wrong with that last sentence? This is how our body is supposed to work. Drugs, chemicals, etc. are typically metabolized in the liver to give water-soluble metabolites that are excreted in the urine. I’d be more concerned if it didn’t show up in urine; that would indicate that it might be accumulating in our bodies, which doesn’t necessarily mean that it’s a problem, but it would at least be worth mentioning. Instead, she treated their audience to the biological equivalent of "I dropped a rock and gravity worked."

The lack of biological acumen aside, White’s articles failed to do what chemical scare groups like EWG always fail to do – mention the most important parameter in determining toxicity: dose. Even a seriously dangerous chemical will be harmless in minuscule doses. Think: Botox. And a safe one like TPHP… forget it.

“Scientists suspect that the chemical at issue—triphenyl phosphate, or TPHP—disrupts the hormone system….The last thing girls need in their bodies as they are developing rapidly is something that may play havoc with their hormones.”

It’s difficult to find a chemical that EWG doesn’t claim will disrupt hormones. Everything is an “endocrine disruptor.” I take that back. I have uncover their scientific positions on endocrine disruption by milk, Kryptonite, sousaphones, placebos, nose hair, or bocce balls. 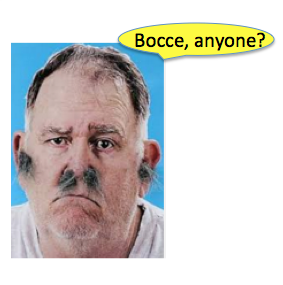 “But our list [of deadly nail polishes] won’t be complete until cosmetic companies verify their ingredients. As the Duke-EWG study showed, more polishes could contain TPHP and fail to disclose it.”

Well, if this doesn't put Watergate to shame...

“The conclusion is inescapable: any girl who paints her nails stands a chance of coming into contact with a potential hormone disruptor.”

Or a sabre-toothed tiger.

Except that one was real. Salon workers are constantly exposed to vapors of chemicals that are actually toxic. That has nothing to do with this whatsoever. Nice try, though.

"For now, I’ll keep hoping my daughter makes healthy choices as she moves from ‘tween to teen. And I’ll hold my breath until the next EWG report.”

Hopefully longer than that.

'Who knows what chemicals are lurking in the stickers she put on her nails?'

OK, this puts us is smack in the middle of Crazyland. If the Executive Director of EWG is telling that she is afraid of a chemical that glues a little star to her daughter's nails, may I suggest another chemical?: 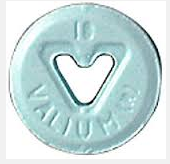 So, I'm wondering if readers of Ms. Magazine (you know who you are, both of you), shouldn't be a little skeptical of any information that comes from a group whose leader is scared of nail stars. 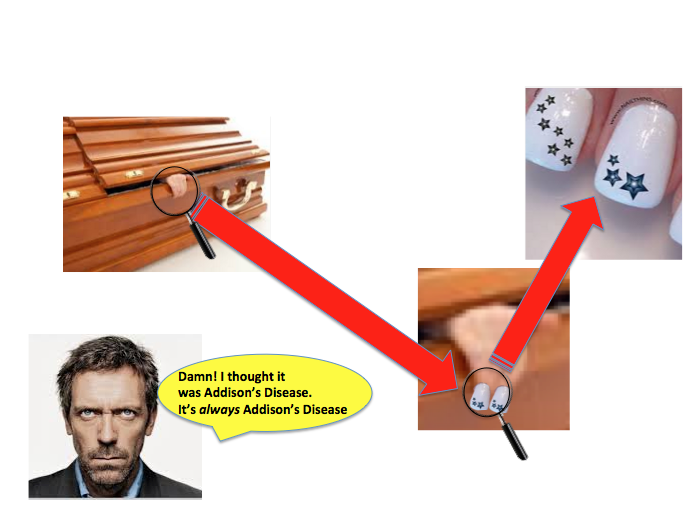 So, I guess it's only fair to take a look at how much of the satanic nail polish chemical was really in the urine of the unfortunate Swamp Things that absorbed it through their skin.

Let's take a look at the paper.  Of the 7 pages, and roughly 100 references, just pay attention to one graph. The rest means nothing: 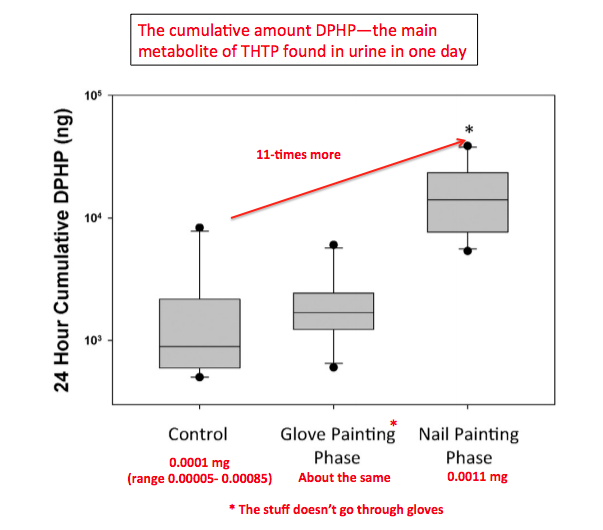 The total amount measured during a 24- hour period in the urine was:

Where's a bomb shelter when you need one?

This is what Heather While and her Jolly Pirates are making a stink over??? To put this into perspective, the estimated lethal dose of TPHP is 245 grams, which comes out to 223 million-times more than what is found in a woman's urine after having her nails done. Horrifying!


Please contact me if you can find an example that is better suited to fit the expression "pissing away your money," especially as it pertains to research.

The Washington Generals, apparently tired of losing virtually all of the estimated 20,000 games that they played, finally threw in the towel. The team called it quits on August 1, 2015.

We should only be so fortunate as to have Environmental Washington Generals to do the same.