Josh Bloom
I've seen some pretty awful tactics used by various self-promoters, quacks, and other invertebrates over the years, but this one may take the organic cake.

Internet huckster Mike Adams, who ranks right up there with Crazy Joe Mercola, in terms of spreading self-serving, harmful nonsense around the web has outdone even himself this time.

His September 9th article, entitled "Mystery virus EV-D68 exploding among vaccinated children; U.S. medical system clueless without a vaccine," promotes his anti-vaccine agenda in the most disingenuous, disgusting way—by implying that children who had been vaccinated were more likely to catch the severe respiratory virus that has infected children in ten states.

Writing on the always, um, make that never, reliable Natural News site Adams does a masterful job of distorting facts by clever, sleazy wordsmanship. Here are some examples:

"What CNN and other media outlets are not reporting, however, is that this outbreak is occurring among vaccinated children." Does this mean that vaccinated children are more likely to catch the virus? NO! It means that most children are vaccinated, and they will, of course, represent the majority of cases. But Adams is apparently trying to tie the two together in a cause vs. effect manner, which is not only nonsense, but harmful nonsense.

"Vaccine media propaganda rule #1) If an outbreak ever occurs among unvaccinated children, then the published stories will strongly condemn parents for failing to vaccinated their children while promoting vaccines as the one and only solution."

"No mainstream media outlet even dares mention the words 'immune support' for fear that people might realize a strong immune system is far better than a vaccine at preventing infectious disease."

So, Mike—what is a better way to protect children from deadly infections than by vaccination? Based on what you said above, the answer is to "support" your immune system. But how?

It's one damn strange coincidence that if you go to Adams' website store and search for the term "immune" you will get 56 hits. Some of these items include the "super food" 100% Organic Goji Berries Health Ranger Select. Unfortunately, this fine item is out of stock. But fear not. Chaga Extract Tincture—a real steal at $34.97 (plus shipping) for a one ounce bottle—is available.

And how could you possibly not want it, since it "may be one of the most important anti-aging supplements yet discovered*." And it also "contains beta glucans, the non-linear complex polysaccharides that give Chaga extract its potent immune supporting properties."

Despite a Ph.D. in chemistry, I have no idea what the hell this means.

And, in case you are wondering what the asterisk following "discovered" means, here it is:
*These statements have not been evaluated by the Food and Drug Administration. This product is not intended to diagnose, treat or prevent disease.

There ya go. Instead of giving your kid a measles vaccine, just spend $34.97 and give him a few drops of something that will not treat or prevent any disease. Makes perfect sense.

And if for some strange reason, if you think that the Chaga drops won't adequately protect your kid from every infectious disease known to man, you can step it up a notch: "Enerhealth Herbal Medicine Cabinet (Advanced)." This must be some really good sh####t, because: "[It contains] 43 items... The 'ultimate' herbal medicine collection, containing a massive collection of high potency medicinal herbs with a VERY long shelf life (5+ years). For home use as well as serious preparedness, this collection saves you money over purchasing these herbs separately, and their long shelf life makes them a great investment for both health and preparedness. In a collapse scenario, these may be worth more than gold."

And you'd better have a bunch of gold, since this fountain of youth will set you back $650.00. The crowd I run with doesn't have $650 to piss away on magic potions. Then again, I don't sell supplements on the Internet.

Should you be undecided whether to entrust the health and well-being of your family to Mr. Adams, consider some of the other fine advice on his site:

Baking soda cures cancer (as if we didn't all know this already): "Vernon Johnson mixing sodium bicarbonate with molasses.The pH level of our internal fluids affects every cell in our body.Chronic over-acidity corrodes body tissue, and if left uncheckedwill interrupt all cellular activities and functions. In other words, over-acidity interferes with life itself. It is at the root of cancer." Who knew you could cure cancer by spending $0.89 at Winn Dixie?


"Big Government pumps children full of chemicals and drugs to destroy their brains." It would seem that this also applies to certain adults as well.

"1,500 mental health patients have been drugged and sent to die alone by Nevada-run hospital since 2008, lawsuit claims." Better make that 1,499. At least one escaped.

While there is obviously a humorous element to this, it really isn't funny. Take a look at what vaccines have really done, courtesy of the CDC: 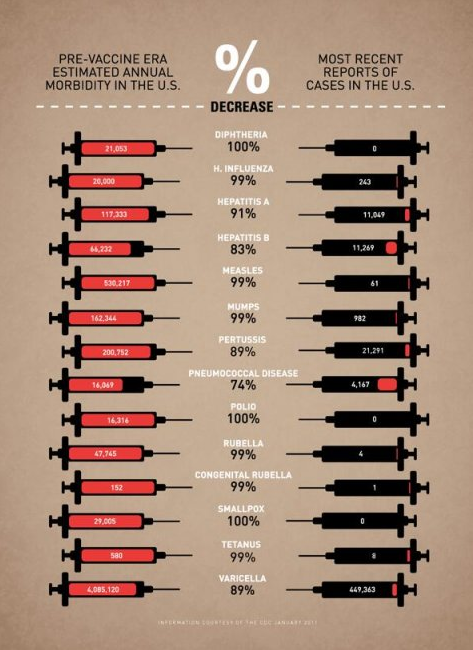 Vaccines—not garbage in a bottle—have essentially wiped out the most deadly infections that have ever plagued humanity. Infections that used to kill and maim millions of people.

This is real medicine—not a bunch of self-serving, and just plain crazy nonsense from the lunatics out there that will happily take your money, and threaten your children's lives at the same time.

I don't know how they can sleep at night. Maybe a supplement will help.