Why All That Generic Drug Price Savings Never Happened - Profits Are Too Low To Make Production Worthwhile
By Josh Bloom | August 27th 2015 05:30 AM | Print | E-mail

Tweet
A man goes into a butcher shop to buy some steak.

Pretty good joke, but even better when it's applied to what's going on now with generic drug prices. That is, assuming you can figure it out.

But, one thing is clear: They are going up, and really fast.

There are so many moving parts involved here that it's all but impossible to fully understand why generic drugs, which were supposed to save consumers huge amounts of money once the patent held by the inventor expired, have not done so.

Why? It depends on who you ask.

The Heritage Foundation blames the Medicare Modernization Act of 2003, which was the basis for Medicare Part D in 2006. The National Center for Policy Analysis does also. Both groups argue that price controls on generic Medicaid drugs have led to shortages of routine (mostly injectable or IV) hospital drugs.

Here is a statement from The National Center for Policy Analysis: "This program forces drug manufacturers to give discounts to outpatient clinics and hospitals that treat a high number of indigent or Medicaid patients, to Public Health Service hospitals and clinics, and to certain Federally Qualified Health Centers. Currently, the law requires manufacturers to give these facilities a 23.1 percent rebate off the average price for brand-name drugs and 13 percent for generic drugs on qualifying outpatient use." 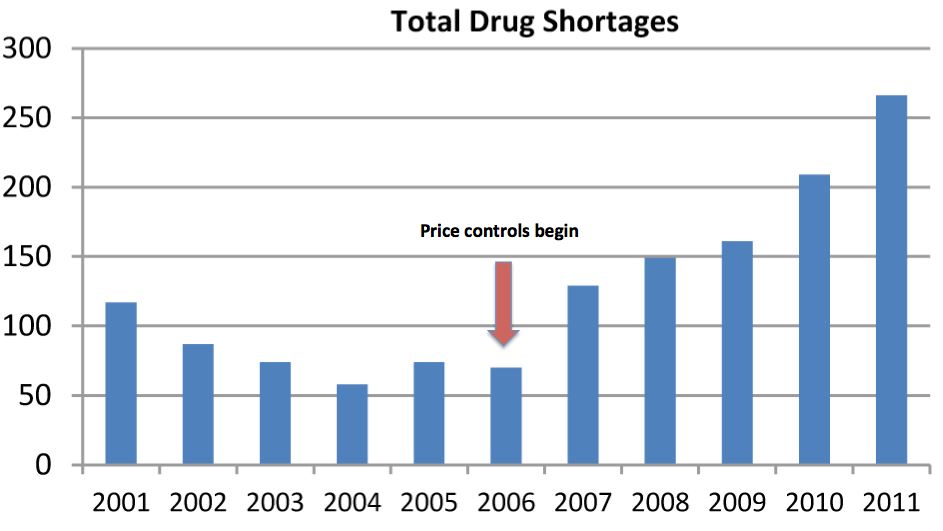 It is highly unlikely that the following is a coincidence: Other groups blame the "gray market," where large purchasing groups buy supplies of drugs that are in shortage, and resell them at huge premiums. Almost certainly, these two factors work together. Without drug shortages, the gray market would not exist. Without the gray market, shortages and price gouging would be mitigated.

My 2011 Op-Ed in the New York Post, "Running Out of Common Drugs," describes the ramifications of drug shortages in hospitals. Some are horrifying:

A hospital, short on a general anesthetic, is rationing the drug. Doctors administer an insufficient dose, and a surgical patient awakens during the operation.

Out of morphine, some hospitals switch to hydromorphone, a similar but stronger narcotic—but without adjusting the dose. Two patients die.

Cancer patients, some nearly finished with their chemotherapy, are told that they can’t complete their treatment because the drug ran out. Some are switched to inferior regimens; some get nothing.

An intubated woman, given an inadequate dose of an IV sedative, tries to pull the breathing tube out herself and bites off a piece of her tongue.

As a result of low profit margins and manufacturing difficulties, generic drug companies simply stopped making products that were more trouble than they were worth. In certain cases, only one (or worse—none) company manufactured certain generic drugs.

This not only led to shortages, but also much higher prices, and in one case in particular, an obscene price increase for doxycycline—the first line treatment for Lyme disease.

My 2014 Science 2.0 piece describes price gouging for doxycycline: "Jordan-based generic company Hikma found itself in the enviable position of having a monopoly on the drug, which is first-line therapy for Lyme disease, and an important antibiotic for other bacterial infections."This statement would be hard to challenge. Once Teva stopped making the drug, Hikma increased the price of doxycycline—a 50 year-old drug—from 20 cents per pill to $18.49.

Why? Because they could.If there's anything here that is clear, it is something that those who "crafted" laws that led to this mess should have known. Price controls don't work, except for creating shortages. Shortages of drugs kill people. And, ironically, price controls of generic drugs have led to much higher prices than we would have seen if Congress had left the whole thing alone.

Republished from American Council on Science and Health. Read the original here.