Ladislav Kocbach
There are now many affordable and even out right cheap tablets - computers with touch screens - available, useful computers for even less than the famous $100 laptops were supposed to be. These are sold with various versions of the android system, with a linux kernel inside. They are basically small unix-like computers, only with operating system somewhat destroyed by the manufacturers or the various dealers. There is process called "rooting" when one is using procedures which are based on an error of this manufacturer's "extra features" to disable all these protections of the user against herself or himself, so that the computer (tablet or phone) can be used for "unintended" use, i.e. among other things for creative and scientific purposes.

A whole community exists to work on this, but all that is not suitable activity for everybody who might need a useful tiny computer. Fortunately, there are others who are developing such machines - the most famous now is the $35 raspberry Pi. The rPi is not a whole system, it is just the computer able of all types of work in a laboratory - and addition of many various peripherals - in principle. But the screen and keyboard, if and when needed, must be added.

I can imagine labs where devices are steered by descendants of rPi in large numbers, doing the data collection, logging transporting to other storage devices etc. Some software is missing still, but in principle similar development will take place soon, in the so called post PC era, when the standard PCs will not be an obvious first choice.

But here I just want to show my personal little experiment. What you will see on the pictures is one such rPi, running the recommended linux version on its SD-card (used before in my compact camera, the card, not the linux) , equiped with its wired ethernet connector, but no screen, no keyboard. Usually I use an old monitor and an old USB keyboard and mouse to explore the rPi's secrets. But here I decided to demonstrate how one could use a cheap tablet, no iPad, no Galaxy, but something like $150 ainol.

And I did not want to do any rooting, no time consuming hacking. So what you see: the tablet can be connected to wired ethernet (most can be in principle, some out of the box, like the ainol, and some can be enabled I am told. So what you see is a standard raspberry Pi with added software VNC and on-screen keybord, exporting its screen by VNC to the network, and the android free VNC viewer on the tablet. And this means tha the tablet has a command line linux on it now, with the mouse and keyboard functions taken by the touches on the tablet. 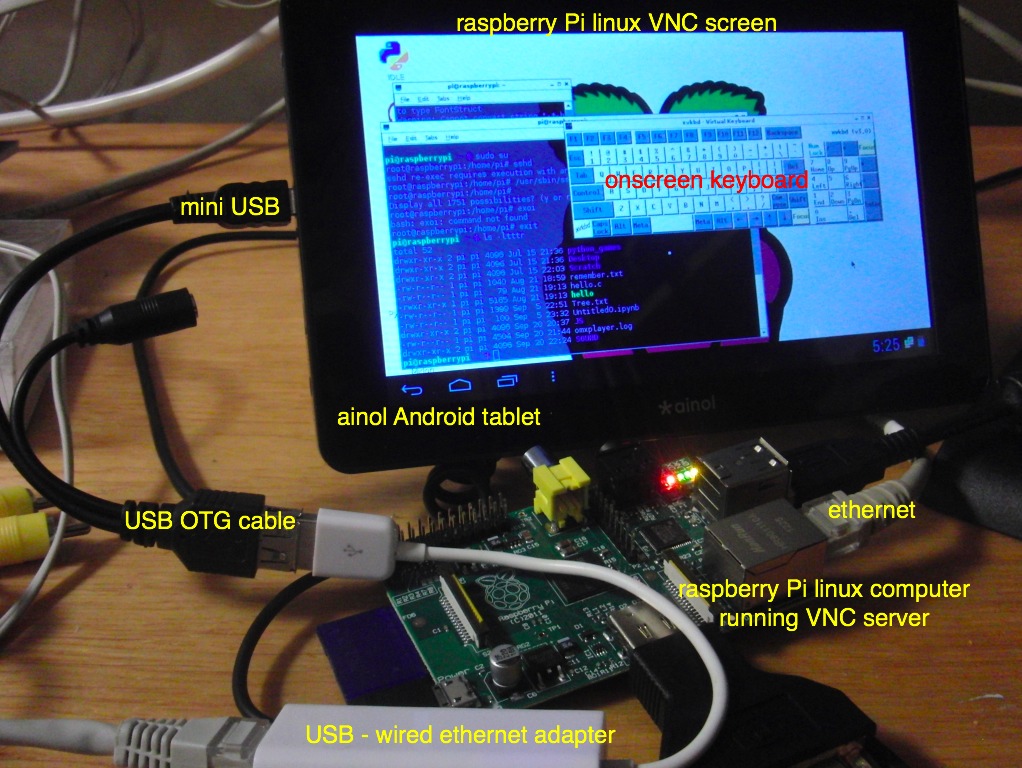 The first picture shows the "experiment", the second is a screen snapshot of the ainol android tablet. The keyboard is naturally much more PC-like than any iPad or Android on-screen keyboard. So I demonstrated to myself (and those very few others who care at all) that we can use all those cheap tablets to talk to all those cheap computers. Thje purpose of these computers is not to generate revenue of the big computer companies, they are designed and made for creativity and science (mainly education originally). And here is a link to my heros, the raspberry foundation - http://www.raspberrypi.org/  and a description at http://en.wikipedia.org/wiki/Raspberry_Pi. 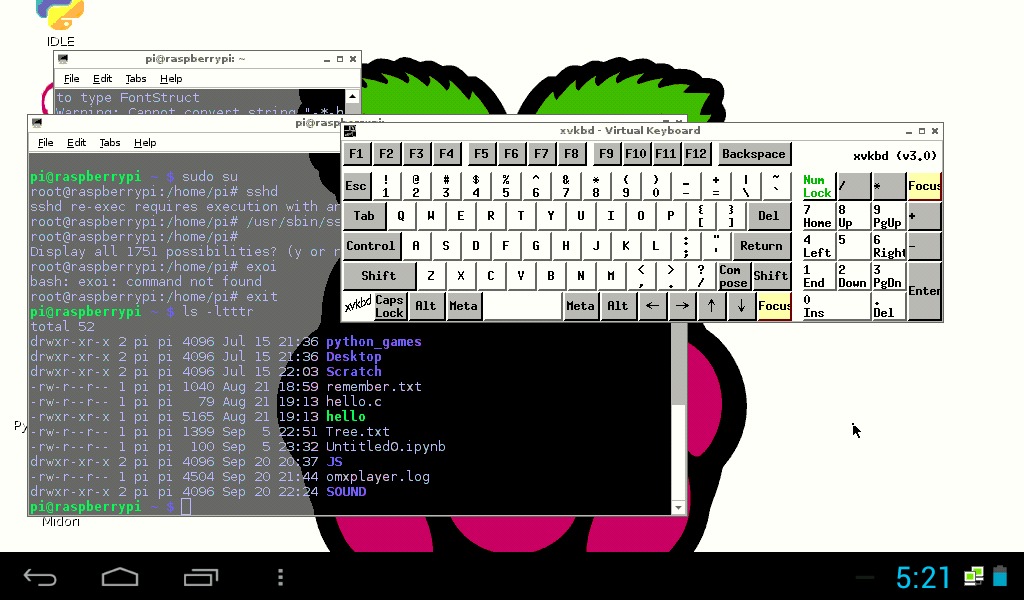