Galactic Fountains and Carousels:State of the Art Simulation of the Evolution of Galaxies
By Professor Mark R.... | April 1st 2020 07:04 AM | Print | E-mail

Their model finds that the geometry of the cosmic gas flows around galaxies determines galaxy structure, and vice versa.

“Numerical experiments of this kind are particularly successful when you get out more than you put in. In our simulation, we see phenomena that had not been programmed explicitly into the simulation code. These phenomena emerge in a natural fashion, from the complex interplay of the basic physical ingredients of our model universe," says Dr. Dylan Nelson from the Max Planck Institute for Astrophysics, Garching.

TNG50 features two prominent examples for this kind of emergent behaviour. The first concerns the formation of “disc” galaxies like our own Milky Way. Using the simulation as a time machine to rewind the evolution of cosmic structure, researchers have seen how the well-ordered, rapidly rotating disc galaxies (which are common in our nearby Universe) emerge from chaotic, disorganised, and highly turbulent clouds of gas at earlier epochs. As the gas settles down, newborn stars are typically found on more and more circular orbits, eventually forming large spiral galaxies – galactic carousels. 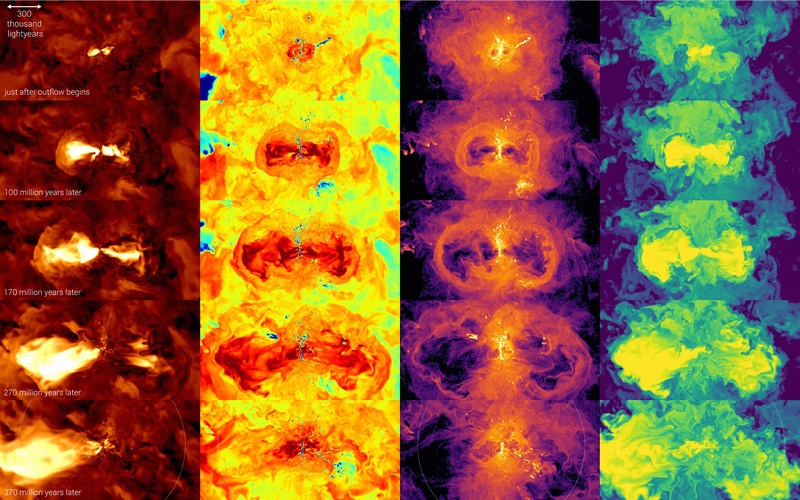 Outflow of gas from a galaxy. From top to bottom, each row represents a different snapshot, spanning 370 million years of cosmic evolution. The outflow is driven by energy set free near the active supermassive black hole in the galaxy’s center. From left to right, the columns show false-color representations of the velocity, temperature, density and heavy element content of the galaxy. The galaxy itself is the cold (blue, second column from left) and dense (yellow, third column) disk of star-forming gas visible as a small, vertical structure in the center of each image.

As these galaxies flatten out, researchers found another emergent phenomenon, involving the high-speed outflows and winds of gas flowing out of galaxies. This launched as a result of the explosions of massive stars (supernovae) and activity from supermassive black holes found at the heart of galaxies. Galactic gaseous outflows are initially also chaotic and flow away in all directions, but over time, they begin to become more focused along a path of least resistance.

In the late universe, flows out of galaxies take the form of two cones, emerging in opposite directions – like two ice cream cones placed tip to tip, with the galaxy swirling at the centre. These flows of material slow down as they attempt to leave the gravitational well of the galaxy’s halo of invisible – or dark – matter, and can eventually stall and fall back, forming a galactic fountain of recycled gas.

This process redistributes gas from the centre of a galaxy to its outskirts, further accelerating the transformation of the galaxy itself into a thin disc: galactic structure shapes galactic fountains, and vice versa.