Professor Mark R. Smith
After North Korea withdrew from the Treaty on the Non-Proliferation of Nuclear Weapons in 2003, it staged five underground nuclear tests including a suspected hydrogen bomb in 2017.

A  team of scientists have used satellite data to augment measurements of tests on the ground. They found that the most recent test shifted the ground by a few metres, and estimate it to be equivalent to 17 times the size of the bomb dropped on Hiroshima in 1945. 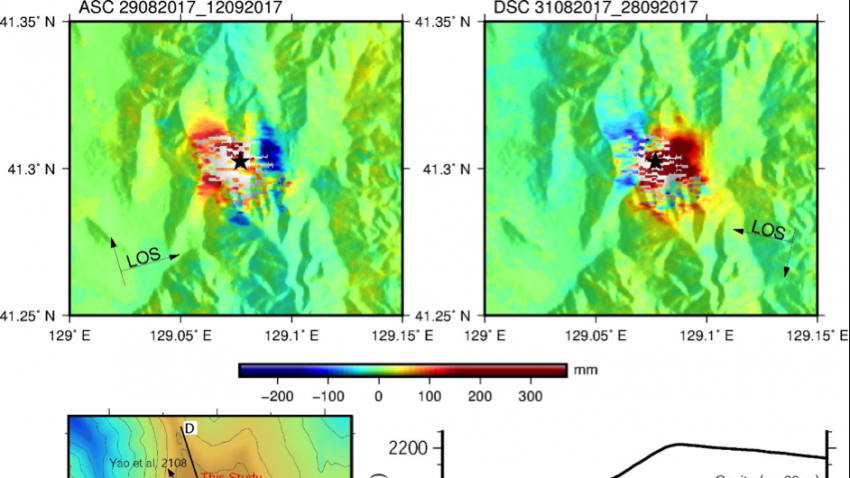 (Top) InSAR data in ascending and descending orbits depicting surface deformation associated with the 2017 nuclear test. (Bottom) Comparison of the source location of the 2017 nuclear test estimated from this study (red star) with other estimations. Topography along profile CD showing the cavity, deformation zone and probable location of tunnel. Note that the sizes of the cavity and deformation zones are exaggerated by 5 times for better visualisation. Credit: K.M. Sreejith / Space Applications Centre / Indian Space Research Organization. Licence type: Attribution (CC BY 4.0)

Detection of nuclear tests relies on seismic measurements using the networks deployed to monitor earthquakes but there is no seismic data from stations near that test site, so they data from the ALOS-2 satellite and Synthetic Aperture Radar Interferometry (InSAR), to measure the changes on the surface above the test chamber resulting from the September 2017 explosion, sited at Mount Mantap in the northeast of North Korea. InSAR uses multiple radar images to create maps of deformation over time, and allows direct study of the sub-surface processes from space.

The new data suggest that the explosion was powerful enough to shift the surface of the mountain above the detonation point by a few metres, and the flank of the peak moved by up to half a metre. They say the explosion took place about 540 metres below the summit, about 2.5 kilometres north of the entrance of the tunnel used to access the test chamber. The team predict using deformation that the explosion created a cavity with a radius of 66 metres, with a yield of between 245 and 271 kilotonnes, compared with the 15 kilotonnes of the ‘Little Boy’ bomb used in the attack on Hiroshima in 1945.