Tommaso Dorigo
Researchers who blog are a rare and endangered species.

As far as rarity is concerned, it is easy to understand why that is so. Scientific research is a round-the-clock occupation, not your regular nine-to-five job. If a researcher has spare time, he or she is expected to invest it in doing more research: for Science is a mission, not a job! Because of that, finding the time to do outreach in a blog, broadcasting recent scientific results, or just expressing one's views is a demanding challenge, especially when one also has a family to attend to.

But scientific bloggers are also an endangered species, especially when they work within large collaborations: these have started to get equipped with blog guidelines and strict rules of conduct that demand you to avoid talking about anything that is said or happens at internal meetings, to not distribute material that is not approved (is the document at the above link public ? Damned if I know !), to wait before distributing approved material until somebody presented it for the collaboration at a conference, to not speak about your colleagues without prior consent -even if you are going to say good things-; etcetera, etcetera, etcetera. Hell, I recently found out that I cannot even write if I myself did an analysis and brought it to publication within the collaboration! I cannot describe my own work with a personal slant because it would single me out from the 2500 other researchers who signed the paper. 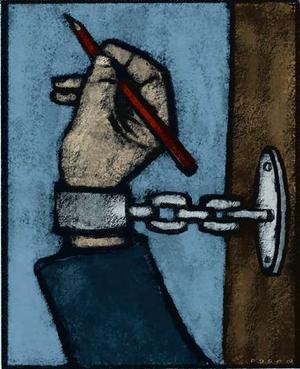 Be sure to understand: I am not criticizing those rules or their need here. That would be a very complex issue, which demands more space and an analytical effort. All I want to point out is that if a blogger fails to comply to those rules, he or she is subjected to various kinds of harassment, which may become severe in some cases, as I have unfortunately discovered personally. In that sense, bloggers in scientific collaborations are an endangered species.

On the other hand, we usually receive no support from our employers. A blogger is perceived as somebody who employs his or her time in a futile way; plus, one often generates envy or annoyance, despite all attempts at not doing so. Your colleagues will feel you get unfair exposure with the media, or will be scared that you talk about them. Your boss will get in your office and frown if he or she sees you are writing on your keyboard -surely you must be blogging!

I expressed these and other concerns last week during a talk (see picture below) and the following round table at a conference on Physics outreach at Frascati, ComunicareFisica 2010. The round table discussed how blogs can help outreach, and it was lively and interesting, but I was the only one to vouch for support from the employers of bloggers. If INFN (the italian institute of nuclear physics who pays my salary, as well as that of 2000 other researchers and admininstrative staff in Italy) showed just a little support for its employees who spontaneously do outreach through blogs, this would boost not only the confidence of the existing bloggers, but it would push others into broadcasting their science. I went as far as suggesting that INFN should issue a statement where it expresses appreciation for the individual effort of bloggers who broadcast and popularize the science they do. This already would make a difference: a researcher would not feel alone when dealing with a scientific collaboration on what was discussed in a blog post, or when defending against mobbing in the workplace. But there are other ways: if INFN wants to acknowledge the importance of outreach more concretely than it is presently doing, it could link blogs from its web pages, run an aggregator of the best posts, or -why not?- recognize the hours spent blogging as part of a researcher's working time.

Now, all the above appears very distant in space-time. On the other hand, there are signals that the matter is perceived more favourably elsewhere. Today I received a very interesting invitation in this respect. The organizers of a big international conference, ICHEP 2010 -which will be held in beautiful Paris in July- have decided they will "institutionalize" a phenomenon that would be happening anyway: the live blogging from the conference.

I was asked to take part in the endeavour, and I think I will indeed do it. Of course, readers of this blog will still get to read my articles from here; but a temporary duplication of a few of the posts related to the conference will happen in the ICHEP web site.

For now, kudos to the local organizing committee of ICHEP for realizing the importance of blogging as a way of communicating science to the public, as well as among insiders!
A Quantum Diaries Survivor
More Articles All Articles
About