8.55 AM. So here we go. The seminar is about to strt.... I can see all the big names entering the main auditorium, most notably Peter Higgs. People are clapping hands.

9 AM The CERN security guys in the aisles have prevented the main auditorium from getting crowded... Safety first. There is just one person which is sitting on the steps, and they have not kicked him out yet.

9.05 AM Now they are starting. Rolf Heuer is taking the stage. He is reminding everybody that this is also an opening of ICHEP in Melbourne. He says we are not starting in alphabetical order, so Joe takes the stage.

Joe takes the mike. CMS is on. He will "give the status of the CMS search". Compressing the work of thousands of people in 127 slides that he will show here.

He focuses first on pileup: as many as 40 interactions per bunch crossing, which make it difficult to decrypt the event. Joe seems very nervous. Go Joe!

He makes the joke about CMS having a spare when he shows a picture of all the CMS people in front of a picture of the detector.

Where we stood last week: he points out that one can predict the mass of the Higgs boson from radiative corrections. The figure shows that the W and top masses are compatible with a low-mass Higgs not yet excluded by the direct searches. It is already an admission that things are about to change.

Joe mentions that there are four main production channels, and at low mass five main decay modes. We have results for ALL of these production and decay modes.

He makes the point that the various decay modes have comparable sensitivity. We are in a position to be able to exclude the standard model, by excluding the Higgs across the whole low-mass region.

He shows a sensitivity of the discovery at 6-sigma level for a Higgs mass of 125 GeV. This p-value plot will be later updated with the real result, but we now know that CMS has enough sensitivity with the current data to actually discover the darn thing.

He now describes the CMS detector, pointing out its strong points. The really exceptional thing is the electromagnetic calorimeter, made of crystals, which is crucial for Higgs reconstruction in the diphoton decay mode.

He looks at the watch and addressing Heuer says "I am going to run over, Rolf...".

He then discusses reconstruction of the events, electrons, and other objects. He is spending lots of time on the details of this. I wonder how much time will people have to look at the money plots...

So let us go to the Higgs to two photons search. The mass distributions are the ones shown below: 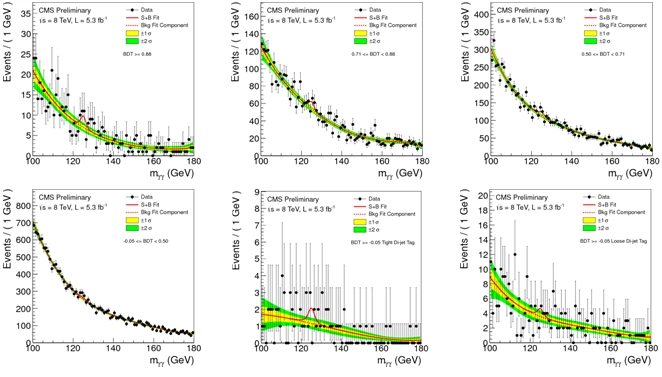 The red curve is the expected 125 GeV Higgs signal. Below you can see a comprehensive plot that weights events by signal to background ratio. 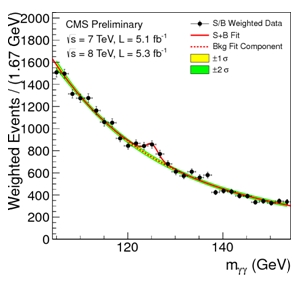 The signal can now be visible !!!

The p-value for this channel alone is shown below: 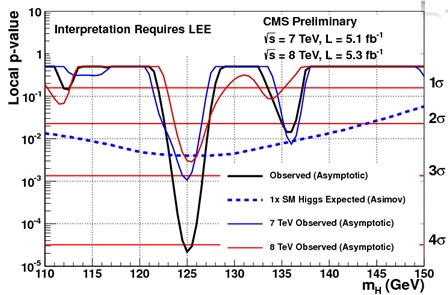 So CMS by combining 2011 and 2012 gets to over 4-sigma by this channel alone. In the figure you see the p-values of the 2011 and 2012 data separately, and combined. The 135 GeV thing is shown to be a fluctuation, while the 125 GeV signal strengthens to a observation-level significance.

In the decay channel involving two Z bosons further decaying into four leptons, the signal is numerically smaller but the signal to noise ratio is higher. The mass distribution found by combining the 2011 and 2012 data, after a careful blind reoptimization of the search strategy, is the one shown below. 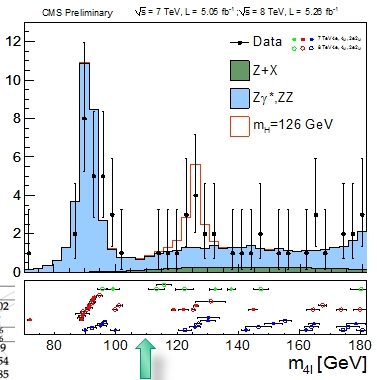 You can see that the data follow nicely the background predictions (in blue) everywhere except at 125 GeV, where an excess is observed, which is well compatible with the expected Higgs signal.

One question for this final state is: how does the signal distribute in the mass of the two Z boson candidates ? One can answer by looking at the scatterplot of the two masses, for the events in the vicinity of 125 GeV which make up the signal. 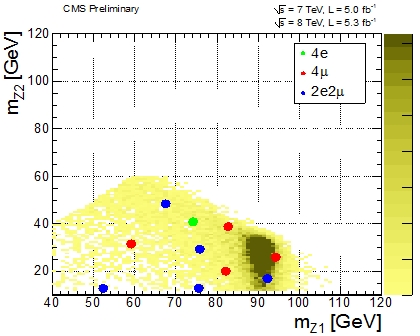 This distribution is a very interesting one... There are many events (the big points) with both Z off-mass-shell. The yellow/brown blob is where you would expect the events to pile up. The effect, however, is not significant from a statistical standpoint.

CMS has a very performant kinematic discriminant that can select preferentially Higgs decay from ZZ backgrounds. If we cut by requiring that the signal probability is larger than the background porobability we get the following mass peak, which is a nice confirmation that what we see is compatible with the kinematics of the Higgs boson, and which gives a smaller signal but which stands out better. 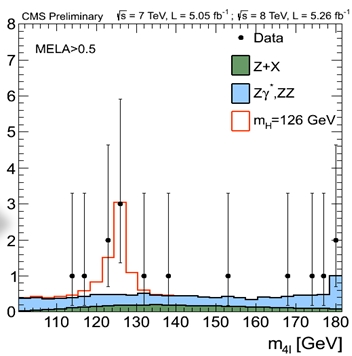 The expected significance of the ZZ final state is 3.8 standard deviations, while we observe 3.2. A bit unlucky, but very consistent with the signal.

If the Higgs to gamma gamma and Higgs to ZZ channels are combined, the combined significance is of 5.0 sigma. People in the room applauds !!!!

Joe comments: "it's nice to be at five"!

Now the other channels are discussed: WW, which however contributes only marginally to the expected significance, is the first to be discussed. But Joe is running out of time. He mentions that by adding H->WW to the two other bosonic channels, the global significance rises to 5.1 sigma, expected 5.2.

By adding the other channels, CMS actually loses something, mainly because of downward fluctuations of backgrounds in the tau-tau channel. The final plot of p-value is shown below. 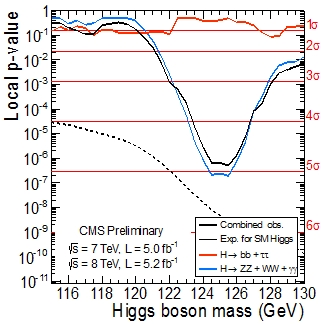 The cross section of the Higgs measured by CMS is in very good agreement with SM predictions. Below you can see a breakdown of the measurement (which globally is 0.80+-0.22 times the SM) in the various decay modes. 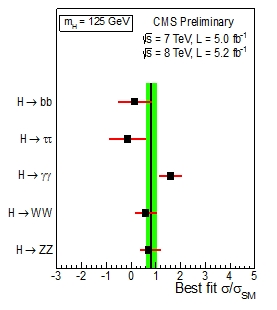 Finally, CMS tries to answer the question "is this a SM Higgs" by fitting for the coupling factors to fermions and bosons, CF and CV. The fit prefers a slightly smaller coupling to fermions, but there is good consistency with the standard model predictions, as shown below. 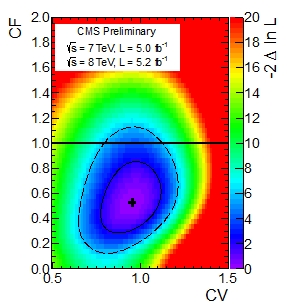 The two coupling modifiers shown here are expected to lie at 1.0 in the standard model.

The bottomline is that the global significance is 4.9 standard deviations, while a sensitivity of 5.9 would be expected for a SM Higgs, given the data size and analysis techniques. CMS has been a bit unlucky... But this is still a discovery !

The mass is measured to be 125.3 +- 0.6 GeV. Precision measurement of Higgs properties
already!

The bottomline: we have observed a new boson with a mass of 125.3 GeV at 4.9 sigma significance. The audience applauds.

To clarify: the high-mass-resolution channels have a combined significance of 5 sigma, so there is no need to nit-pick. CMS chose to report also the "negative" result of the low-mass-resolution channel H->tau tau (ATLAS does not), but this still is a discovery.
A Quantum Diaries Survivor
More Articles All Articles
About