Tommaso Dorigo
By now it's been written on so many newspapers and magazines -including Nature (the magazine, not the bitch)- that if a colleague of mine tries to reproach me for writing about the impending seminar at CERN, where ATLAS and CMS are vented to be showing observation-level signals of a new particle which smells like the Higgs and quacks like the Higgs, I will publically send him or her to hell.

Besides, I have been cited as a "tease" in a nice summary which appeared in the Atlantic Wire site today. The line describing me (next to a picture that is N years old but which is dear to me for some reason) is the following:

Claim to Fame: Where some people enjoy breaking the news (see above), Dorigo enjoys in teasing it out. We know he knows things (CERN, cough CERN), but he can't comment on them. Instead, he inundates you with context about what those announcements would mean--you know just in case the rumors are true. And we don't think anyone who devotes that much time and that much science into explaining a "maybe" rumor, would do it if the rumors were wrong.

Basically: Think of him like a silent approval. He won't necessarily break the news, but it wouldn't hurt to read between the lines into his posts (assuming you're fluent in science)

So luckily somebody is willing to admit that I do not distribute secrets here... CMS colleagues, please take note.

In any case, to be on the safe side I will not even come close to disclose anything secret here today, but rather explain to you what is happening these days at CERN. Analyzers are feverishly giving the last touches to the most important graphs, unfortunately exactly the ones that took the most time to put together. Conveners are busy producing text for the press conferences and interviews, and translating them to all known languages on Earth. Spokespersons are overburdened with the task of producing well-balanced talks which will be broadcasted worldwide and which will probably make history. Theorists buzz around, picking up a sigma here and a p-value there, and by now they know how the full puzzle looks like better than you and me.

People like me, instead, sit in the back row at approval and rehearsal meetings, and give that bit of not-too-insightful advice here and there. As the chair of the statistics committee of my experiment I am sometimes even listened to, but it is awfully hard to change or even only modify slightly a consensual view in a collaboration of 3000 people, based on foreign-accent-English arguments and lots of arm waving. To my defense, however, let me tell you my schedule of today: in the morning I had to revise a 30-page proceedings after receiving some minor tweaks from a reviewer; I also had to write a 1500-word article for an Italian newspaper; then I had to review a 45-page-long paper draft for my collaboration. In the meantime, I followed six hours of heated meetings, where the seminar of tomorrow was taking its final shape, and answered O(100) emails. So maybe I am a useless blogger, but to me it felt like a real day of work.

So much about me. Instead, let me tell you what is going to happen tomorrow. The seminar is scheduled at 9AM, and the doors of the Main Auditorium will be opened at 7.30AM in the morning (presumably to avoid people to go there in the night and sleep on a bench to ensure a good seat). The auditorium may look big if full of people as you've probably already seen it in broadcasts of past events, but it is actually not so big for events of this kind. And indeed, it is even smaller when you think that over 55% of the seats -yes, of course the good ones- have been marked as reserved by the management: 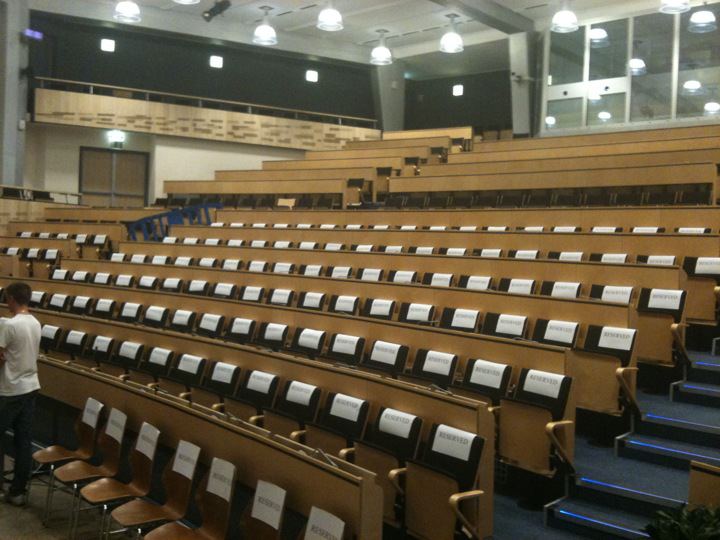 Yes, the white sheets attached to the front seats read "Reserved" in Bodoni 72.

I will not comment the choice, and just tell you that in order to ensure I will be able to blog live tomorrow, I will wake up at 5AM and queue up in front of the doors of the auditorium. So I am off to get some sleep now!