Tommaso Dorigo
Two days ago I discussed at ICFP 2012 the most recent results of the CMS experiment at the CERN Large Hadron Collider. In the allotted time of my talk I could only cover few analyses, and I obviously chose some of the most interesting ones, so that was already a summary. Here I am bringing the information collapse one step further, by giving a itemized summary of some of the points I made, just in case you are interested. If you want to, you can also download the original slides of my talk from here (but be careful, it's a 8Mb file).

- The LHC has yielded over 5 inverse femtobarns of proton-proton collisions to CMS to analyze in 2011, and these data have been used for dozens of new results. Now we have on tape another 5/fb of data from the 2012 run, but these have not been looked at yet (results will be ready in a few days).

- CMS searched for the Higgs boson in eight independent final states, further divided in over forty categories. The combined results of these searches say that the particle must be lighter than 127 GeV (and heavier than 115 according to LEP II), or heavier than 600 GeV. We know the latter is not an option as far as the Standard Model is concerned, because it would now be utterly inconsistent with other electroweak measurements. So we might argue that if the SM Higgs exists, we already know its mass to better than 10% accuracy.

- CMS finds a signal with a local significance of 3.1 standard deviations at 124 GeV. If this excess is due to the Higgs boson, it is likely that the new data, once analyzed, will produce additional evidence which can be considered conclusive proof for the particle's existence. 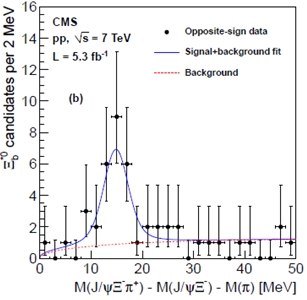 - A new baryon, the Ξb*, has been observed in its fully exclusive cascade decay into J/ψ, proton, and pions (with intermediate Ξb and Λ states). Its mass is just short of 6 GeV (see picture on the right, showing the peak in the distribution of Q-value of the two-body decay Ξb*-->Ξb π).

- Rare decays of the Bs meson have been searched, and a tight limit on the Bs->μμ decay has been obtained by combining CMS results with LHCb and ATLAS ones. New physics models are strongly constrained by this limit because many realizations of NP would yield enhancements in the branching ratio for the dimuon decay mode.

- CMS now measures the top quark mass and cross section in a number of different techniques. The precision on the top mass is reaching the Tevatron average (1.25 GeV total error now). A new era of precision top physics measurements has started, with e.g. limits on Flavour-changing neutral current top decays constrained at the 0.34% level, and top-antitop mass difference measured to within 0.5 GeV (of course it is zero!).

- A large number of interesting searches for new physics returned null results. Supersymmetry has been investigates in dozens of possible signatures, with no positive result.

Below is my conclusions slide: 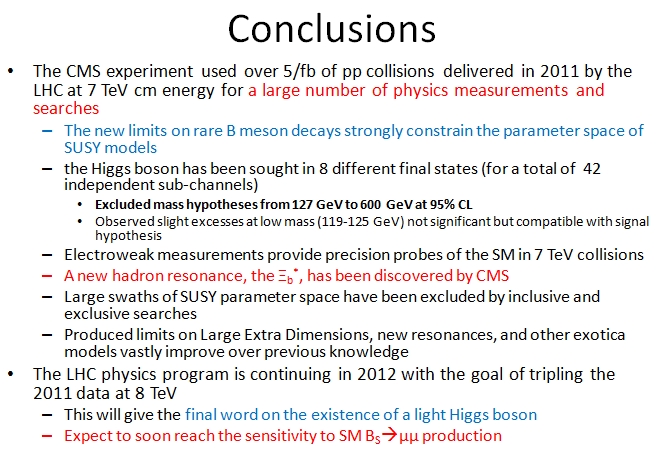