Tommaso Dorigo
I am just back from a vacation to Greece, where last Sunday was orthodox Easter. My fiancee Kalliopi is Greek, and it was about time for me for me to experience a bit of Greek customs. So we flew to Athens, and then headed to Salamina, where I had a lot of fun the Greek way in the company of a very cheerful dozen of relatives and friends.

Among the obligatory ingredients of a Greek Easter is the roasted lamb. It is cooked all in one piece, on a huge skewer, by rolling it for hours over hot coals. Its appearance is a bit disturbing at first, that is until the smell start to turn from that of a corpse to that of delicious food.  Below you can see me in front of the thing as it was already in the good-smelling and edible-looking phase. 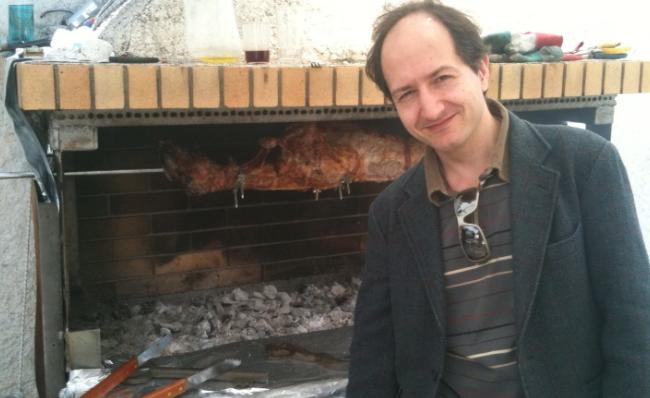 The peculiar thing about the whole ritual is that by the time the lamb is ready to land on your dish, you have already eaten enough calories for a couple of days. In order to get even, one has to plan the rest of the month as a very sorry time of dietary restraint.

Back to the lamb, the interesting thing is that we are usually unaccustomed to seeing your beef attached to the head of the animal until the time you eat it. Maybe because of that, looking at the thing I found myself thinking I would not be too surprised to hear the animal complaining about the awkward treatment. But instead, it roasted in silence, and I'm pretty sure it did not let go a sound even when it was finally sliced and served.

The silence of that Easter lamb reminds me of the silence with which these days Supersymmetric theories are going down one by one, almost by the day. While collecting data at 8 TeV and getting ready to squeeze it for new results, ATLAS and CMS are publishing the remainder of their searches for SUSY signatures in their 2011 datasets. And every new result that gets published
typically kills one or two of the interesting points of "natural" low-energy Supersymmetry which had been left alive by the previous searches. For instance, if you check the public page of the ATLAS results here, you can see that no less than five new negative results of SUSY searches have appeared in the course of the last month.

So where are the theorists whose favourite theories are being slaughtered ? Are they sleeping in silence, afraid in the night, while they hear the sounds of their pets going down one by one, as Jodie Foster's character  in the famous movie ? I would like to invite them here to discuss their feelings, but I guess their agenda is already full with psychotherapy appointments ;-)
A Quantum Diaries Survivor
More Articles All Articles
About