Tommaso Dorigo
Of the dozens of new physics models which are currently on the market of Standard Model extensions and plug-ins, the ones hypothesizing the existence of additional dimensions of space-time beyond the 3+1 we know about are definitely among the most fascinating.

Imagine what a discovery would be, if we found out that our senses do not really represent any faithfully the reality in which we are immersed. I could hear the tumult from astrologists, occultists, ufologists, sellers of pseudoscience: "Aha! See, there's more than meets the eye!". We would instantly get flooded by ex-post justifications of why Jupiter does influence our lives (of course, through the extra dimension!), as well as how the pyramids got erected by aliens going through some extra-dimensional tunnel. It would be horrible, but it would also be fun! And after a few months spent handling the hit to science caused by the discovery, we could indeed start thinking at interesting ways to exploit it.

All the above does sound like science fiction. And the general idea does come from a period of time when science fiction was in its golden age: the thirties of the past century. In those years the theorists Kaluza and Klein devised a model of extra dimensions which were too small to be detected by our senses, and "folded" onto themselves. The folding would generate a periodic boundary condition on the wavefunction of the particles, which would result in an apparent "tower" of states. To us they would look like copies of our SM particles, but with higher masses. I think your best bet to know more about this topic is to visit Sabine's Backreaction post on the matter.

It is a very interesting idea, and we can actually test it at particle colliders. So far, most searches for large extra dimensions have concentrated in a modified version of the KK model, whereby the generic signature involves the disappearance of a particle in the extra dimension: one would then observe one particle recoiling against "nothing at all" -the disappearing partner. DZERO, however, tried to go directly after the Kaluza-Klein particles that are predicted to be associated to each Standard Model particle in the so-called "minimal Unified Extra-Dimensions" model, mUED. If you know supersymmetry, this will not sound too strange: each known particle gets its counterpart. In particular, one also gets a "lightest mUED particle" which escapes undetected. Is large missing energy a signature, then ?

Not in the DZERO search: the masses of the KK particles might be such that the produced cascade decays do not yield a significant missing energy. The considered model sees the creation of KK quark-antiquark pairs, which decay yielding charged leptons and quarks. The most striking signature arising from such a process might be the presence of pairs of same-sign lepton pairs (from one of the decay chains depicted in the diagram above, or from two separate decays of KK quarks).

DZERO sought for same-sign lepton pairs of small transverse momentum, which could be sizably contributed by the KK decays. If you look for same-sign electrons or muons (or electron-muon final states) at a hadron collider, you are going to have to fight backgrounds which come mainly from electroweak processes such as W+jets, Z+jets, and diboson processes; plus of course QCD processes yielding fake leptons. This is what appears from the graph below, showing the transverse momentum of the leading muon in the event (I should have said earlier that DZERO base their search on a sample of events collected by a inclusive muon trigger - so a muon is always present there). 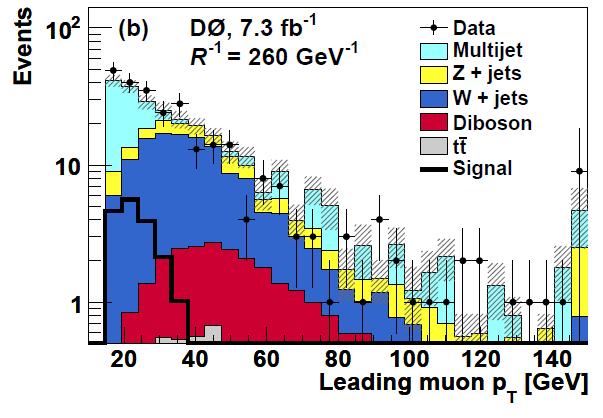 A boosted-decision-tree discriminant constructed with the most discriminating kinematic variables is put together to put in evidence a possible discrepancy of the data with Standard Model processes. The discriminant output is shown below. The black histogram representing a possible signal is well separated from the main background sources. The data points (black circles with error bars) are in good agreement with the sum of backgrounds (dominated by the multijet component, in cyan, and W+jet production, in blue). 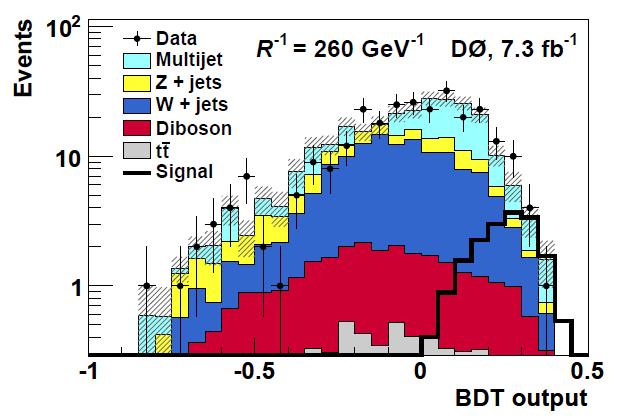 Fitting the output of the BDT allows DZERO to place upper limits on the possible signal contamination. When compared with the expected signal cross section, which is a function of the compactification parameter R, one gets a lower limit on R.  This is shown in the figure below, where the green-and-yellow band shows the predicted range of upper limits that the analysis could set, given the amount of analyzed data and the search technique. Since the masses of KK particles depend on R, the R limit allows to exclude masses of the new KK quarks below 317 GeV, which is the best way of summarizing the search result. 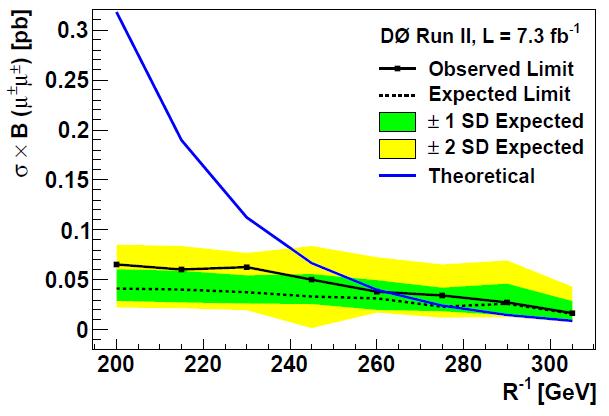 I congratulate the DZERO folks for this interesting new result. You can read more information on the search in the DZERO paper.