Tommaso Dorigo
One of the issues that emerged in the discussion of whether researchers should be bloggers is the fact that it is always dangerous to wear multiple "hats", i.e. carrying multiple responsibilities which may sometimes come in conflict with one another.

Of course this is a very common and old problem. I am indebted to Jim S.M., who sent me a few excerpts from Churchill's autobiography, which are very relevant to the issue besides being quite amusing:

DURING the first three weeks of my captivity, although I was a party to all plans of revolt or escape, I was engaged in arguing with the Boer Authorities that they should release me as a Press Correspondent. They replied that I had forfeited my non-combatant status by the part I had taken in the armoured train fight. I contended that I had not fired a shot and had been taken unarmed. This was strictly true. But the Natal newspapers had been captured by the Boers. These contained glowing accounts of my activities, and attributed the escape of the engine and the wounded entirely to me. General Joubert therefore intimated that even if I had not fired a shot myself, I had injured the Boer operations by freeing the engine, and that I must therefore be treated as a prisoner-of-war. As soon as I learned of this decision, in the first week of December, I resolved to escape.

In the various little wars of the previous few years it had been customary for military officers on leave to act as war correspondents, and even for officers actually serving to undertake this double duty. This had been considered to be a great abuse, and no doubt it was open to many objections. No one had been more criticised in this connection than myself for my dual role both on the Indian frontier and up the Nile. After the Nile Expedition the War Office had definitely and finally decided that no soldier could be a correspondent and no correspondent could be a soldier. Here then was the new rule in all its inviolate sanctity, and to make an exception to it on my account above all others I who had been the chief cause of it was a very hard proposition. Sir Redvers Buller, long Adjutant-General at the War Office, a man of the world, but also a representative  of the strictest military school, found it very awkward. He took two or three tours round the room, eyeing me in a droll manner. Then at last he said: "All right. You can have a commission in Bungo's regiment. You will have to do as much as you can for both jobs."
"But," he added, "you will get no pay for ours."
To this irregular arrangement I made haste to agree. 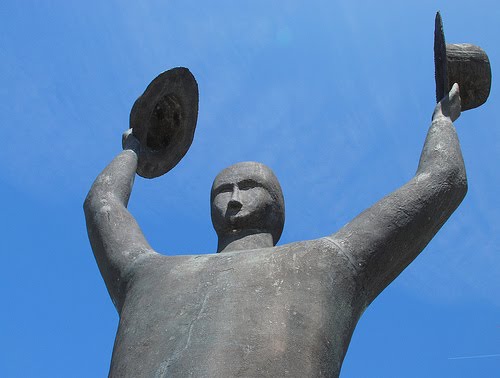 We also all know what is a "conflict of interests", when somebody's multiple activities (usually private and public at the same time) lead one to take decisions contrary to the interest of one of them (usually the public one, in favour of the private one). The case of Silvio Berlusconi, Italian Premier and owner of a media empire, of course comes to mind. But let's leave politics aside here. For a blogger the issue is rather whether one is capable or not of playing according to the rules of one's employer or scientific collaboration when exercising one's blogging activities.

I have faced the problem so many times, and taken right and wrong decisions so often, that I have learned to live with it. There are many sides to the problem. One is privacy: your colleagues may not want to be named, and you need to abstain from reporting conversations or other private situations; another one is being identified as speaking for the institution you are part of. These are issues that every blogger with a job has to face daily, and are not specific of scientific blogging, so I am not interested in discussing them here.

Does it damage science ? Does it conflict with research ?

So let us focus on scientific blogging: one issue is that at times I get reproached for discussing scientific results that are not yet public. Knowing the heavy punishments I would be subjected to if I were to blog anything even remotely internal of my own collaboration, I only indulge, occasionally, in the diffusion of non-official results when these come from experiments I am not a part of: I can then usually defend my actions by claiming that the fault is really with the experiments who leaked the information. In some cases this is a lame excuse, in others it is perfectly sound.

Take the recent affair of the superluminal neutrinos: when I published my piece on the OPERA result, the news had spread already in the corridors of physics departments worldwide, and had appeared in blog threads. Literally thousands of people extraneous to the OPERA collaboration already knew the details as I did or better than I did. In the matter of 24 more hours there appeared the first newspaper articles on the matter, and in three more days everybody tuned in to the CERN seminar distributing the official news.

So, I claim I did not do any damage with my post. But still, my employer forced me to take it down (it has been up again now since the news became public).

You may ask whether it makes sense or not for a researcher who blogs to try and be among the first to discuss a new physics result, with the correlated evaluations of whether the blogger is really doing this for his own vanity and personal success or whether he or she is doing it for the popularization of science. This issue does not interest me much -everybody is entitled to their own opinion on it; I can defend my own decisions, others do the same. But once we are past that, we need to answer another question, and try to determine whether this "aggressive blogging" behaviour damages science or not.

After the positive return of yesterday's post, I would like to turn this question to you, dear readers (you deserve the adjective since you got to read till these last lines in the long post). Is it acceptable for a researcher to act as a science reporter ? What negative impact may this have on his or her research activity ? Will his or her colleagues stop talking to him in fear of seeing the conversation published ? Does the early release of non-official results damage science, or create "media fatigue" (people getting fed up of announcements of new physics discoveries) ?

I would like to discuss this rather broad issue tomorrow (together with the related ones discussed yesterday), at the final day of the conference "Incontri di Fisica 2011", and I will be happy to report your opinion, if you take the pains to write a few lines in the comments thread below. If you provide your name and minimal info about yourself it is even better, since I will be quoting real people in my slides. Thank you!