Hontas Farmer
It seems that foreground galactic dust could be responsible for all of the signal observed by the BICEP2 team.  Two more shoes are waiting to drop.  Results of cross correlation and comparison of Planck data and BICEP2 data in the region BICEP2 was able to observe, and Planck's own  data  on the B modes.  For now there is reason to doubt BICEP2.  This story is so full of twist that this could change.

This was the big story. Gravitational waves had been detected by their effects on the cosmic microwave background.  The B modes had been observed with such a strong signature that they could only be explained by cosmic inflation.  A big echo of a big bang writ large on the sky.  What's more, the well financed international collaboration Planck had been beaten to the punch by the plucky underdogs of BICEP who braved the Antarctic cold to take their measurements.   There was talk of Nobel prizes for inflation and for the observations that confirmed it.
Now this. 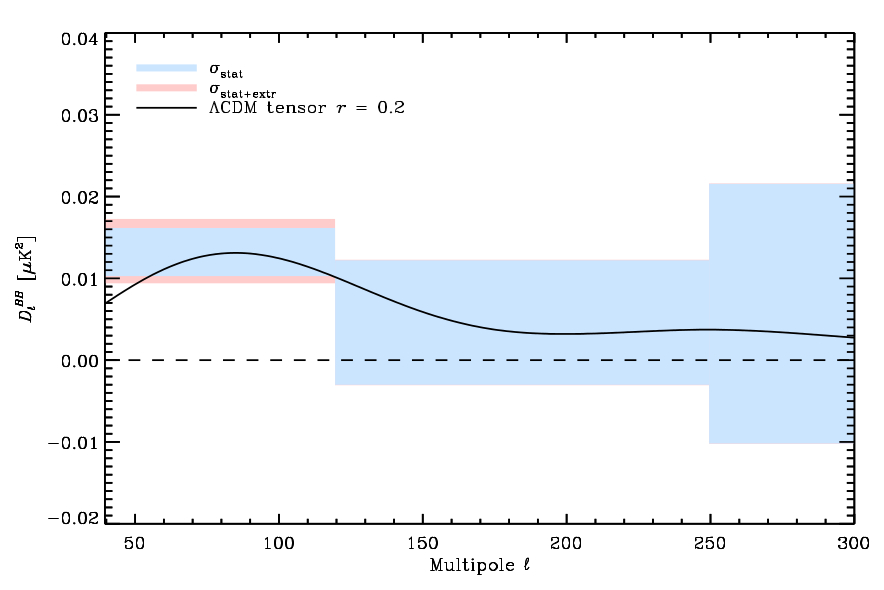 An figure showing the power spectrum in the region observed by Planck and BICEP.  The shaded regions are the current 2014 dust polarization data [arXiv:1409.5738] .  The solid line is a best fit provided by 2013 Planck data [arXiv:1409.5738] .  In 2013 a spokesperson for the Planck collaboration felt comfortable stating at the April APS meeting that the data indicated no strong signal of B Mode polarization at that time, even though more analysis was needed.  It seems his early read may have be proven right.

The cross comparison of BICEP2 and PLANCK data will tell us if there were any places in BICEPs field of view where they may have seen past the dust.  PLANCK also did a search for B-modes as BICEP did, but they were able to scan the whole sky. Depending on how those two observations pan out, either we will see evidence of B modes of a magnitude which is indicative of inflation or we will not.

I must state my own COI here.  One of the models I have been working on, one which is to appear in ScienceOpen Research requires inflation.  A model I've worked on much much more than the one which has been so controversial for me this last month.  So, if anyone would love to see a good strong inflation signal it would be me.

That said, it may be that there simply is no strong signal of inflation.  What will we do then? What will be the new standard model of cosmology? Perhaps some cyclic model or some big, bang less Eternal inflation of some sort.  By October or November we should know the answers.