Planck on BICEP2 "It turns out that the part of the dust had been significantly underestimated." UPDATED
By Hontas Farmer | January 29th 2015 05:09 PM | Print | E-mail

Tweet
Apparently, PLANCK says that BICEP2 did not detect gravitational waves.  The signal was mostly intergalactic dust.   That is my reading of a Google translate translation of an official Planck website.   This is even more tentative and un-reviewed than the arXiv postings that often set off a big story.  However, if this holds true it seems that BICEP2 did not indeed detect gravitational waves.  This may have officially finally settled the matter of BICEP2.

They took the original website down But here is a link to it on the wayback machine (http://web.archive.org/web/20150130013914/http://public.planck.fr/resultats/253-la-reponse-de-bicep2-keck-planck).  My sources now say that an official paper will be on arXiv by Tuesday.

Here are some more links which it seems are more official now that the cat is out of the bag.
http://new.bicepkeck.org/BKP_paper_20150130.pdf  A pre print which will be on arXiv in the very near future.

Here is a Planck collaboration website in English this time which explains the matter in simpler terms. Planck:Gravitational waves remain elusive.

The bottom line of these new links is the original headline has proven out.  BICEP2 did not in fact see CMB B-Mode polarization due to gravitational waves.  Most significantly BICEP2 not seeing them is as much of a negative for the simplest models of inflation as it was initially though to be a detriment to them. Right?  If as some Paul Steinhardt has said inflation isn't really science because it can never be shown to be wrong, then perhaps not.

What both of these observations were looking for in this case is B-Mode polarization in the CMB.  The B Modes would be caused by gravitational deformations (Tensor fields of which we only know of one fundamental rank 2 tensor field gravity).  This would set up a swirly pattern in the CMB which in a clean image of the CMB would have no other explanation.
In reality the image is not clean.  The CMB is obscured by the ordinary matter and radiation in the universe.  Planck has removed this interference using scans taken in multiple wavelengths and by adding and subtracting the signals using their super computers to filter out noise.  Stars and galaxies can be removed giving us a clear image of the CMB  Like so. When this is done not all of the noise can be removed.  This stubborn bit of noise is due to fine space dust.  That dust was best measured in separate dust maps by the Planck collaboration.

The Planck collaboration and BICEP2 eventually got together to cross compare their data.

This is the table released by Planck.

That r value takes all the complexity and makes it simple.  The bottom line,  According to this cross comparison of the data BICEP2 did not see gravitational waves.  Almost all of the previously reported BICEP2 signal can be explained by dust and what little remains is not statistically significant. 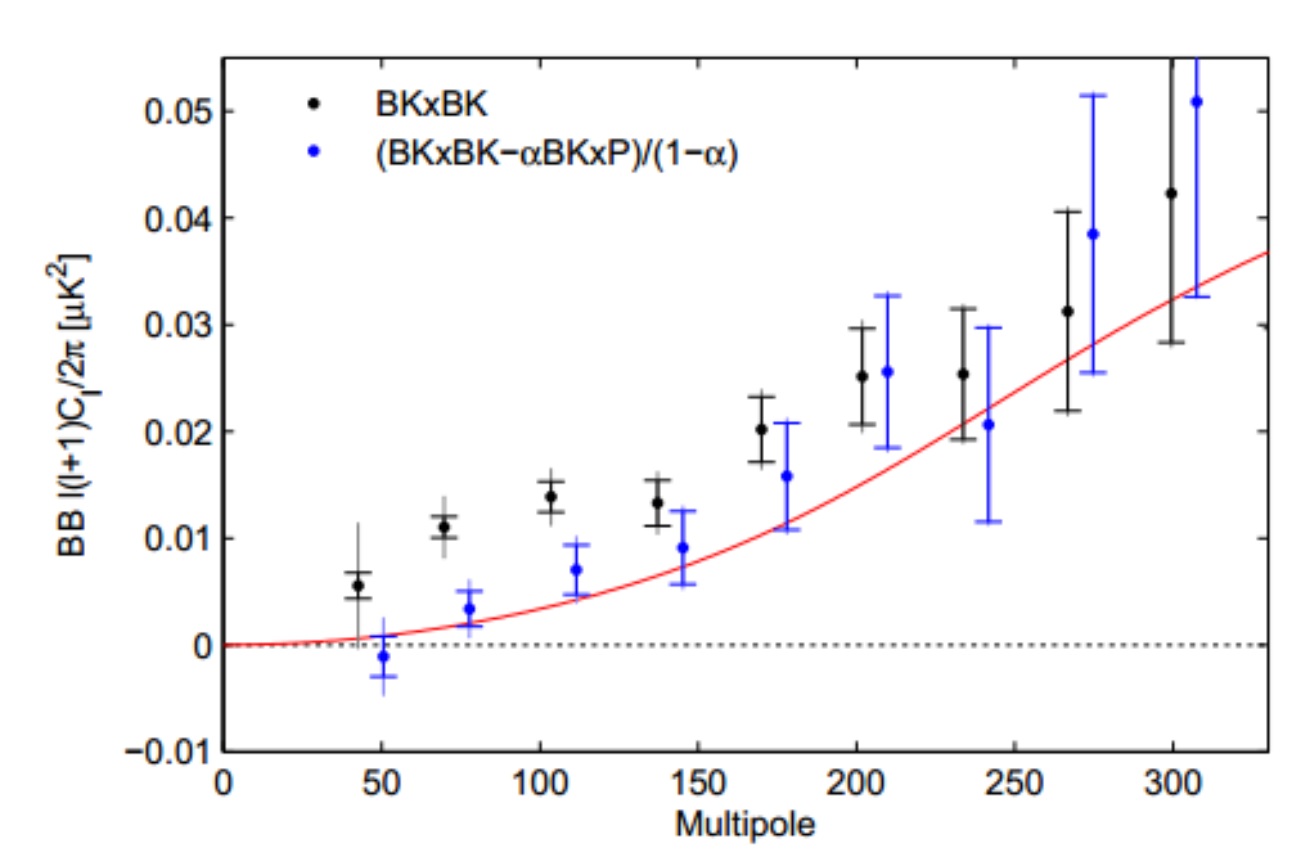 The red line is a model of the CMB polarization with b modes r=0  The combined data represented by the blue dots and their error bars fits the model with r=0.

Does this mean there aren't gravitational waves and no B-Modes will ever be found.

Planck is due at some point in the near future to release its own findings on B-Mode polarization.  BICEP2 could only look at high sensitivity at a small region of the sky.  Planck can look at the whole sky.  Perhaps they will find a clearer window through the dust and be able to see the B-modes.

If Planck does not see genuine B-mode polarization then theoretical physicist will have lots to think about.