14 days are left in my kickstarter and I have $55 in  pledges as of this writing.  However, I have discounts from the publishers.  This kickstarter may have influenced the prospective publishers of my papers to give me about $1000 in discounts.  So instead of using all the money for publishing instead I will use it to enhance my astronomy classes by the purchase of a large, computerized, reflecting telescope.

A computerized reflecting telescope would enhance my astronomy classes enormously.  For my last course students who chose projects based on direct observations had to buy or find binoculars and rig their cell phones to them to take images.  This worked quite well actually for observing objects such as the sun and moon.  However these young adults deserve better.  We could make more detailed observations of the sun and moon.  Furthermore, even in the city, Venus, Mars, and Jupiter may also be visible. 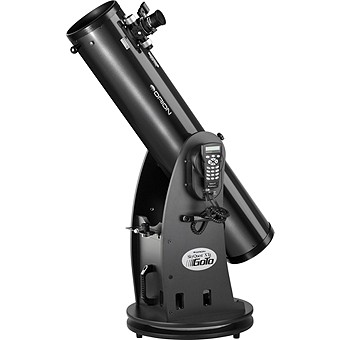 This is the telescope I have in mind or something fairly similar.

With such a telescope and some creativity I could supervise* some real student led research. I want to offer the kind of opportunity made available at four year colleges and there is no logical reason it should not be available to students at the community colleges.

The goal of half of community college students is to go to a four year after getting an associates degree.  The Associate of Science certifies that a person has basic competency in the fundamentals of whatever field they studied.  i.e. for physics one can assume they know calculus and newtonian physics and are ready to take on third and fourth year subjects.   In that sense, as people who already have some sort of degree a community college student should, on average, have more education at the two year mark than a four year student.   However due largely to low budgets is often not the case.

I want my astronomy students to be able to say that they have actually done some observing of astronomical objects.  Either directly or by way of downloading imagery from online databases.

As for the papers

The paper to appear in IJAA will appear as soon as I get paid when the semester starts for now it is on the ArXiv and has been for a year.  It is a long work based on my MS thesis.  Strong and steady and based on mountains of previously published data which has been combined to form maps.  Disk-outflow models as applied to high mass star forming regions through methanol and water maser observations

The paper to appear in Science Open depends both on my financing and on their approval of it.  Since they gave me a discount on the publication fee I can guess they want to publish it there.  This paper was the basis for an abstract which was accepted for the 2014 April APS meeting "Dark matter as an integral part of an alternative gravity model".

Last but not least I was made aware of another new Open Access Post Publication Peer Review and comment online journal.  "The Winnower".  After thinking about it for a while it seemed appropriate to publish my least tried and tested idea there.  Not as any kind of a slight to the winnower but to really test the OA PPPR system in a raw and real way.    I also knew that publication on such an open forum would give me, at least initially, scathing reviews which I could then use to strengthen the paper.   I used those initial reviews on my blog and on the Winnower to strengthen the final version.  Hontas Farmer, Quantum gravity by relativization of Quantum Field Theory., The Winnower 1:e140751.17561 (2014). DOI: 10.15200/winn.140751.17561

*On Kickstarter I have the word "do" student led research.  I just realized I would no longer do that level of work, I would be the one who officially supervises it.  Still adjusting to being faculty.

UPDATE:  It seems that after I published this update on kickstarter whoever had pledged $50 decided they did not want to support the project as modified.  Oh well.  I'm sure it will go up at the last minute.  That seems to be how most of these work.   Whether it will reach the goal of $2500 or not is another story.