Everyone has heard of the nutrient, nitrogen, but why is it important to plants?

It's a key ingredient in proteins, both in the grains (seeds) we eat and in leaves.  Nitrogen-starved leaves may turn yellow and have lower rates of [1] photosynthesis, which turns carbon dioxide from the atmosphere into new plant growth.

To keep food affordable and protect the environment, crop plants need just the right amount of nitrogen, but this is a challenge for both farmers and scientists. Too much nitrogen fertilizer on crops pollutes rivers and well water and its cost makes food more expensive. With too little nitrogen, yields decrease and the imbalance between supply and demand makes food more expensive.  Higher grain prices can also make it more profitable to clear tropical forests for agriculture.

Biological nitrogen fixation is a potential solution to these problems.  Legume crops like beans, peanuts, soybeans, and alfalfa get much of their nitrogen from symbiotic bacteria, known as rhizobia, which take nitrogen gas from the air and convert it into forms plants can use, like ammonia.  The carbon compounds the rhizobia need come from their plant hosts.  These resources could otherwise have been used to make more seeds, so legumes have evolved sophisticated mechanisms to support no more nitrogen fixation than they need.  When less-expensive nitrogen sources like ammonia or nitrate are available in the soil, legumes make fewer of the root nodules that house the bacteria and may even shut down existing nodules.

Could non-legumes also use nitrogen fixation somehow, with similar environmental benefits?  If so, would farmers save enough money on fertilizer costs to balance the yield decrease from diverting resources from seed production to nitrogen fixation?  Or might a more-reliable nitrogen supply actually increase yields, despite the energy cost?

Corn, wheat, and rice do not make root nodules, but some bacteria that live on or near their roots can fix small amounts of nitrogen.  In Nature Microbiology, Ryu et al. discuss genetic improvement of these bacteria.  They normally fix little or no nitrogen if exposed to oxygen, which destroys the key enzyme, nitrogenase, or if ammonia is available.  Ryu et al. were able to change these traits, but practical applications of their work are far from certain, even in the long term. 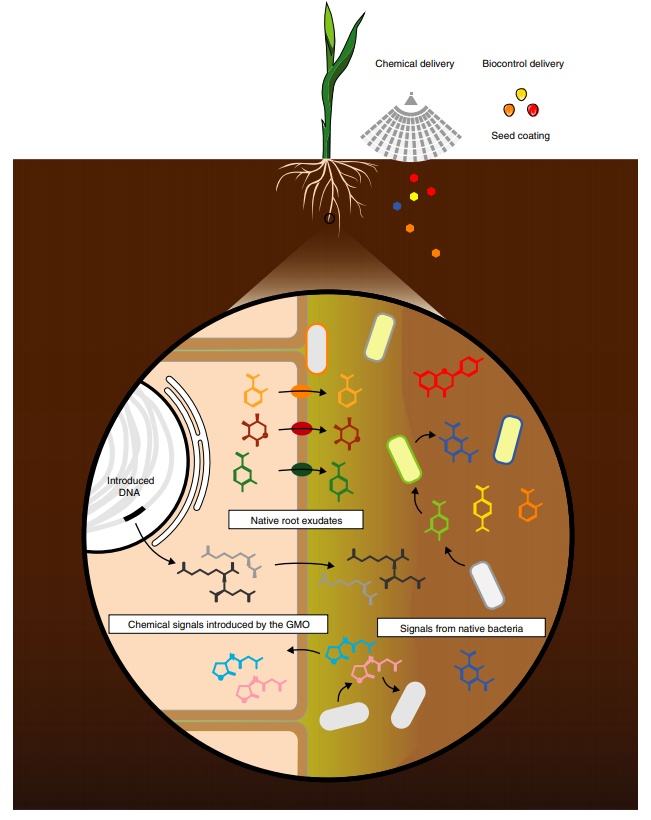 Knocking out repression of nitrogen fixation by ammonia may seem like a step backwards, from an environmental point of view.  After all, the ability of legume crops to fix no more nitrogen than they need is key to limiting nitrate pollution of our water supplies.  But we want nitrogen fixation rate to depend on overall plant needs, not just on ammonia levels around the bacteria.  So Ryu et al. engineered bacteria to adjust nitrogen-fixation rates in response to signals from plants.  Energy would still have to come from the plants, however.  Would the benefits of nitrogen fixation justify this cost?  Let's be optimistic and assume they would, initially.

But bacteria evolve.  Even if they provided nitrogen at a reasonable cost at first, benefits could decrease in only a few days.  The paper mentions the "fitness burden" of nitrogen fixation, causing rhizobia that fix more to die out.  A “cheating” mutant that fixed only as much nitrogen as it needed itself, with nothing extra for the plant, would free up resources for its own reproduction and take over.

Yet, nitrogen fixation by rhizobia in legume root nodules has persisted for millions of years.  What has limited the spread of rhizobial “cheaters”?  Legumes shut off the oxygen supply to nodules that fail to fix enough nitrogen, saving resources for the plant and limiting reproduction by rhizobial “cheaters.”  If we want corn, wheat, or rice to get much of their nitrogen from bacteria, they will need some such mechanism to shut down nodules that cost more than they are worth.

It may be more feasible to add nitrogen-fixation genes to new crops themselves, rather than relying on bacteria.  The crops would still have to pay nitrogen-fixation's high energy cost, but it might be worth it in at least some cases.

Oxygen would still be a problem.  Even moderate concentrations of oxygen can destroy nitrogenase, yet oxygen-based respiration is needed to meet nitrogen-fixation's energy needs.  In legumes, regulation of oxygen supply to the nodule interior helps solve this problem.  But some of the bacteria described in the Nature Microbiology paper fixed nitrogen in oxygen concentrations above 1%.

If this work points the way to oxygen-tolerant nitrogen fixation by plants, we might someday be able to grow corn, wheat, and rice without nitrogen fertilizer.

[1]It is in chlorophyll, but much more of it is in rubisco.  When plants don’t have enough N to make all the rubisco they need, there’s no point to make the full amount of chlorophyll, so they don’t.  Hence, yellow leaves.

Author of Darwinian Agriculture and an adjunct professor in the department of Ecology, Evolution, and Behavior at the University of Minnesota. I...