Petition To Youtube To Halt Ads On Doomsday Videos - They Make The Vulnerable Suicidal
By Robert Walker | September 18th 2016 05:38 AM | Print | E-mail

I've already done a petition to journalists on the issue of dramatized reporting of doomsday stories that make young children and vulnerable adults suicidal. This is another petition on the same topic, this time to Youtube. The  petition is to remove the ads from doomsday videos on the sane grounds that these videos make vulnerable young children and adults scared and suicidal and the ads provide a financial incentive to youtube users to make and reupload them. If you agree, do sign and share the petition. Here it is in full 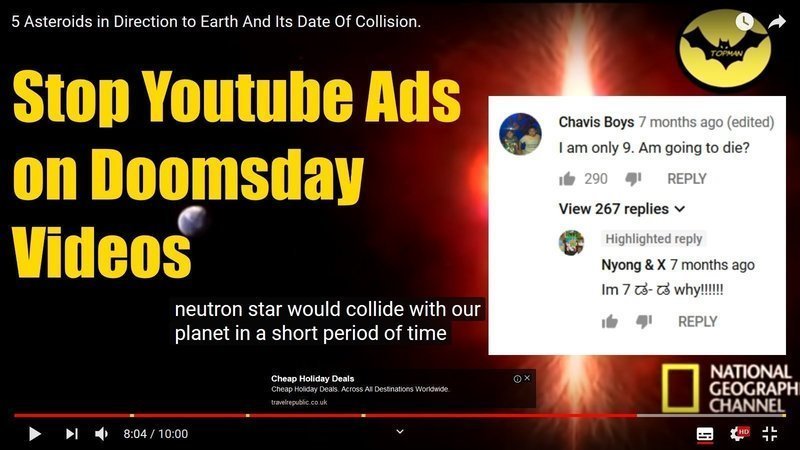 This petition was prompted by a video, with amateur graphics of "the earth reeling like a drunkard" along with other events of the Apocalypse with the title "Why The World Will End Surely on 29th July 2016 ? Shocking Facts".

This video was taken up by many news sites, even though it was an unauthorized upload of someone else's video with just the dramatic title  added plus a dramatic thumbnail. It got six million views as a result which gives it estimated earnings of $8000 to $22,000 from Youtube ads revenue, and it accrued 16,000 subscribers. This is for a youtube channel "End of Times Prophecy" with only that single video on it with different titles. They have now changed the doomsday date to a date in October and continue to accrue views and ad revenue.

The problem with these videos is that many people get genuinely scared by them. Young children and those who flunked physics at high school are especially vulnerable. So much so that some are suicidal. David Morrison, NASA astrobiologist and former director of the Sagan Institute first brought our attention to this issue in 2012 and coined the word cosmophobia for this phenomenon of fear of the cosmos - see this video.

I'm author of several articles debunking these stories and I get hundreds of comments from scared and sometimes suicidal people asking for reassurance and often what scares them most are youtube doomsday videos. There has been at least one confirmed suicide as a result of this cosmophobia and David Morrison says that anecdotally he was told of several more.

Youtube can do something about this. The ad revenue provides a strong financial incentive to unethical hoaxers and people of diminished responsibility to post more and more videos of this type.

The cover photo for this campaign shows an artist's impression from NASA of an alien sunset around a double star. It's often used as a hoax image of a companion sun to our sun. These hoaxes have become a form of propoganda for vulnerable people I think and just as with war propoganda and Orwell's 1984, when repeated enough times, they can convince vulnerable people that black is white. Many of these scared people even believe that we have two suns, utterly bizarre as that belief may seem to the rest of us. Many also think the Earth's pole has shifted and no longer points at the pole star and that this is the cause of most recent earthquakes, and that a hidden extra planet is causing the recent unusual weather instead of climate change.

I have had many long conversations on my article comment threads trying to persuade them that this is all nonsense, with more than a thousand comments (including my replies) on the article with most comments.

For instance this summer in the run up to the 29th July date in that youtube video title, I got many question from people who thought we would all die on the 29th July, made worse by a story about it in the The Telegraph online dramatized with a countdown timer to the end of the world at the head of the article. In December 2015 I got many questions also from people who thought we'd all be dead by Christmas, asking if there was any point in preparing for it. Another occasion with numerous such messages was the build up to 24th September in 2015, and there have been several others just in the last year. Most of you won't even have heard of these "events" or if you saw them dismissed them as LOL silly but for these people they were terrifying.

When they are told these things repeatedly with dramatic videos, and music, and supported with all the power of oratory in the voice over, vulnerable people lose their ordinary common sense and come to believe we actually have two suns and that the second sun is a threat to Earth along with many other such bizarre beliefs. Some of them have to give up work because of this anxiety, are anxious day and night, and may sometimes even take their own lives. We must do all we can to stop this somehow!

Youtube, please do what you can to help with this. Please halt all ad revenue on these videos.

It's an international petition, so anyone can sign. To sign it visit the petition page on change.org and then add your signature there. Thanks!

If you have any comments about this petition, or questions do say so below. You can also read the comments posted to the petition by others who have signed the petition.