First this site has never been used for missile launching. It has only been used for satellites as part of North Korea’s ambitious civilian space program. They want to become one of the few countries able to launch satellites to geostationary orbit.

Although it could be used for a missile test, this seems unlikely. One suggestion is that it is to have more things to offer to demolish as part of future negotiations. Other suggestions include signaling impatience with the pace of negotiations, and a chess move to ratchet up pressure on Washington. It is not an attempt to do anything in secret as they know the world watches everything they do here. Whatever their reasons, they are doing it intentionally for show.

This is another article I do about events in the news that scare people, looking at them calmly using the best sources I can find on the topic and avoiding the exaggerations you get in the sensationalist press and sometimes in the mainstream press as well. It is to support people we help in the Facebook Doomsday Debunked group, that find us because they get scared, sometimes to the point of suicide, by such stories.

There are various ideas about why they are doing it. If they wanted to do a missile test they could do it in a much harder to detect way, since they can now launch them from mobile launchers. So it is not likely to be a build up to a surprise missile test. They could do that without alerting anyone using mobile ICBM’s. They know the world is watching and so it has to be some kind of a signal.

Perhaps the most likely suggestion I’ve seen is that it is to rebuild the buildings to make it more of a media event when they blow it up, if negotiations go well. Kim originally announced that he would demolish this site as a unilateral confidence building promise to Trump in the June summit and after that then progress went well to start with, but when they hit hitches in discussions with the US negotiators after the summit about such matters as sanctions and declaration of peace between North and South Korea, then it stalled.

So, perhaps he feels he needs more things on his side to deal with and wants to turn this into something that they can present as a major additional concession in future negotiations rather than just a good will gesture? After all he has already blown up the nuclear testing facilities as a unilateral gesture.

The North Koreans are especially keen on media and presentation and that seems a likely suggestion. Another possibility is a chess move in the negotiations and diplomacy with Washington. Or, a similar suggestion, it might be Kim signaling that he is getting impatient with the slow progress at Hanoi.

For the meeting itself see my

There was no formal agreement to dismantle this site. It was a unilateral confidence building measure that Kim announced in the June summit.

So, though it is sad that he has gone back on this, it doesn’t mean they are about to resume missile tests immediately, or at all. It doesn’t have much to do with testing missiles

Jenny Town managing editor of the site that published the satellite imagery tweeted:

No ballistic missiles have ever been launched from the launch pad at Sohae/Tongchang-ri. It has only ever been used for satellite launches. The activity happening at Sohae now, while unfortunate, only shows construction going on, not anything that would indicate test prep.

If no ballistic missiles have ever been launched from the launch pad at Sohae/Tongchang-ri, why is the activity happening at Sohae now is unfortunate in your opinion?

The images show that North Korea has replaced some roofs on buildings and rebuilt the engine support structure and built the rail mounted transfer building one segment taller than before.

The North had previously started to dismantle the rail-mounted transfer building on the launch pad along with the engine test stand last year at the beginning of US-DPRK negotiations. … However, based on commercial satellite imagery, efforts to rebuild these structures started sometime between February 16 and March 2, 2019.

They can launch ICBM's from mobile launchers so wouldn't need to do this for missile tests. So it wouldn’t be needed for a surprise missile test which is very unlikely because they are still in talks with Washington and both sides left the last summit leaving the door open. 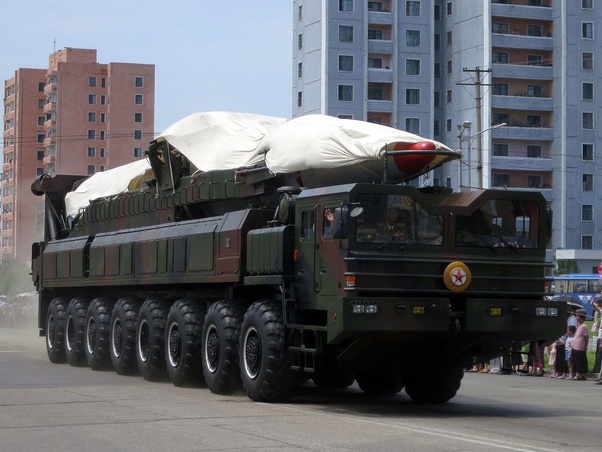 They continue to have a lot to gain in negotiations and it doesn’t seem likely they would be about to lose all that by going against Kim’s promise not to do missile tests. They stopped the missile tests at just the right point, with their ICBM’s not yet tested for re-entry, just a flight or two short of the point where the US would feel seriously threatened, at the best point for negotiations.

Dave Schmerler told CNN they could theoretically use the engine test stand to improve the engines (i.e. in static firing tests). But that doesn’t seem too likely to be an objective right now.

He also said it could be that it is a chess move to ratchet up pressure on Washington. They are well aware that we are watching every move via satellite so it is not something they are trying to keep hidden, it is some kind of a message, the chess move idea seems likely to me.

Another possibility mentioned by a South Korea lawmaker to the Washington Post under conditions of anonymity is that they could be preparing for a media event by restoring structures that can be dramatically blown up if the talks with Washington go well.

Here are the quotes I’m using as sources:

Dave Schmerler, a senior research associate at the Center for Nonproliferation Studies specializing in satellite imagery analysis, said that the more notable development is the work being done to the engine test stand, where Pyongyang could theoretically improve the engines on its nuclear-capable missiles.

It's also possible that the activity at the facility is a chess move in North Korea's negotiating strategy, Schmerler said, to ratchet up pressure on Washington.

One of the South Korean lawmakers who attended the intelligence briefing said Wednesday that NIS director Suh Hoon said the structures being restored at the launch site include roofs and building doors.

The lawmaker requested anonymity because of the sensitive nature of the information.

He quoted Suh as saying that the move could be preparation to restart long-range rocket launches if nuclear diplomacy completely collapses, or could be an attempt to add structures that could be dramatically blown up in a show of denuclearization commitment when U.S. inspectors visit if negotiations with Washington go well.

Joel Wit, a North Korea proliferation expert who helped negotiate with North Korea in the mid-1990s, said the new work at Sohae is Mr Kim’s way of showing that he is “getting impatient with lack of progress in negotiations”. Trump still hopeful of North Korea nuclear deal despite activity at launch site - Independent.ie

Dr Shin Beom-chul of the Seoul-based think-tank Asan Institute for Policy Studies told The Straits Times that North Korea would not risk staging a provocation if it still wants to engage in talks with the US. "They are just trying to shake the Trump administration into coming back to the negotiating table."

Dr Hoo Chiew Ping of National University of Malaysia said it was a "timely action post-Hanoi". "The Kim Jong Un regime is clearly unhappy. Hopefully this is a signal to the US to indicate willingness to continue negotiation, so as to prevent renewed interest in restarting provocations," she told ST.

Dr Shin said Mr Trump might be using his security chief to pressure the North to provide a road map towards denuclearisation.

"Tension will go on for a while. Both sides need to cool off and rethink their negotiating strategies."

After Hanoi, remember the risks of not engaging North Korea - Bulletin of the Atomic Scientists

ON THE NORTH KOREA SPACE PROGRAM

They want to launch satellites into Geostationary orbit. Not many countries can do that. They have a new rocket motor they tested that they think can do this and it was a highlight of his new year speech in 2017-8.

I think it is genuine space ambition because it would get them commercial success as well as prestige. I've suggested that a good way forward would be to make a combined space agency with South Korea who also have a launch site and launch satellites with a launch site closer to the equator which would be useful to North Korea as you get more boost from Earth's rotation from sites near the equator so need less fuel.

They could make a very nice combined space agency and what's more it would employ the NK missile experts who otherwise would lose their jobs and might well go to other countries to help them develop missiles or nuclear weapons. It is much better to transition to peaceful nuclear power and peaceful space technology than to just stop them both and one way to do that which would help make sure they are doing it right is in association with South Korea who speak the same language and they would be working together in the same facilities and US trusts South Korea of course.

But it is rather early in the process for them to do peaceful satellite launches without arousing US suspicion as they have often been accused of developing satellites as a way of acquiring ICBM capabilities and there may be some truth in it.The eventual dissolution of the agreed framework was partly because NK asserted its right to do peaceful space launches.

This is a tricky matter that is likely to be a key point if they get that far in negotiations. Trilateral negotiations involving South Korea as well as the US later on may help with this.

This is an article I did about it: