Campi Flegrei Is Not Ready To Collapse - Thousands Of Years Into The Future Most Likely - Also Not Quite A Supervolcano
By Robert Walker | December 16th 2018 06:50 PM | Print | E-mail

There are many sensationalist stories today about this research. But they were looking at the past history of this volcano. Not the present. It is not ready to collapse right now and is closely monitored. Likely to be centuries to millennia before a collapse if one is possible at all - it may have ended that phase too. A normal eruption would be devastating for local people and it is closely monitored. It probably did not make the Neanderthals extinct but the 2–4C global temperature reduction for a couple of years might have helped modern humans to get an edge over the Neanderthals at a critical time in the past.

For local people an eruption there would be very serious indeed. However the volcano is closely monitored by the Vesuvius Volcanic Observatory and they would evacuate the area if there were possibilities of a serious eruption. There hasn't been one for thousands of years.

The last major one was the Agnano Monte Spina eruption (about 4,100 years ago).

Background to that study:

However the new study is saying that it may have entered a new phase which may at some point, at some indeterminate point in the (far) future lead to a larger event than that - that one is bad enough I know.

However not expected any time soon.

The study, published today in Science Advances, may be of particular interest to the 1.5 million people living within the bounds of the volcanic complex. Fortunately for them, there’s no indication that this massive event will happen any time soon. Volcanic eruptions like this can take thousands of years to develop, and there’s no way for volcanologists to tell when, or even if, this particular type of eruption will occur. Still, it’s a fascinating and rare look at the innards of one of the most dramatic phenomena on Earth.

The researchers conclude that magma under Campi Flegrei may be entering a building phase, “potentially culminating, at some undetermined point in the future, in a large-scale eruption,” the team writes in their study

To be clear, the volcano is not currently heading for catastrophe. Researchers actively monitor the system and understand the cues that could signal pending eruptions. Any hypothetical massive blast would likely be far in the future, possibly thousands of years or more.

Is Italy's 'supervolcano' filling with magma? Get the facts.

The paper is here

The last major eruption happened 40,000 years ago. This map shows the dispersal of ash, not laval. Note that the heights of the ash layers are in cms. Large areas are covered in more than 10 cms of ash. Some patches in more than 50 and more than 20 cms. This however is not likely to happen any time soon, not for thousands of years most likely. The new research suggests it just possibly may happen some indeterminate time in the future. 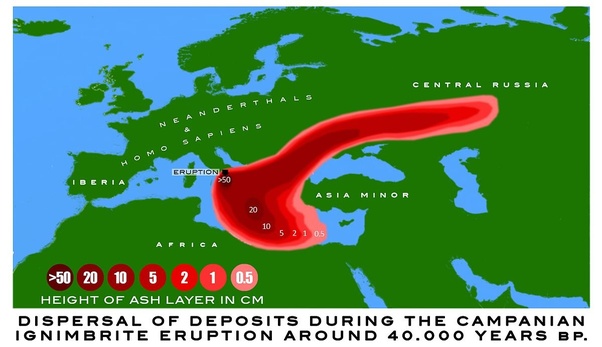 In that thousands of years distant future the ash fall isn't that bad anyway. At 10 cms then it means flights grounded during the eruption, need to wear masks to keep out the dust from your lungs, but it is not enough for structural collapse of roofs of buildings. You might not necessarily need to evacuate the area. Farmers would probably want to take their animals indoors during the eruption, and it would of course impact on agriculture if during the growing season but on the other hand the ash is fertilizing.

For details of effects, see

(and remember this one doesn't quite count as a supervolcano)

This is about a study to see if the last eruption could have made the Neanderthals extinct. The answer was “no” but it could have helped modern humans in competition with Neanderthals for a couple of years at a critical point when populations were already low.

In their climate simulations, Black and colleagues found that the largest temperature decreases after the eruption occurred in Eastern Europe and Asia and sidestepped the areas where the final Neandertal populations were living (see map to right). Therefore, the authors conclude that the eruption was probably insufficient to trigger Neandertal extinction. ﻿

﻿Ah, but the cold spell

However, the abrupt cold spell that followed the eruption would still have significantly impacted day-to-day life for Neanderthals and early humans in Europe. Black and colleagues point out that temperatures in Western Europe would have decreased by an average of 2 to 4 degrees Celsius during the year following the eruption. These unusual conditions, they write, may have directly influenced survival and day-to-day life for Neandertals and anatomically modern humans alike, and emphasize the resilience of anatomically modern humans in the face of abrupt and adverse changes in the environment.

Did a Volcanic Eruption Kill Off the Neandertals? Science Determines: Sorta