China is currently targeting a 20% non fossil share by 2030, and there were reports that it is expected to target 35% of electricity from renewables by 2030 according to drafts for its next plan, the “Renewable Portfolio Standard”.

More recently on 29th June 2019, China together with France also made a series of significant climate pledges

They agreed to on the importance of zero emissions, to update their pledges in 2020 as a progression beyond the current pledges, the importance of maintaining biodiversity, and the need to fully fund and support the $100 billion Green Climate change fund and advanced technology transfer to developing countries to help them mitigate climate change as well as adapt to it.

Some of the main points:

Carbon brief's comment on this is here: China pledges to strengthen climate plan

Another study finds that China is already on its way to peak emissions earlier than it pledged to (its current pledge is to peak before 2030). This was based on a study of its cities. Bejing peaked in 2007.

This study found that the decarbonization of Chinese cities depends on their GDP, that as the GDP increases, decarbonization is easier (a pattern found in other countries too). If the country as a whole progresses in the same way as the cities, China's emissions may peak between at 13–16 gigatons of CO₂ per year between 2021 and 2025, approximately 5–10 years ahead of the current Paris target of 2030.

That study is here

Carbon Brief's comments on that study are here:

China has built a major new renewables industry, with vast solar farms, hydro power and UHVDC power lines linking the renewables together across the country. 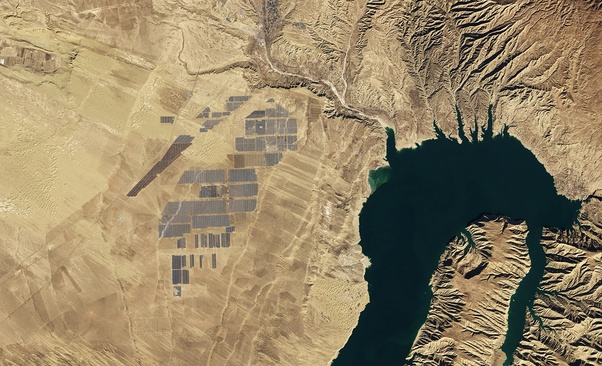 The 850-megawatt Longyangxia Dam Solar Park. It is built right next to a big hydropower dam - because then in the day when the sun is shining the power comes from the solar powers and the dam ramps down. At night then the dam then releases the water it held back during the day.

This more than doubles the power output from the hydro electric and because the hydro can store power until it’s needed, like a giant battery, this means there is no curtailment - it never produces more power than is needed.

Partly because of the Chinese initiatives, we now have low price solar panels throughout Asia Prices of solar panels and wind turbines continue to fall, faster than previous estimates, and of batteries also.

The Committee on Climate Change’s report: Net Zero The UK's contribution to stopping global warming, puts it like this:

One of the most positive and important developments since 2008 has been the very rapid cost reduction that has accompanied the global expansion of renewable electricity generation (especially for wind and solar power) and an accompanying fall in the cost of batteries.

They share this remarkable graph of the current and near future projected costs of onshore and offshore wind, and of solar-PV in the UK - both Solar-PV and the onshore wind are actually already competing with the lowest cost fossil fuels, without subsidies. Offshore wind is rapidly headed that way too. And this is for the UK which spans 50 to 60 degrees north, yet already is able to produce solar PV power competitive with fossil fuels:

And - yes we can have a power system entirely based on renewables. We don’t actually need coal fired power stations or nuclear power to balance the variable output of renewables. Indeed those can’t ramp up and down fast enough. We can use fuel cells or molten salt to store power. Once electric vehicles are commonplace, they could earn money for their owners all the time they are parked, by automatically buying excess power from the grid and then selling it back again when renewable power levels are low. However, the easiest and least cost way to provide the peaking power right away is through hydro power, pumped hydro which can respond instantly and has vast potential (including using water pumped between lower and higher levels in disused mine shafts).

One myth about renewables is that we don’t have enough space for them. But actually we have plenty of space for them, and they do not take away good agricultural land or land for conservation, not if done properly. Solar panels raised above the ground can be mixed with agriculture, they can be built on house roofs, on brown fields, on low conservation value areas of desert, or floating on canals, lakes and other waterways (especially useful in hot dry conditions as they help reduce water loss through evaporation).

Hydro electric plants are often situated in deserts, and if well planned, do not need to take away good agricultural land.

Wind power doesn’t have much of a footprint at all, and off shore wind, and off shore solar (a very new development with just small pilot plants so far) have no footprint on the land at all.

One particularly useful synergy comes from putting floating solar on hydro dams, where it also helps to reduce evaporation and can double the power output of the hydro without any curtailment because of the way the hydro can rapidly respond as peaking power

And if you are concerned by effects on wildlife, it’s true that there can be effects, but this just means they need careful siting. The concerns are real and they do need care, but they are based mainly on very early examples of each, built before the problems that could arise for such installations were fully understood.

This is all very promising for the next opportunity to renew the Paris pledges in 2020, something they do every 5 years by the Paris Agreement.

That was one of the important innovations of the Paris agreement. Countries pledge to commitments that are ambitious but feasible, then as they gain experience, which can include winning over venture capitalists and private citizens buying renewables, starting new industries for electric cars, and renewables, retraining workers for the new industries, changing habits of their citizens, get experience running their first ever multi-gigawatt renewables power stations, and so on.

Meanwhile the technology benefits from new research and economies of scale, and prices of renewables fall. After five years of this, it's expected that they find that they can increase their pledges, and again, and again. And this is indeed happening, many pledges will definitely be increased over the initial targets already in 2020.

This is based on an extract from my new article:

IPCC Has No Scientific Cliff Edge Of 12 Years To Save Planet (or 18 Months) - Should They Challenge Deadline Misreporting?

This expands on some of that, and goes into other things such as resources and energy return on energy invested for fossil fuels compared to renewables

For good reliable reporting on climate change, you can try Carbon Brief. I've read many good articles from them. For positive eco news to brighten up your day, and remind yourself that good things as well as bad are happening in the world, try this website: