It's only 0.11% of UK greenhouse gas emissions and there are replacements already in use industrially as we ramp down to zero emissions by 2050.

This is a known problem, the technology to solve it has been in development since 2016 and in commercial use since 2016. Although it's only a fraction of a percent of emissions, it is important for the future as we ramp down to zero emissions. There is nothing here to be scared of, and we can still use renewables. This is another click bait article by the BBC that’s being shared widely on twitter today. Dozens of shares. 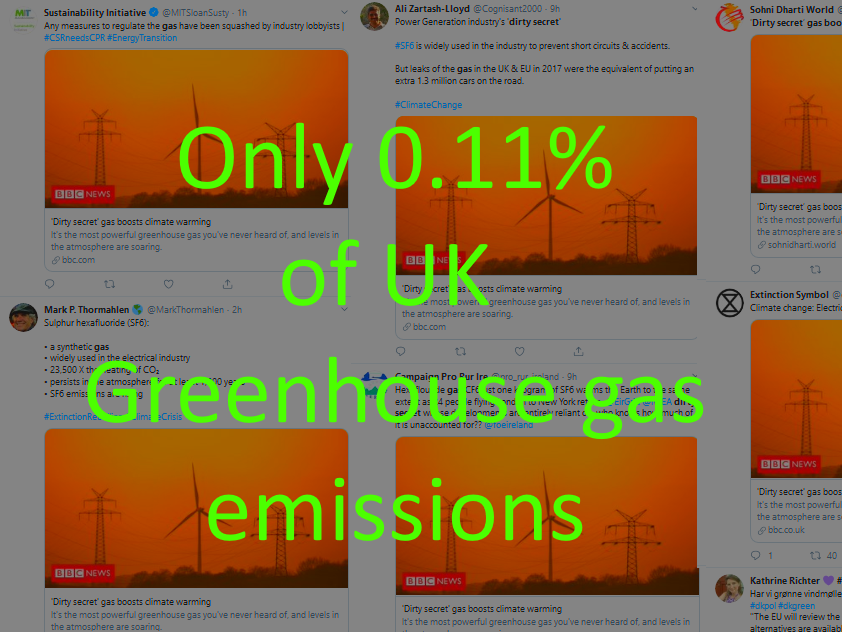 It's the most powerful greenhouse gas known to humanity, and emissions have risen rapidly in recent years, the BBC has learned.

The main issue is that they do not explain to the reader that this gas contributes only a fraction of a percent of greenhouse gas emissions.

Another thing they do not explain is that many new projects now use a replacement gas called g3 which has been in development since 2010 and first used commercially in 2016.

This is another article I'm writing to support people we help in the Facebook Doomsday Debunked group, that find us because they get scared, sometimes to the point of feeling suicidal about it, by such stories. Do share this with your friends if you find it useful, as they may be panicking too.

The gas they are talking about is SF6 or sulphur hexafluoride which is a non conducting insulating gas used for circuit breakers, switching gear and gas insulated lines. It is a very powerful greenhouse gas, so although the amounts released are minute, we still need to reduce it even further.

However the contribution to total emissions is tiny. Significant when you want to get right down to zero emissions but not exactly the highest priority. In the UK, in 2017, it amounted to 0.11% of greenhouse gas emissions.

NOT A NEW PROBLEM - THE GREEN GAS FOR GRID, G3

It is not a new problem. Industry has been working on a replacement since 2010.

Starting in 2010, GE's Grid Solutions business collaborated with 3M to develop Green Gas for Grid, (g3, pronounced "g" cubed), an insulating medium for HV switchgear with the same technical performance, same dimensional footprint and same ability to operate in ambient conditions as SF6 (down to -30 degrees Celsius), but with 99 per cent less GWP.

They do not mention this, except to say

“However, for medium voltage operations there are several tried-and-tested materials.”

Perhaps by that they are referring to g3?

There is no patent on the gas, allowing manufacturers to develop their own solutions and it is tested up to 145 kV for gas-insulated substations:

g3 is now fully type-tested and commercially available, and the portfolio includes gas-insulated substations (GIS) up to 145 kV, gas-insulated lines (GIL) up to 420 kV and air-insulated switchgear (AIS) current transformers up to 245 kV.

The mixture is also available for all HV switchgear manufacturers wishing to develop SF6-free HV products above 52kV.

Green gas for the grid

It has 98 percent less impact on global warming than SF6. It was first installed for a gas insulated line at Sellindge in England in 2016.

Details of the gas here

This will reduce the emissions for Selindge over 40 years from 7,247 tons of CO2 equivalent right down to only 48 tons. 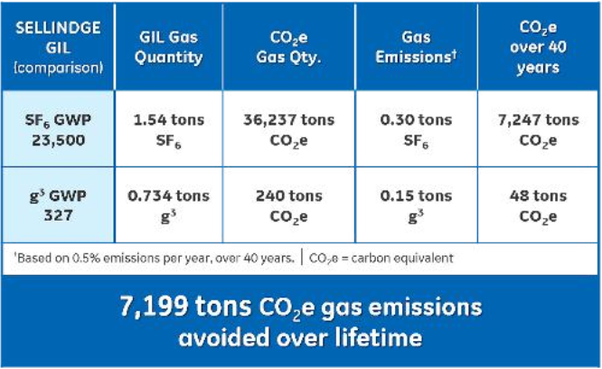 That report from says

The BBC article also mentions use of vacuum based switching gear for high voltage applications such as wind turbines.

Siemens is making 102 units of SF6 free gas insulated switchgear for the Anglia One offshore wind farm for 2019.

The other thing you can do is to reduce the leaks of SF6. This is about work to reduce SF6 leaks in the US:

"If we can move to a world where we are not using SF6 at all, this is clearly a better way of managing the problem, rather than using a damaging gas and having to manage it,"

Green gas for the grid

The EU is committed to reduce all the fluoronated gases rapidly over the next decade.

According to the EU Environment Agency,

Fluorinated greenhouse gases reported under the United Nations Framework Convention on Climate Change accounted for approximately 3 % of overall greenhouse gas emissions expressed in tonnes CO2 equivalent in the EU in 2016.

They say that the phase down remains on track. The black dots here are the targets: 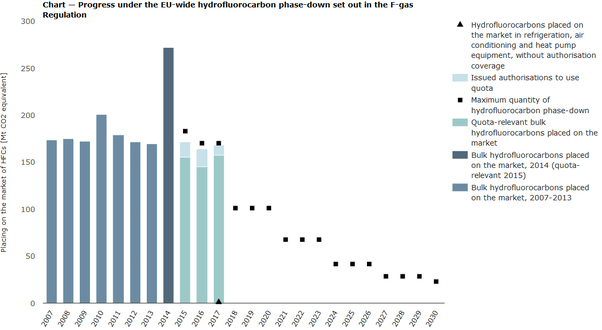