The Daily Express run this fake meme on many of their fake asteroid stories. It is riddled with errors and outright lies. The red top tabloid papers in the UK are well known for just making stuff up.

The most famous red top tabloid story which ran in The Sun, another similar paper here. They made up the story that Freddie Starr, a comedian ate a hamster in a sandwich. He never ate any hamster.

We get so many people scared of asteroids as a result of the fake news about them in the Daily Express. They say, a dozen times a year or more, that NASA has issued an asteroid impact warning about some random harmless asteroid. I thought maybe showing this Daily Express meme with all its mistakes next to a typical Daily Express story might help readers from other countries understand what kind of a paper they are reading here.

Google should simply never run stories like this as "News". Or at least they should label them in some way so that readers know what kind of a thing they are dealing with. Even labeling them is not enough - ideally they should provide us with a way to filter them out as they make the search results for some topics useless even when you know they are bullshit.

For instance if we ever have a genuine NASA asteroid warning, and viewers use Google news to find out mare, it may be hard to tell which is the genuine one amongst the pages of Google news stories about fake asteroid warnings - well over 100 and typically the top 100 results are all fake news from the Daily Express. 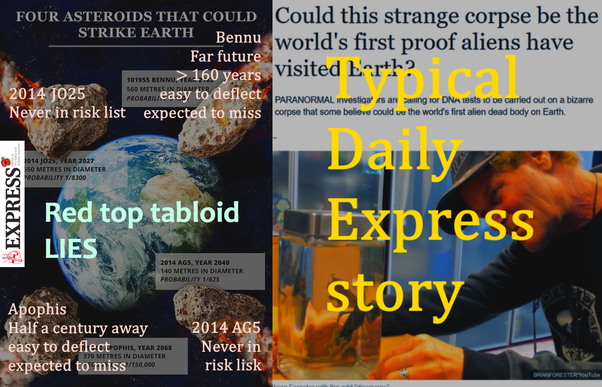 This graphic is shared in many Daily Express fake NASA asteroid warnings e.g.

2014 JO25 and 2014 AG5 are real asteroids. Everything else about them, except that they are asteroids, is made up.

The probability to hit is just an invention by a sensationalist journalist. Have to be as they were never in the NASA risk list. Not even as a removed object.

The dates are made up too. Not just close approach dates. 2014 JO25 for instance doesn’t have a close approach table which means it never gets close to Earth this century.

Here is where it is at the start of January 2027 when they claim it will hit: 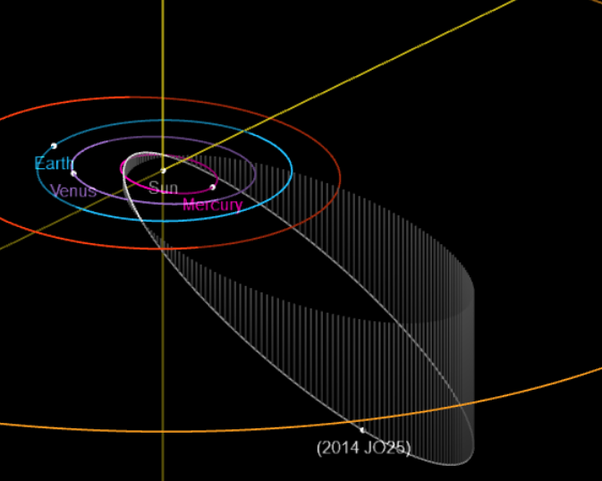 It moves really slowly as it has an orbital period of just short of three years and throughout 2027 it is moving at its slowest at the furthest part of its orbit. By December 31st it is here: 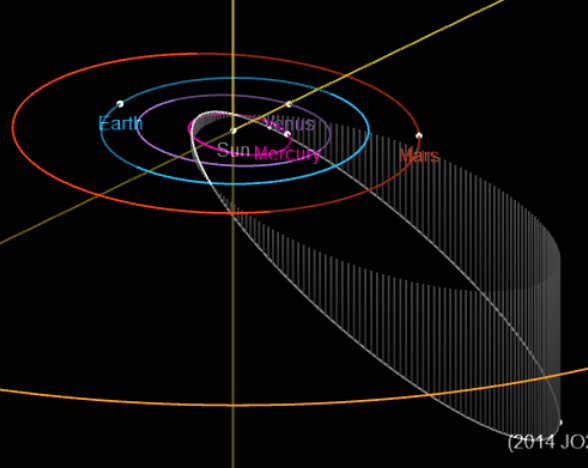 So they never had any such dates.

They can’t have just made a mistake there. Just picked a random asteroid name and added a made up date and probability. Here is the page on my non techy version of the CNEOS Sentry table, which interrogates the data servers at NASA using their published methods for doing it:

It has links to the JPL Small-Body Database Browser page and orbit diagram. 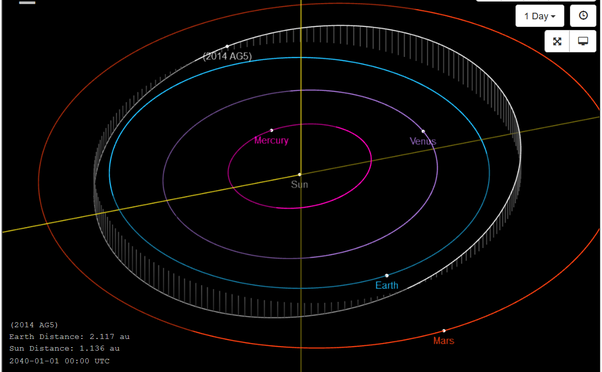 It has an orbital period very similar to Earth but notice the big gap between Earth’s orbit and its orbit - and it gradually drifts around relative to Earth. 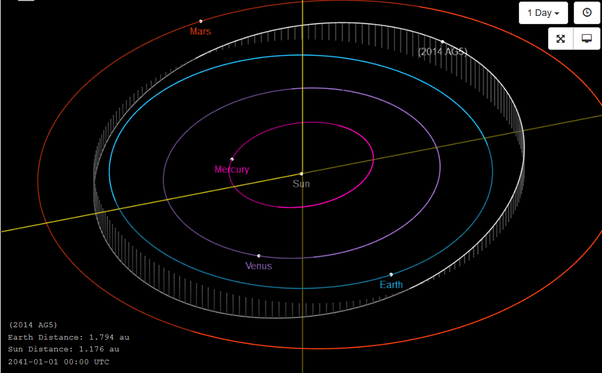 It never comes anywhere near Earth in 2040. Another of these cases where it is nearly as far as it can possibly be from Earth during the time of its supposed risk of hitting us.

To put that in perspective then to go the same distance as the closest point that 2014 AG5 will be in 2023 would mean circumnavigating Earth 1,335 times.

Traveling at 659 miles per hour in a 747, the fastest commercial airliner, it would take 2098 days, or about five and three quarter years to travel that distance, traveling day and night without stopping for refueling.

There is no way this is a mistake. It’s just lies.

Bennu and Apophis are real asteroids. Bennu is over 160 years in the future, easy to deflect, expected to miss and the probability to hit is wrong

The details for Apophis are correct but it’s half a century away. It is easy to deflect, expected to miss, does a close flyby in 2029 during which we will refine its orbit and probably prove it misses in the future. In remote chance the refined orbit still is a hit then it is one of the easiest of asteroids of all to hit because it does frequent close flybys and just the tiniest of nudges before the flyby, even by a sheet of micron thin reflective solar sail material spread over a small patch of its surface is enough to change a hit into a miss by a safe margin a decade later.

This is a typical Daily Express story 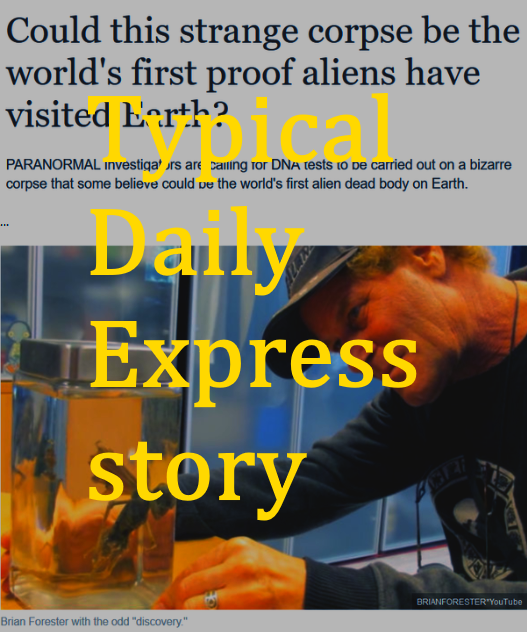 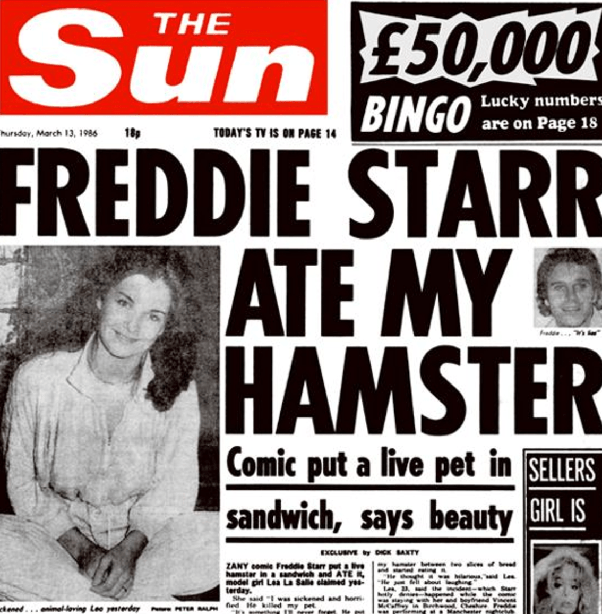 Famous story by The Sun, a red top tabloid like the Daily Express.

About the Daily Express

To hear me talk about this in a video click here:

OUR PETITIONS FROM THE VIDEO

To Journalists: Debunk Rather than Dramatize "Doomsday" Stories - Vulnerable Get Suicidal

This is the Daily Express story I debunked:

Save us from the giant spaghetti monster :)

skip to A miss is a miss

or What is a potentially hazardous asteroid (PHA) or come? or What is a NEO? or How does the Sentry table work?

or Why small asteroid tsunamis don't travel far or debunks

If the Egyptians had build an asteroid detection telescope back at the time of the Great Pyramid of Giza, over 4,500 years ago - it would still be waiting for its first "city killer" asteroid. 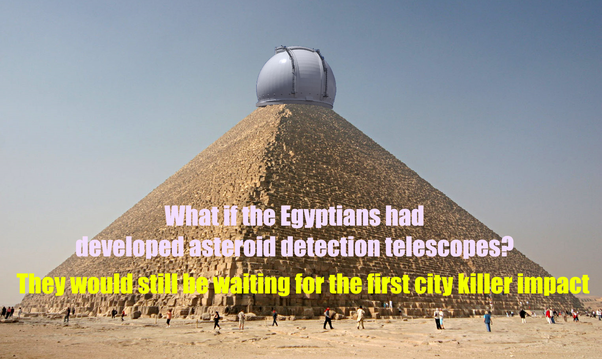 Combines photo of Kheops-Pyramid with one of the two Keck ten meter telescopes Linked Hawaiian Telescopes Catch a Nova Surprise (I know the top of a pyramid in Egypt is hardly the best place for a telescope, this is just for visual effect to show the idea). They were only a few key insights away from the industrial revolution in some ways. It's a not impossible alternative history :).