This is surely going to be one of the 93% of bills that never make it to law. First there is his op. ed. and surely this is not serious:

First his “maybe we’d be better off if Facebook disappeared.” is part of an argument. He is saying we need to be tough on social media and not let ourselves be shoved around by them.

Confront the industry, we’re told, and you might accidentally kill it — and with it, all the innovation it has (supposedly) brought to our society.

Maybe. But maybe social media’s innovations do our country more harm than good. Maybe social media is best understood as a parasite on productive investment, on meaningful relationships, on a healthy society.

It's just an op ed. Not even a proposal for a law. You have free speech in the US, people are permitted to say things like this and they do not have to be sensible and sometimes they may be a bit tongue in cheek to make a point. 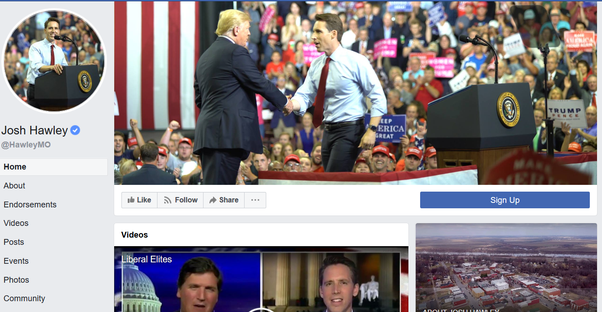 Then there’s his proposed bill. There is no official text yet but there is a draft:

The bill outlaws endless scrolling or auto play of videos on YouTube without prompts before each one, unless the main purpose is to stream music.

Then it has this timer requirement with a built in limit of 30 minutes. You can switch it off but it switches back on automatically each month. After the 30 minutes is over you can no longer use the internet for social media (unless you switched it off previously).

Also - apparently even if you switch it off, it still pops up every 30 minutes telling you how much time you’ve spent so far on the internet.

(3) provides users with regular disclosures, including immediate disclosures when prompted by the user, of the amount of time the user has spent on those platforms across all devices, broken down by day, week, month, year, and platform; and

93% of bills don't become law, and I get the impression that for some of them, the people who propose them are not really serious at all, just trying to get attention. It might even be his main reason for doing this is for the newspaper headlines

The idea of that prompt especially - and an enforced one - is plain silly (unless I have misunderstood the idea). Surely unconstitutional as well though I don't know the in's and outs of why but it's one of those things where you don't think he can be serious, just trying to trigger some debate about internet addiction and what we can do if anything.

It is interfering with their ability to engage in normal internet activity. It is none of the government’s business how much time someone spends on the internet.

Practically, as he describes it in that draft, it would be not something any website could do. It would have to be built into every operating system, nobody else except your own computer can know how much time you spend on the internet and then to work out if it is social media - and it's tantamount to forcing an institution approved app onto every computer.

The only alternative to installing it on your computer would be to have a system of sharing your details online amongst all the online social media platforms and that would only work if they also shared your ip address and even then it wouldn't be a sure thing because most of us don't have static ip addresses.

Basically it is impossible for social media companies to know for sure if someone on one website is the same person as on another without very very invasive analysis to e.g. check the timing of the posts and even then it wouldn't be sure as there are often several people sharing an ip address if they are all on the same network, in a house or small business say, even on the same computer.

Another complication is the use of multiple accounts on the same platform. For instance Twitter has no requirement to disclose a real world identity, nor does YouTube. So you could have a dozen accounts on each, but for this to work they would have to figure out which of those identities are the same person across both all your ids on Twitter and YouTube, and on Facebook, Instagram etc.

And it would mean e.g. a small business in the middle of trying to chat to customers, or trying to close a sale suddenly a popup warns them they have been talking to their customers for over 30 minutes.

Also what if I already have an app to stop me spending too much time on the internet? So that one keys in and this one as well?

Lawyers would get involved if it ever seemed to be getting anywhere, probably already at the first committee and I don't know how exactly it would be but pretty sure it would count as restricting your digital rights and be unlawful.

However though his method doesn’t make sense as a law, he is trying to tackle a real issue. Psychologists are starting to recognize it as a condition.

For an academic look at it:

Internet Addiction: A Brief Summary of Research and Practice

For help with recognizing whether you have an addiction and how to cope, and self-help tips:

Also it is true that the social media sites are designed to keep users engaged as much as possible - which may have the potential to encourage internet addiction.

If you are getting addicted to the internet, then endless scrolling feeds may feed your addiction, but for those who are not, they are just useful.

There may be other things that can be done to reduce internet addiction. Maybe this will morph into another bill that is actually feasible.

Basically where it goes wrong is that it is diagnosing everyone as suffering from internet addiction and giving a blanket solution to prevent this addiction.

If it was optional - e.g. a prominently displayed menu option like the Screen Time app - or a question in a menu “Do you have internet addiction” and if you go there you have these optional tools you can switch on to help you, it would be very different in flavour, maybe it could pass as a bill? That all social media should offer help to internet addicts.

More generally, there is no hidden agenda to destroy the internet. The article 17 is what it says on the tine, that is how laws work. The lawyers assess cases by what the law actually says not by what people may have been thinking when they voted for it, which they can never know. The issues that concern the politicians include

They do not want to destroy the internet. They use it themselves as do their colleagues, staff, businesses they are involved in, friends, relatives.

They do want to make it a safer place and do something about fake news and these other issues.

Josh Hawley wants to do something about internet addiction, but his bill doesn't seem serious, or it is at least not well thought through.

Some of them want to do something about terrorist content. Others about copyright infringement (but not memes just illegal copying). Others about promoting self harm and others about fake news.

Those are all things that just about everyone would agree on.

They do not want to restrict freedom of speech.

Note, that Facebook and all the others are already blocking content without any overview. They blocked one of my websites and I have no redress, no way to get them even to explain why they did it (I don't know why, my best guess is it might be because I shared a post to a group of climate skeptics and it got so many reports from them that Facebook's spambot decided it is harmful content).

They also prevent me from uploading breathing gifs to help peoplle to breathe slowly when they panic, one from DestressMonday which makes them available for anyone to use and one that I made myself so I know I have copyright for it. So, they already have htose upload filters and this one is preventing me from helping people because their dumb algorithm has decided it is spam or something.

In both cases, reported it as a mistake but they never reply. I don't know if a human even saw my reports, tried many times.

So, if article 13 / 17 becomes law in the UK as it will be, they would have to explain themselves.

So it has it's plus side. You shouldn't jsut believe the narrative of YouTube or Facebook who make themselves out to be the good guys who are protecting your freedom. They have been proven to not be able to police themselves adequately in many recent incidents (e.g. Cambridge Analytica, Instagram self harm, etc). . If they had been better actors this would never have happened but there have been a series of incidents that made it clear to politicians they have to do something and this is what it is all about.

If Facebook, YouTube, Twitter etc had been more responsible and careful in their dealings with their users then politiicans would never have felt the need to do anything about it.